With the prestigious Hoophall Classic just a little over one month away, its ESPN broadcast schedule was announced earlier today. Held annually during MLK weekend in Springfield (MA), the showcase hosts the cream of the crop of high school basketball. Check below for announcement and broadcast schedule from the event organizers:

The Naismith Memorial Basketball Hall of Fame announced today the broadcast schedule for the 2016 Spalding Hoophall Classic, an annual basketball showcase now in its fifteenth year. Games will be played at Blake Arena on the campus of Springfield College January 14-18, during Martin Luther King, Jr. weekend. The nation’s premier high school basketball event will once again showcase the top basketball teams from across the country with local teams taking the court on Thursday and Friday.

The Cube will live stream local games on Thursday and Friday, as well as select games throughout the weekend. The headlining matchups will be televised live by ESPN on Saturday and ESPNU on Monday. Live stats will be available for all games via GameChanger. A full game schedule with broadcast information can be found on page three. Links to The Cube and GameChanger will be available the week of the event on www.thehoophallclassic.com.

“For the past fifteen years we have been fortunate to host the top high school teams in the nation at the birthplace of basketball, Springfield College,” said John L. Doleva, President and CEO of the Naismith Memorial Basketball Hall of Fame. “We expect this year’s field to be especially competitive and we thank our media partners for allowing us to share this exciting event with fans outside of Springfield.”

The Spalding Hoophall Classic will feature several Class of 2016 Top 100 players including four of the nation’s top six according to ESPN: Jayson Tatum (Chaminade, MO), Harry Giles (Oak Hill Academy, VA), Malik Monk (Bentonville, AR), and Bam Adebayo (High Point Christian, NC). A total of 25 players out of the ESPN Top 100 in the Class of 2016 will participate. 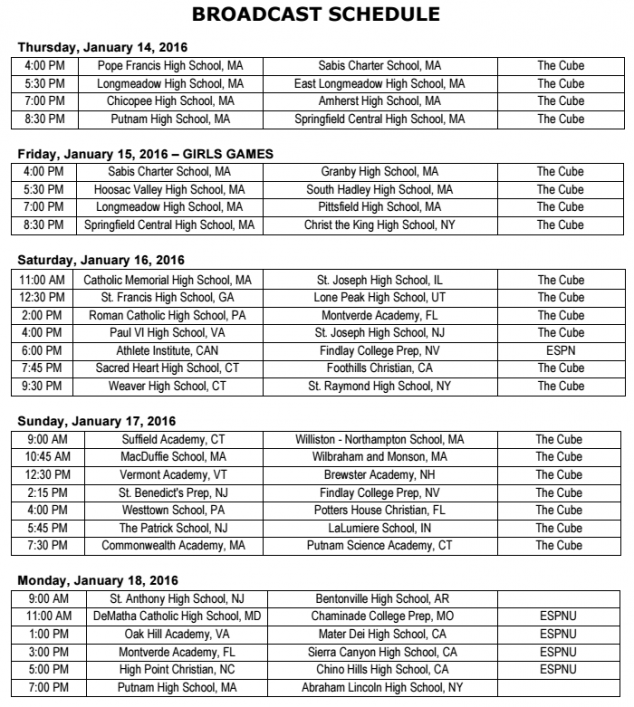