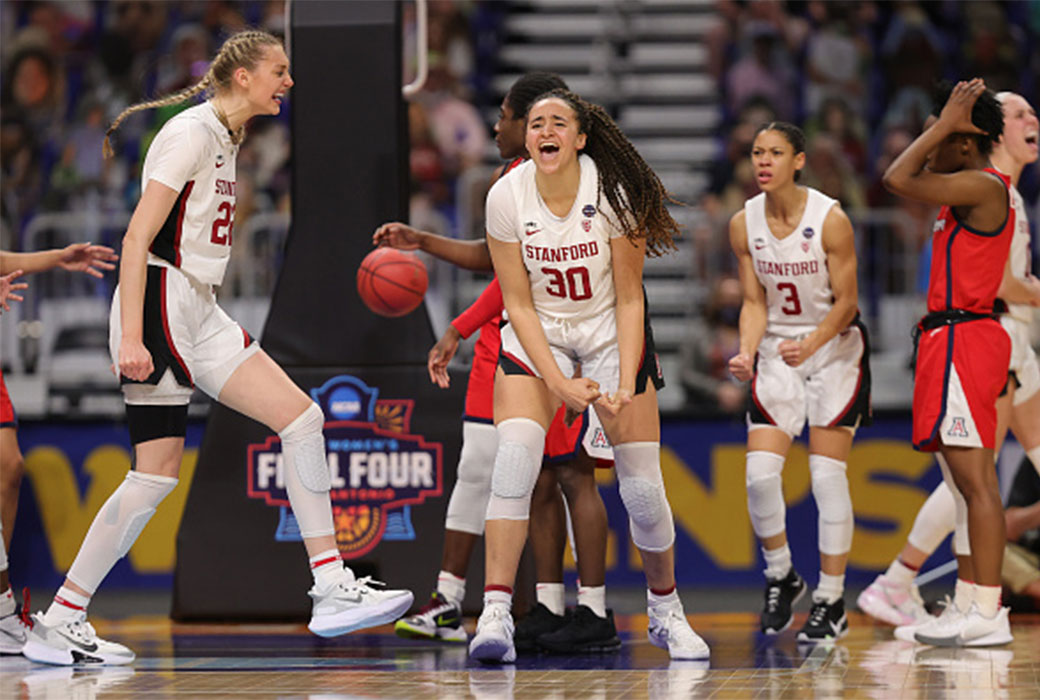 After 29 years, Stanford are national champions yet again.

In a game that came down to the wire, No.1 seed Stanford defeated Arizona on Sunday, 54-53, to win the title. This is the first time that two Pac-12 women’s basketball programs have met in the national championship.

In what was a game of runs, Stanford jumped out early—leading by as much as 11, and then 16-8 after the first quarter. However, Arizona would quickly get back into the game, thanks in part to their physical defense.

Arizona, who forced 21 Stanford turnovers and managed to snag 12 steals, went on a 13-4 second-quarter run. They managed to have a brief one-point lead with 4:55 remaining in the half.

Yet, as soon as Arizona made a counter run, Stanford answered right back—helping the Cardinals go on an 11-3 run to give them a seven-point lead at halftime, 31-24.

Lifted by their strong work on the glass, Stanford used their size as an advantage and was able to keep possessions alive and get second chances.

Throughout the third quarter and the beginning of the fourth, Stanford continued to hold the lead and controlled the game. The Cardinals stretched it out to a nine-point lead, 49-40 with 7:32 left after a made jumper by Haley Jones.

Once again, Arizona fought back just as they had all tournament long. Aari McDonald hit two major threes to give the Wildcats within a one-point margin with under three minutes remaining.

Haley Jones‘s clutch three-point shot and an and-1 finish gave Stanford a four-point lead with 2:24 remaining, yet Arizona’s defense came in strong with some key stops and, yet again, McDonald stepped up on the offensive end. Three late free throws from McDonald cut the lead to 54-53 with 37 seconds left.

During the final 6.1 seconds of the game, Arizona forced a shot clock violation and the Wildcats had one final shot for a chance at the title.

Everyone who was in the Alamodome on Sunday and watching it at home, knew who was getting the ball for the Wildcats. Aari McDonald, who finished with 22 points, carried this Arizona team to the national title game, and it was without a doubt her shot to take.

Despite the missed attempt, the Wildcats proved that not only do they belong in the tournament but that they can compete for the National Championship.

Meanwhile, Stanford was led by solid contributions from players on both ends of the floor. Sophomore Haley Jones, led the Cardinals with 17 points and was honored as the tournament’s Most Outstanding Player.

Jones also elaborated on the difficult obstacles this Stanford team had to go through, and the perseverance this group showed through it all to come out on top.

“It was a long, very difficult journey being on the road, sleeping in hotels, living out of your bag. It’s just a lot. You’re on the bus, you’re on planes all the time and there’s just never really an end in sight so it’s difficult,” Jones said. “But I think from that experience and losing on the road and dropping one at home, I think it just really kind of grew this extra like chip on our shoulder almost.”

Another key for Stanford was the defense guard Anna Wilson played on Aari McDonald. It won’t show up in the stat sheet, but it was the difference-maker in the game. Wilson has been locking up players on defense all year for the Cardinals, and it was no different in the championship game.

Wilson made it difficult for McDonald to get into any type of rhythm out there.

“Having Anna Wilson on me, them jumping at everything, just making it kind of difficult for me,” said McDonald, Per ESPN. . “I would pretty much say it was the same [as the first two meetings]. Just more physical this time.”

In a championship that was simply built on pure resiliency, Stanford never got discouraged during this atypical season. The Cardinals used their depth on and off the court to overcome adversity all season long.