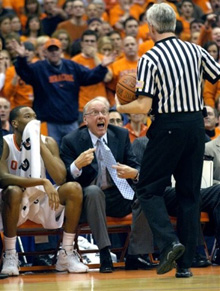 In 34 years head coaching the Syracuse Orange, Jim Boeheim has won more than 800 games, guided the Orange to the 2003 National Championship and has been inducted into the Naismith Memorial Basketball Hall of Fame.

In between crucial victories over Providence and Villanova, I spoke one-on-one with Coach Boeheim on an appropriately snowy Syracuse day in late February, we talked about the ‘Cuse, the team, and his outlook on life.

At the beginning of the season, saying the Orange had a chance to be the top men’s college squad in the country would have been laughable. But consistent strong play and recent losses by Kansas, Kentucky and Purdue, have propelled the Orange into the No. 1 position in both the A

P Top 25 and the ESPN/USA Today Coaches Top 25 Poll. At 27-2 overall, and 14-2 in the Big East, Boeheim has led his team to yet another Big East Title. As the tournament approaches, his Orange look poised.

SLAM: You just came off an impressive 2nd half offensive explosion after trailing Providence 52-47 at the half. What did you say at the break to motivate your players?
Jim Boeheim: I told them to play defense, instead of just playing offense. We were watching them shoot threes and they were making them. So, we just had to do our job. That was the whole message at halftime.

SLAM: How would you describe this team’s character?
JB: I think you’ve got a lot of veteran guys, leadership from our seniors, and a good blend with the younger guys. This is a team that’s very focused on what they want to do. They have enough experience to know how to do it, and they have enough talent to be able to get things done.

SLAM: I don’t know if you’re aware of the wager between Andy Rautins and Scoop Jardine—
JB: No, no. [Laughs] I’m not.

SLAM: OK, well, they’re betting on who’s going to finish the season with more dunks.
JB: [Laughs] I’d bet 0-0, but Andy stuck one in the other night.

SLAM: Who do you think’s going to win?
JB: Well, Andy, he’s a little bigger, a little better jumper, so I would take him.

SLAM: You were a walk on at Syracuse in the 1960s. Do you think you could have walked on to this team?
JB: Well, I might have walked on—I might not have played very much. We have four or five guys, non-schol

arship players on our team, and we only have 11 scholarship players, so we always have three or four walk-on guys, guys that are non-scholarship players…You know, I can certainly walk on. I don’t know if I can work my way up into playing time, but I’ll give it a shot

SLAM: Do you think you can beat Andy Rautins in a shootout?
JB: No. [Laughs] No, I don’t.

SLAM: Tell me a little about what makes Brandon Triche so effective as a first-year player?
JB: Well he’s a very physical freshman. He’s been working on his body for four years. He’s played in a very good high school program for four years, they won two state championships, so he knows how to win. He knows how to make plays to win games. He’s been an outstanding freshman.

SLAM: What kind of impact does the addition of the Carmelo Center have on the team in terms of practice and training?
JB: I think it’s a tremendous facility for us. Here we have two courts, we’re able to do extra things in practice, we’re able to do more shooting drills. The training room and the weight room being next to the court is a huge positive. I think the whole building has made a difference in our win-loss record. I think we won more games than we would have without it.

SLAM: With March right around the corner, do you change the way you approach the game? Practice routines?
JB: Not really. We practice a little less when we’re playing a lot of games. But, we try to keep ourselves as prepared as we can. Keep working on the things we need to work on, get ready for the next game, whatever it may be.

SLAM: How do you know when to be harder on a player—when to ease up?
JB: Well…I think that’s a great question. We handle everybody a little bit differently. Some guys need more of a push I think than others, but I don’t think the hard approach works that well—anymore. We try to use it on a very limited basis.

SLAM: What’s the hardest part of your job?
JB: I don’t know. Every job there are a lot of difficult parts to it. There’s not one thing I would look at and say that’s really hard.

SLAM: Between now and when you played, what would you say is the biggest difference in the game today?
JB: I think there’s more good athletes today than there ever has been. Every team has good players. There’s just a lot more good players.

SLAM: How do you keep the team strong on the road?
JB: We try to go out to dinner the night before we go on the road, if we can. Find a good place to eat, relax for one night and then…the worst thing in coaching, the day of the game, waiting for the game. That’s the hardest time.

SLAM: Tell me a little about the New Children’s Foundation.
JB: We do as much as we can with different groups in the community that work with kids. We do some initiatives on our own: building courts, helping kids get sneakers, we’ve got a couple different things.