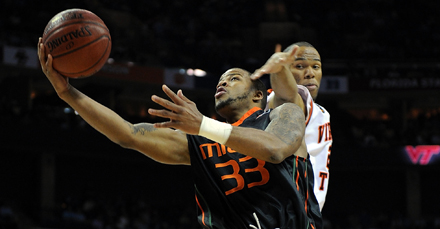 If you go through the player photos on the University of Miami’s basketball roster you get the usual mix of smiles and blank stares. There is one face that sticks out though: Jack McClinton. His lips are pursed, and you can almost catch a glare at the camera. That look says it all.

You’ll have to excuse McClinton if he seems somewhat intense, but for a player who has always been overlooked and counted out, he has never had the luxury of easing up on the throttle. Even after a junior season in which he became the first Hurricane to earn First-Team All-ACC honors and Miami reached the second round of the NCAA Tournament, McClinton and his team are still largely overlooked in college basketball circles.

“Sometimes even now people will come up to me and ask ‘Hey, you guys are still in the Big East right?’” McClinton says.

No, despite what you may have heard in the past, Miami basketball is a full fledged member of the ACC and a team to be reckoned with. The ‘Canes began the season ranked 17th in the AP Poll and were picked fourth in the ACC pre-season poll, just a few votes shy of third place Wake Forest. The new found respect for The U amongst basketball writers is due in large part to McClinton, but don’t think the senior is going

to get complacent, not with the journey it’s taken for him to get here.

After four years at Calvert Hall in Maryland, McClinton’s mailbox was largely devoid of any letters from major college programs.

“I don’t want to say he was insulted,” says Miami Associate Head Coach Jorge Fernandez, “but I think it bothered him that he wasn’t recruited by schools like Maryland, Georgetown and George Washington. None of the ACC or Big East schools in the area really paid attention to him.”

Looking to make himself more appealing to larger programs, McClinton spent a year at renowned basketball factory South Kent Prep in Connecticut. While he was overshadowed by teammates Andre Blatche (Wizards) and Dorrell Wright (Heat), the sharpshooter did enough to impress Siena head coach Rob Lanier and earn a scholarship. McClinton made good on Lanier’s faith, earning MAAC Rookie of the Week honors six times in addition to leading the Saints in points, three-point percentage and minutes played.

Just when it looked like McClinton was well on his way to becoming an elite mid-major performer; his journey took another drastic turn when Siena fired Lanier–a decision that spelled the end of McClinton’s relationship with the school.

“Coach Lanier was a major reason why I committed to Siena and when he got fired I felt like I needed to part ways,” says McClinton.

Things wouldn’t be that easy, though. Initially, Siena put a hold McClinton’s release from his scholarship, making it impossible for him to communicate with other schools due to NCAA regulations. Seemingly stuck with no options, McClinton’s father took up his son’s cause and compiled a highlight tape. Among the individuals to receive the package was Miami head coach Frank Haith who liked what he saw, told Fernandez and the rest of his coaching staff and extended a scholarship offer to McClinton.

“One thing Frank noticed on that tape is Jack is a great shooter,” says Fernandez. “You can never have enough shooters on your team. Especially in the ACC, such a high caliber conference, if you can put good shooters out there it’s going to allow you to compete.

Much like he did with his opportunity at Siena, McClinton took a chance at Miami and ran with it. The senior toyed with opponents last season, averaging 17.7 points while connecting on 42.7 percent of his attempts from beyond the arc. His 91.9 percent free-throw shooting was the third highest mark in ACC history. He was at his best in conference play; reaching double figures in all but one contest, including a season best 34 points against Virginia, a game that included 7-12 shooting from beyond the arc.

Now, McClinton is faced with the challenge of continuing to build on his own success while leading Miami deeper into March than their second round exit last year. But the question is, will anyone notice? The overall feel from the ‘Canes is one of indifference to the public perception of the program.

“To be honest with you, we don’t make a big deal about it,” says Fernandez. “Coach Haith has told the kids to not let anyone outside the program label who we are. At the end of the day, all that matters is what we do together as a team. I’m a big believer of this; when you win, everything else kind of takes care of itself. If you don’t win, all that other stuff doesn’t matter, because people won’t look at you in a good light.”

McClinton is equally nonchalant when it comes to discussing his own anonymity. Rather than letting his national obscurity become irksome, he has used it as a motivational tool. Don’t for a second think that McClinton doesn’t come out for each game looking to prove a point.

“Every night out I play with a chip on my shoulder,” says McClinton. “I’ve been counted out my whole life, I’ve always been a player put on the backburner. All of that has forced me to work that much harder.”

That hard work led to invitations to attend several camps this summer including the Steve Nash Skills Academy and the Lebron James All-American Camp. Perhaps the most valuable experiences for McClinton though came closer to campus where a number of current and former pros showed up for pick up games. Former Miami Heat point guard Jason Williams took McClinton under his wing during the summer sessions.

“On the court he’s real flashy, but he really understands the game,” says McClinton. “Being around him and learning from him, it was a great experience.”

He’ll be able to put those lessons to good use in an ACC that is sure to be treacherous terrain this season. McClinton admits neither he nor the team can sneak up on opponents this year, but that isn’t worrying the senior. Coach Fernandez says that while McClinton may not have a highly decorated resume like some other players in the conference, there is one thing about the battle-tested guard that shouldn’t be overlooked.

“A lot of times people overlook the character of a kid; his heart and passion for the game,” says Fernandez. “Those things can’t be measured. Jack took the hard road, and that’s fine. Everything that he gets, he’s earned. Let’s face it, sometimes there are people out there who get accolades they don’t deserve, but because they’ve had a name since 9th grade they get it. This guy was an unknown who made himself into what he is. His work ethic is unmatched from what I’ve been around.”

For McClinton, it’ll be business as usual again this season, one of the best kept secrets in the nation, picking apart defenses with his deadly shooting stroke. He isn’t worried about the attention, or lack there of. He isn’t concerned with Miami’s ranking, although he certainly doesn’t mind it. McClinton will simply do what he has always done; dig deep for that drive that took him from an unknown Baltimore product, to an All-ACC performer.

“I was just born with a big heart and the determination to work hard,” he says. “I think from a young age, always being on the backburner, it always added fuel to my fire.”

A fire Miami hopes will push it well into March.