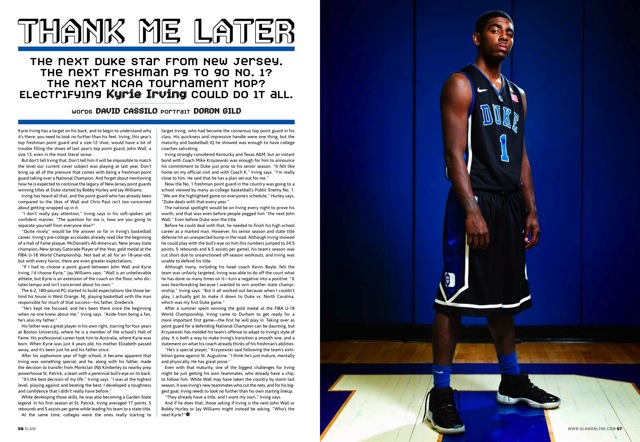 When we were planning out the latest issue before the season started, we took a leap and chose Kyrie Irving for a feature story. He hadn’t played a game at the college level and with a rough start, his inclusion could have easily backfired. But we were confident that Irving would make our decision stand up. As SLAM 144 hits stores around the country, Irving’s name is also reaching a national level after an impressive 31-point performance against Michigan State on Wednesday night. Putting Irving in the issue? Easiest decision we ever made. — Ed.

Kyrie Irving has a target on his back, and to begin to understand why it’s there, you need to look no further than his feet. Irving, this year’s top freshman point guard and a size-12 shoe, would have a bit of trouble filling the shoes of last year’s top point guard, John Wall, a size 13, even in the most literal sense.

But don’t tell Irving that. Don’t tell him it will be impossible to match the level our current cover subject was playing at last year. Don’t bring up all of the pressure that comes with being a freshman point guard taking over a National Champion. And forget about mentioning how he is expected to continue the legacy of New Jersey point guards winning titles at Duke started by Bobby Hurley and Jay Williams.

Irving has heard all that, and the point guard who has already been compared to the likes of Wall and Chris Paul isn’t too concerned about getting wrapped up in it.

“I don’t really pay attention,” Irving says in his soft-spoken yet confident manner. “The question for me is, how are you going to separate yourself from everyone else?”

“Quite nicely” would be the answer so far in Irving’s basketball career. Irving’s pre-college accolades already read like the beginning of a Hall of Fame plaque: McDonald’s All-American, New Jersey state champion, New Jersey Gatorade Player of the Year, gold medal at the FIBA U-18 World Championship. Not bad at all for an 18-year-old, but with every honor, there are even greater expectations.

“If I had to choose a point guard between John Wall and Kyrie Irving, I’d choose Kyrie,” Jay Williams says. “Wall is an unbelievable athlete, but Kyrie is an extension of the coach on the floor, who dictates tempo and isn’t concerned about his own.”

The 6-2, 180-pound PG started to build expectations like those behind his house in West Orange, NJ, playing basketball with the man responsible for much of that success-his father, Drederick.

“He’s kept me focused, and he’s been there since the beginning when no one knew about me,” Irving says. “Aside from being a fan, he’s also my father.”

His father was a great player in his own right, starring for four years at Boston University, where he is a member of the school’s Hall of Fame. His professional career took him to Australia, where Kyrie was born. When Kyrie was just 4 years old, his mother Elizabeth passed away, and it’s been just he and his father since.

After his sophomore year of high school, it became apparent that Irving was something special, and he, along with his father, made the decision to transfer from Montclair (NJ) Kimberley to nearby prep powerhouse St. Patrick, a team with a perennial bull’s-eye on its back.

“It’s the best decision of my life,” Irving says. “I was at the highest level, playing against and beating the best. I developed a toughness and confidence that I didn’t really have before.”

While developing those skills, he was also becoming a Garden State legend. In his first season at St. Patrick, Irving averaged 17 points, 5 rebounds and 5 assists per game while leading his team to a state title.

At the same time, colleges were the ones really starting to target Irving, who had become the consensus top point guard in his class. His quickness and impressive handle were one thing, but the maturity and basketball IQ he showed was enough to have college coaches salivating.

Irving strongly considered Kentucky and Texas A&M, but an instant bond with Coach Mike Krzyzewski was enough for him to announce his commitment to Duke just prior to his senior season. “It felt like home on my official visit and with Coach K,” Irving says. “I’m really close to him. He said that he has a plan set out for me.”

Now the No. 1 freshman point guard in the country was going to a school viewed by many as college basketball’s Public Enemy No. 1. “We are the highlighted game on everyone’s schedule,” Hurley says. “Duke deals with that every year.”

The national spotlight would be on Irving every night to prove his worth, and that was even before people pegged him “the next John Wall.” Even before Duke won the title.

Before he could deal with that, he needed to finish his high school career as a marked man. However, his senior season and state title defense hit an unexpected bump in the road. Although Irving showed he could play with the bull’s-eye on him (his numbers jumped to 24.5 points, 5 rebounds and 6.5 assists per game), his team’s season was cut short due to unsanctioned off-season workouts, and Irving was unable to defend his title.

Although many, including his head coach Kevin Boyle, felt the team was unfairly targeted, Irving was able to do off the court what he has done so many times on it-turn a negative into a positive. “It was heartbreaking because I wanted to win another state championship,” Irving says. “But it all worked out because when I couldn’t play, I actually got to make it down to Duke vs. North Carolina, which was my first Duke game.”

After a summer spent winning the gold medal at the FIBA U-18 World Championship, Irving came to Durham to get ready for a more important first game-the first he will play in. Taking over as point guard for a defending National Champion can be daunting, but Krzyzewski has molded his team’s offense to adapt to Irving’s style of play. It is both a way to make Irving’s transition a smooth one, and a statement on what his coach already thinks of his freshman’s abilities.

Even with that maturity, one of the biggest challenges for Irving might be just getting his own teammates, who already have a chip, to follow him. While Wall may have taken the country by storm last season, it was Irving’s new teammates who cut the nets, and for his biggest goal, Irving needs to look no further than his own starting lineup.

“They already have a title, and I want my own,” Irving says.

And if he does that, those asking if Irving is the next John Wall or Bobby Hurley or Jay Williams might instead be asking, “Who’s the next Kyrie?”