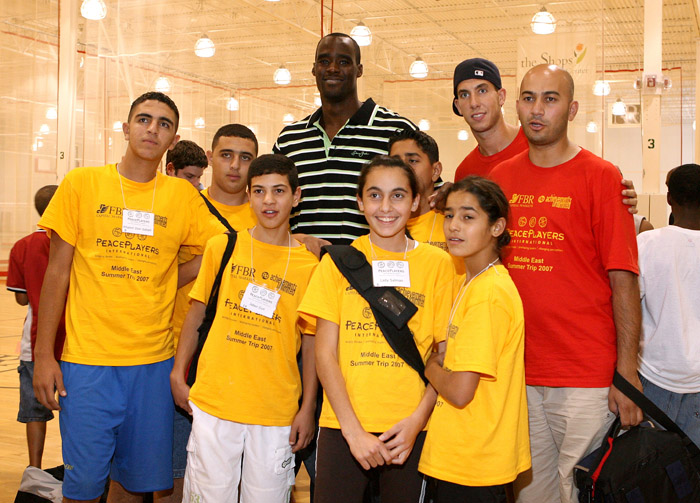 In short, Whitfield’s camp is about developing kids’ minds as much as their game.

“Our goal from day one 23 years ago was to provide our campers with a unique experience by combining fundamental basketball skills, an emphasis on academic achievement and a strong stance against drug abuse,” said Whitfield, a long-time North Carolina resident and Greensboro native (seen below, center).

The experience is certainly unique. At the AU School (age 8 to 13), coaches teach vocabulary in daily workouts. Campers are selected for the AU All-Star Game based on their performance on the court AND their achievement in the vocabulary course. Individuals and teams can win prizes like Jordan backpacks and autographed dictionaries for combining vocabulary achievement with individual and team contest scores.

The five-day experience doesn’t end with the rare combination of ‘books and ball.’ AU employs Alcohol and Drug Services of Greensboro to provide education on the dangers of drugs and drug abuse. The vocabulary course also incorporates terms from the school’s drug-awareness campaign.

But while the school’s focus is on first-rate basketball instruction combined with a heavy emphasis on knowledge, it is undoubtedly the collection of active NBA stars on-hand that provides the greatest attraction for the young ballers.

Howard, who holds a degree in sociology from nearby ACC-powerhouse Wake Forest University, where he studied and starred for four years, addressed the camp on Wednesday about the importance of staying in school.

“I tried to just let them know that they have choices, and they don’t need to take the wrong choice,” Howard said yesterday in a phone interview. “Of course, staying in school, that’s the main thing– but you have to always focus on basketball and conduct.”

It has unfortunately become commonplace, en-vogue perhaps, to doubt and deride the motives of today’s rich, famous, and young NBA star, especially one who is showing up at an off-season camp to speak about academics.

Howard, though, made his reason for being at the AU School abundantly clear.

“It’s for the kids and the community, no question. Me being from Winston-Salem right up the road, these kids know my face…I just want to give back to them and make sure they understand the importance of staying in school and staying focused.”

While Howard is one of the increasingly few number of NBA stars who stayed in college all four years, most players at the AU camp this week, like former the former ACC point-guard greats Paul and Felton, left college after just one or two years.

It seems a bit ironic that “one-and-done” basketball extraordinaires like Paul and Felton would speak to campers about academics, but Whitfield believes that the speakers at his AU School actually carry a more effective message because of their early college exits.

“Everyone of our speakers that have left early have gone back and gotten their degrees. And that’s what really hits home with the kids, that even once they got rich and “made it”, they still went back to get their degree,” Whitfield said. “They believe in the issues we’re about.”

According to Howard, believing in the issue is the main key to conveying the message to the idolizing youngsters.

“I was in that position at that point, and it’s really hard to sit there if (the player) doesn’t want to speak,” Howard said. “So, I try not to be long and get straight to the point.”

In addition to bringing in daily stores of the NBA’s best and brightest players like Howard to school the kids, Whitfield has enlisted a host of major corporate sponsors, including Brand Jordan, Gatorade and Boost Mobile, to provide financial support and rewards.

Also happening in accordance with the AU School is the 6th Annual HoopTee Classic, a celebrity golf-tournament started by Whitfield to raise money for scholarships to the AU school and an endowment fund at Bennett College in Greensboro.

The AU School’s major sponsor, Friedman, Billings, Ramsey Group, Inc, plays an integral role in extending the camp experience to underprivileged children throughout the globe. Through their “Believe to Achieve” campaign, the organization sponsored (in-full) 40 at-risk children and their chaperones from the Washington D.C. area to attend the AU school. In addition to the Washington-area youths, BTA sponsored 20 children and their chaperones from Israel, in co-ordinance with the Peace Players International program.

“Peace Players really falls in line with what we’re trying to teach at this camp: a strong academic base, no substance abuse. Them bringing the kids in (from Israel) is matching up perfectly. They’re having a ball,” Whitfield said.

The Israeli group (some pictured below with Charlotte’s Emeka Okafor) is the same group that received the Arthur Ashe award at this year’s ESPY’s.

With such a rare supply of civic and philanthropic virtue manifested in Greensboro this week–in a basketball gym nonetheless– it’s certainly a fair wonder how the AU School became the shining beacon of summer camps that it is.

“I grew up going to basketball camps,” Whitfield explained. “I played at Campbell, worked there, and coached there 2 years. I always envisioned coming back home and starting a program to bring local Greensboro kids, not only to learn basketball, but to learn the importance of academics and the dangers of drugs.”

Whitfield finally made that vision a reality in 1984 with the inaugural Achievements Unlimited School. But Whitfield recognized after just one day that any great success for his camp, and ultimately the full realization of his vision, would depend on the star-power credibility attached to it.

“We only had 45 kids the first day of orientation. It was just hard for people to believe that those four guys would come,” Whitfield said.

Those four guys were ACC legends Johnny Dawkins, David Henderson, Ralph Sampson, and Michael Jordan, who had all signed-on with Whitfield to help get the camp on its feet.

But the promised gauntlet of ACC immortals, including His Airness himself, did come, much to the surprise and glee of the original 45 campers–attendance doubled the following day, and the camp has been growing, and thriving, ever since.

Whitfield makes no bones about the role celebrities, particularly Jordan’s, have played in the growth of his camp.

“When you bring Michael Jordan in, when the guy otherwise doesn’t even DO camps, and he’s been with us 20 years–things like that help you grow. This really has evolved from being a program for the elite kids, simply because that was all we could afford to bring in. Now it’s such a great cross-section of kids now, very diverse…75% of the campers are underprivileged. It’s been great to find creative ways to touch lives but still open it up to kids who want to play ball.”

So, with the magnificent fruit of his 20-plus years of work and care on full display this week in Greensboro, what is Whitfield the man up to this week?

“Oh, I’m on site every day. 8 to 4, I’m here every minute, helping oversee that these kids get the attention they deserve.”

Thanks, Fred. You’ve already given them so much.