The Big Show: How Ohio St. Really Gets Big 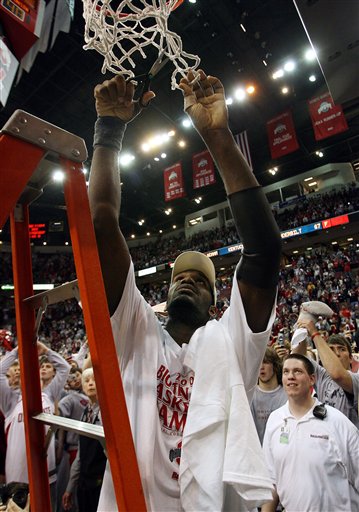 This could have been the start of the show.

Those 19,000 Ohio State fans in the Value City Arena yesterday that had the ‘promise’ card to play to dispute Greg Oden critics would have been able to throw them away. It was supposed to be Oden’s team, now; his conference, his NCAA tournament. Ohio State-Wisconsin — one-versus-two, the game of the year — was the springboard. And the almost violent propulsion of a win was supposed to land Oden back on his throne as the undisputed first pick in this June’s NBA Draft.

Today — the day after — all those ping-pong balls were supposed to mean something. And that mess at the top of the NCAA rankings was supposed to be swept into its corner with Oden holding the broom.

But with 1:19 left in a 47-46 game yesterday, Greg Oden, the tallest man on the floor, finally looked weighed down.

Jason Bohannon backrims a jumper, 6’10” Jason Chappell climbs over Oden for an offensive rebound. Chapell misfires, 6’5″ Alando Tucker gets the offensive board. Tucker misses, Oden scrambles, but 6’2″ Michael Flowers clutches a long rebound. And just when Wisconsin couldn’t physically descend any further, the Badgers call a timeout to draw up an easy Alando Tucker hoop to give Wisconsin a lead with less than a minute left.

And, in the first time Greg Oden saw real pressure, combined with all of that heat already on his 7-foot and growing frame, he started to crack.

Ohio State, though, held itself up. Upperclassmen free of the media burden took quick fouls. Kammron Taylor missed his free throw. Then the other-other freshman — the one not named Oden or Daequan Cook, the one that wasn’t in line to determine the mood of Columbus, Ohio on this day-after — Mike Conley Jr. pulled up and bounced home a floater to give Ohio State a 49-48 lead with four seconds left.

Just then it started to become glaringly apparent that this Ohio State team is exactly that: a team. And as they staved off the last four seconds to take home a much anticipated Big 10 crown, it looked for the first time like this team was not being looked at as Greg Oden’s #1-team in the country, but just the #1 team in the country.

For those in Columbus, by the way, that’s a good thing.

The decade’s past NCAA tournaments have proved that faith in a young team with a lone dominant center and no shooters should be diminished. Chris Kaman, a force at Central Michigan, was bounced in the first round. The last prodigious center, a first round pick himself, Andrew Bogut and his Utah team cruised to the Sweet-16 until they were found out by a much deeper (Rondo-Morris-Hayes-Azubuike) Kentucky team.

And today, in a tournament field where depth, but not necessarily experience in your starting lineup is the formula for success — where the young but top-to-bottom talented UNC, UCLA and Memphis will all command a one or two-seed — this is a step in the right direction for Ohio State.

But that first step, though, should be off of Greg Oden’s shoulders. Because, with this now-proven cast of Buckeyes as the nation’s indisputable best team, a National Championship will not come directly because of Greg Oden. It will certainly not come in spite of him.

But Ohio State could win the National Title with Greg Oden.

Isn’t that how the Greg Oden Show should start, anyway?