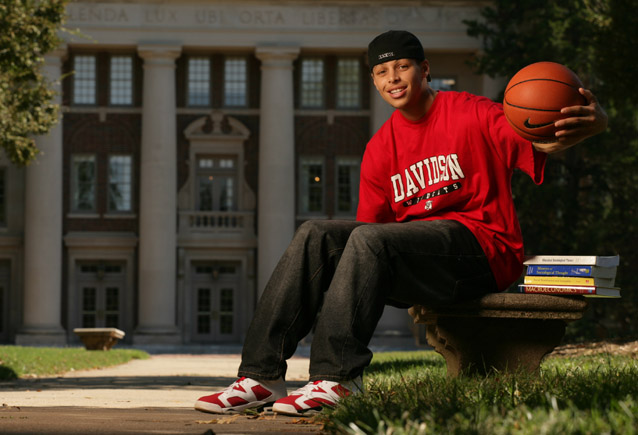 With college basketball season finally tipping off, we’re running a number of previously published print features that documented a current NBA player during his NCAA come-up. Below you can read a Stephen Curry piece—originally from SLAM 125—penned while the combo guard was tearing it up at Davidson, and you can find links to the other articles we’ve ran in this series at the bottom of this page.—Ed.

There’s an eerie cool about Davidson superstar Stephen Curry. Watching the 6-3, 185-pound junior field questions at the Jimmy V Classic postgame press conference, you almost forget he just played a grueling 40 minutes against West Virginia at the great Madison Square Garden. With mini beads of sweat that appear to almost chill within his Caesar’s edge-up, you swear he hasn’t just wowed a Big Apple crowd that included NBA execs Pat Riley, Donnie Walsh and Chris Mullin. It’s because Stephen’s cucumber temperature coats a gluttonous appetite for buckets that he walked into MSG the NCAA’s scoring leader (31.9 ppg at presstime) and maestro of Davidson’s Top-25 ranking.

After only seven games, the Wildcats’ star—built like a Mini Cooper but boasting a V8 game—had already dropped 44 points…twice. Never has the ACC-snubbed North Carolina native received so much national attention. He also owns the absolute prettiest jumper in all of college. Still, all Stephen wants to talk about is his team. “It’s amazing from when I first got here two years ago,” he says. “I remember playing Michigan and there were like 10 people in the stands, to now being in New York, it’s really changed for us.”

What might be even more intriguing than Curry’s cool is his selflessness. He’s faster than any of his teammates to credit his kingly numbers to their contributions. But nothing tops the sacrifice he displayed late in November: With Stephen coming off a 39-point destruction of Florida Atlantic, Loyola (MD) decided to attach two players to him. Three minutes in, Stephen—not the coach—suggested he stand in the corner whenever Davidson had the ball, forcing a four-on-three. The result: Davidson won by 30 and Curry finished with zero points. An awe-inspiring act when you calculate that the sweet shooter might have scored near 40 had he played his usual ball-controlling game.

“I’ve been [coaching] for 35 years” says Davidson coach Bob McKillop. “I’ve had some great players. I’ve never had one that combines greatness in talent and greatness in personhood as Steph Curry. I am so fortunate to be his coach.”

At halftime at MSG, that Curry cool was not as refrigerated. His saccharine shot appeared a bit sour—the 48-percent shooter had just 10 points and was 1-9 from three. Still, in a sign of how far he’s come as a player, Curry had notched eight dimes [one more than his per-game average] to help his team build a seven-point lead. Trust that all the NBA eyes in the house eagle-eyed the likely ’09 Lottery pick to further determine whether the undersized scorer will learn the next level like Deron Williams…or Troy Bell. “I’m coming along [as a point guard] but still making bad decisions—trying to, as coach says, hit the homerun,” says Stephen, referencing his occasionally overzealous passing. “But I think I’m growing more comfortable orchestrating the offense, getting my teammates open. So hopefully towards [season’s] end I’ll be even better.”

Come March, Davidson will bet the house on Curry’s 1-2 skills. That’s when they’ll expect the 30-ppg tourney monster to meet the intended League PG and form a devastating one-man backcourt. After last year’s Southern Conference shutout and Cinderella Elite 8 run, which concluded two points shy of denying Kansas their championship, why wouldn’t the new Gonzaga balance Final Four goals on the bony shoulders of Stephen Curry? With former NBA marksman Dell as a father, it’s in Steph’s genes to feed off stage lighting. Just don’t compare senior to junior. “I’m actually the opposite of my dad,” says Stephen. “He’s a standstill shooter. I got better handles and use quickness to get away.”

One thing li’l Curry knows he doesn’t have over big Curry is wisdom, so Stephen soaks that up whenever, wherever. “Sometimes I look to him during games and he gives me pointers. He’ll see the way the defense is playing me and tell me things I can’t see on the floor.”

With Davidson down four and 1:14 left in their Jimmy V Classic match, Stephen doesn’t look for his father. Despite shooting 2-14 from three, No. 30 calmly sinks his third. West Virginia misses. With 35 seconds left, the ball finds Curry’s hands again. In a heartbeat, he loses his defender with a right-left in-and-out and releases a picture-perfect trey to give Davidson the lead for good. Steph then spins around and runs up court, shaking his head at the frenzied Garden crowd as if to shame anyone who doubted he would have his moment tonight. “He’s got a remarkable sense for the moment,” Coach McKillop says. “He’s never frustrated by adversity. He somehow can transcend it. I don’t know how he does it.”

His coach may be perplexed, but after Curry recapped his 25 and 10 stats and then praised his beloved mid-major for rising to 7-1, the NCAA’s newest rock star gave the pressroom a most elementary explanation of his game-winner. “I’ve been practicing that shot for the last week, so it just worked out.”