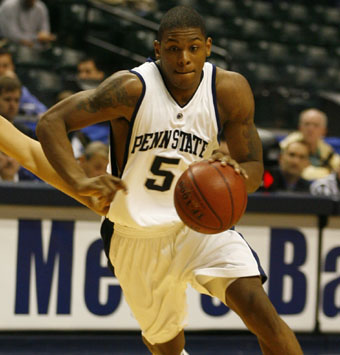 Geary Claxton still can’t figure it out. He looks back on his junior season at Penn State—when the optimism of a 10-4 start was crushed by a 13-game Big Ten losing streak—and explanations elude him. “We’d be right in games, and then things would just… turn,” Claxton says. “I got really frustrated. Everybody did.”

A year later, Claxton and his teammates are trying to avoid another winter of discontent. It’s the last chance for Claxton, a 6-5, 215-pound senior forward for whom “do-everything” seems an insufficient adjective. The team’s leading scorer since he was a freshman, he was averaging 18 points and 9 rebounds per game through late December. He’s also Penn State’s best one-on-one defender and one of the top offensive rebounders in the nation. It’s a skill set that earned Claxton preseason first-team Big Ten honors and a spot on the Naismith Award watch list—proof that hops, hustle and determination can still go a long way.

“I don’t know if there’s anybody I’ve coached who I’ve asked to do so many different things,” says Nittany Lion coach Ed DeChellis. “And Geary can do anything we ask him.”

DeChellis, a Penn State alum who got his start as a Nittany Lion grad assistant in the early ’80s, came back to his alma mater in 2003; Claxton was one of his first recruits. Neither was around for the program’s last NCAA trip, an unexpected Sweet 16 run in ’01. Both hope to be there for the next one. “I want to turn this program around before I leave,” says Claxton. “I think this is gonna be the year for us to do great things. I know I’ve put my work in, and I want to go out with a bang.” —RYAN JONES

This was supposed to run as an In Your Face in SLAM 115, but Ben Osborne decided to hold it because the issue had fewer pages than expected (as often happens with magazines around the end of the year). Then it was supposed to run in SLAM 116, for which I rewrote it slightly to update some stats. And it was pretty much out the door—by which I mean the page was laid out, edited and shipped to the printer—when Geary Claxton blew out his knee in a loss to Wisconsin in mid-January. Shortly after which, Ben pulled the story again, this time for good.

Injury, meet insult. I’ve got a feeling you two will hit it off.

So, you’re reading this here. Why now? Last night, I made the three-minute drive from my house to the Bryce Jordan Center to catch Ohio State. A few weeks ago, when Penn State was 2-0 in the Big Ten, this was the sort of potential home upset people around here who follow basketball were really excited about. Going into last night’s game, Penn State was 2-5 in the Big Ten, and people around here who follow basketball know the home team might not win another game this season. But I went anyway, because OSU’s got some good freshmen I haven’t had a chance to see in person, and because Erin Andrews was gonna be there. Mostly the second thing.

(True story: I was in San Antonio with some family in late December for the Alamo Bowl, and we were in the middle of a really, really good meal at this Mexican restaurant when Andrews, Chris Fowler and Doug Flutie walk in for dinner. I’m trying to explain to my wife and mother who they are, specifically that EA is every college football and basketball fan’s dream girl. And my mom goes, “Her? Really?” I learned two things from this: 1, Unlike most humans, Erin Andrews actually gets better looking on camera, and 2, My mom is probably not a lesbian.)

Anyway. Last night was the first game I showed up for since the Wisconsin game, the same game in which Claxton snapped a ligament, and a game I left at halftime for the first time probably ever. (I’m generally not a leave-at-halftime kind of guy). I came expecting to see a very talented and well-coached OSU squad batter my confidence-deprived team, and that’s mostly what happened. The home team played well, inspired by a really strong student turnout and better-than-usual three-point shooting. It was tied at the half, and Penn State was up four a few minutes into the second half. Then came the grueling and totally predictable drought, a 10-minute scoreless span that dosed the crowd like morphine and killed all hope.

All the while, Claxton watched from his spot at the end of the bench. Jeans and a sweatshirt, left leg stiff and extended as he sat, or dragging behind him when he stood at timeouts to limp to the fringe of the team huddle. We’ve all seen it before, the star player rendered sad-eyed spectator, his overmatched teammates trying to win without him. It rarely turns out well.

As the number above imply, Claxton was/is pretty good at basketball. I’m not sure of the tense I should be using, since he’s not playing a whole lot right now, and since his college career is in fact over. But he apparently plans on trying to make the League after he finishes his rehab. I wouldn’t exactly bet on him, but in a season in which this guy is a potential Rookie of the Year candidate, I also wouldn’t rule it out.

There are a lot of guys like this, I know, impact players on non-impact teams, guys who put up incredible numbers well away from the spotlight. All deserve some attention, and we do our best to shine that light on them when we can. Claxton has the benefit of having gone to the same school as a former SLAM Ed., so he gets the shine today. He also had the bad luck to blow out his knee. Either way, he deserved the ink. He’ll have to settle for the HTML.