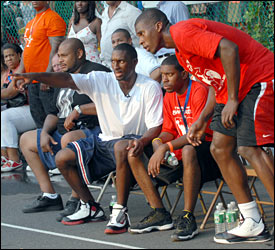 For one weekend every year, everything is all in fun in Mt. Vernon. Not that being a student athlete in the basketball-rich Westchester town isn’t a thrill of a ride, but for Ben Gordon weekend the pressure, the chips, the rankings and the scouting seem to take a back seat to community camaraderie and recreation.

However, it seems that this particular summer the weekend has taken on a more urgent tone. The fun is still there. The stars of the music industry and NBA are still out staking their claims at the bowling alley for Ben Gordon’s bowling event at Homefield bowl in nearby Yonkers -and proving they won’t be ditching their day jobs to topple pins for a living- and we still get a glimpse of Mt. Vernon Basketball’s past, present and future at Family Day/ All-Star Game Saturday. The vibe was upbeat and to someone not in the know, it’s another Ben Gordon Weekend in his hometown. But all in attendance know of the special significance of this year’s festivities. The bowling event featured a $1,000 per lane charge and many of the proceeds from the event and the weekend as a whole are going to the aid of Mt. Vernon’s legendary athletics program, which is currently on life support. As most already know, the district’s $950,000 budget for athletics did not pass in June, leaving the city strapped to raise cash on it’s own to keep the prohgram alive. Where proceeds from this weekend were once supplementary, they have become necessary.

“We’ve raised close to $300,000 thus far, so we are able to have fall sports. But the budget is by season, so we still have to raise another $600,000 for the year, half of which goes to winter sports and half to spring”, said Varsity Asst. Coach Brian Pritchett. The cloud of uncertainty that hangs over Mt. Vernon’s future, however, hasn’t crippled the spirit of the small town, which is even more bonded by its athletics than it’s size. “We’re not thinking about that now”, Pritchett responded when the prospect of other school options for Mt. Vernon student-athletes surfaced. “We’re just trying to raise the money we need. Our deadline for the $300,000 for winter sports is in mid-October, so we’re focused on that.”