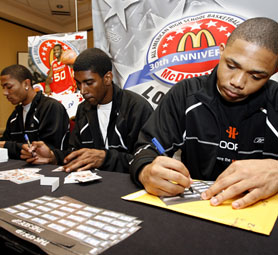 There’s no Greg Oden this year, a clear-cut top dog in the high school class of ’07. The dude with the most potential, for my money, is Notre Dame Prep forward Mike Beasley, a 6-9 blend of power, crazy athleticism and outrageous skills. In terms of production, at least on the prep level, I’d rock with Oregon big man Kevin Love, a behemoth with old-school fundamentals. The strength of the senior class, however, lies in its guards. I live on the East Coast, so I’ve watched point guards like Chris Wright and Corey Fisher and twos like Nolan Smith and Austin Freeman blossom from talented young guns into certified ballers in AAU and high school play over the years. With the McDonald’s All-American Game taking place Wednesday, I wanted to focus on the cream of the crop when it comes to guards this year: Eric Gordon, OJ Mayo and Derrick Rose.

Since I’ve posted about both Mayo and Rose before, I’ll go into a little detail about Gordon. If not for being only a year behind Oden, he may have been one of the most-hyped prospects out of Indiana in recent memory. Fortunately for Hoosiers fans, the Indianapolis native will be suiting up for Kelvin Sampson next season—and probably not much longer than that—after his controversial decision to sign with Indiana after his prior verbal commitment to Illinois. A 6-3, 210-pound scorer supreme, “EJ” is the best pure shooting guard in the nation. Too strong for guards and too explosive for forwards, Gordon gets buckets from anywhere on the floor. He can get your face wet from 25 feet and deeper, lock down his man due to his strength and quickness, blow by opponents with ease and use his tremendous body control to finish with contact and he’s a transition terror with his ridiculous hops. While his handle is solid and he’s more willing to dish the rock than a lot of volume shooters, he can’t be categorized as a combo guard at this point.

In the pros, however, players like Ben Gordon have proved that a potent stroke and crazy athleticism means there’s a spot for an undersized gunner at the 2 on a League roster. Other than not being a true point at his height, Eric’s only perceived weakness is his lack of “upside,” as his game and frame don’t appear to have much room to develop. Still, his physical maturity and shot selection have him looking like a Lottery pick in ’08. And depending on his pro situation, I could see him having a BG-type impact as a rookie.

Sounds like I’m hyping him up? Then you obviously didn’t see him destroy Michael Jordan’s sons on ESPN earlier this year. Gordon completed dominated, Jeffrey, Marcus and their whole Loyola Academy squad (regarded as one of the better high school teams in Illinois) to the tune of 43 points. It looked like he didn’t break a sweat, the vast majority of shots were good looks and to be honest, he could have easily fished for 50-plus and it wouldn’t have looked bad. The Big Ten needs to be very, very shook right now. Besides Bruce Weber and the entire state of Illinois, who are just heated.

As for OJ, what more can be said? I don’t know if there’s ever been a more polarizing high school player. His cocky demeanor, multiple transfers the negative stories about him on and off the court and most importantly, his big-time performances on major stages have made him a prep superstar, starting from his days as a varsity star in seventh grade. But love him or hate him, the kid can ball. Mayo’s possessed a pro-style game since he first hit the scene, which actually might be the biggest issue his detractors have with him. Boasting limitless range, excellent size, good if not spectacular athleticism, court vision and a takeover mentality, somehow critics believe his game has plateaued. Despite losing his stranglehold on the top spot in the ’07 rankings, the 6-5, 210-pound lead guard (he’s more of a Chauncey Billups-type point guard) has absolutely killed in his return to his hometown of Huntington, W. Va., making the squad a top-10 nationally-ranked team. OJ’s got that “it” factor going for him, that star appeal that’ll make him big-time or a bust in the NBA (if you doubt he’ll be a monster in college, you might as well gouge your eyes out like that R&B singer Houston because you can’t see anyway), as evidenced by his 47-point outing in Huntington’s OT loss to Corey Fisher-led St. Patrick’s. The one thing that concerns me: I’ve never seen him play a lick of defense—but then again, there are a lot of pros who are suspect on D. By the way, I’m won’t believe he’ll play for Tim Floyd at USC until I see it with my own eyes.

Unless you count KG’s lone season in the Windy City, no schoolboy ballplayer out of the Chi has been more heralded than Derrick Rose since the late, great Ben Wilson. It’s fitting that, like Wilson, the kid known as “Pooh” also attends Simeon HS and even wears his No. 25 jersey. A 6-4, 200-pound pass-first point guard with incredible bunnies, a jaw-dropping handle and astonishing dimes, the Memphis-bound Rose is the most explosive player in the senior class. He has the skills to get to the bucket whenever he wants and is a great decision-maker in both the halfcourt and transition, due to his creativity, remarkable finishing ability and tremendous court vision. While he could use more consistency on his J, his unselfishness, basketball IQ and lockdown D allow him to make an impact without lighting up the scoreboard. In fact, Rose is one high school superstar who probably needs to attempt to dominate more often. Because when he does, like when he put up 28 points, eight boards and nine dimes in Simeon’s upset of powerhouse Oak Hill, he’s damn near unstoppable. Gordon might have the most League-ready game, Mayo might have the best pro mentality, but Rose, with his size, quickness and athleticism as a true point, could have best NBA career of the trio when it’s all said and done.

Which guard do you think is the best right now, who will have the biggest impact in college and who will be the best pro? Let me know. If you haven’t seen them play, do yourself a favor and check out Wednesday’s McDonald’s game.