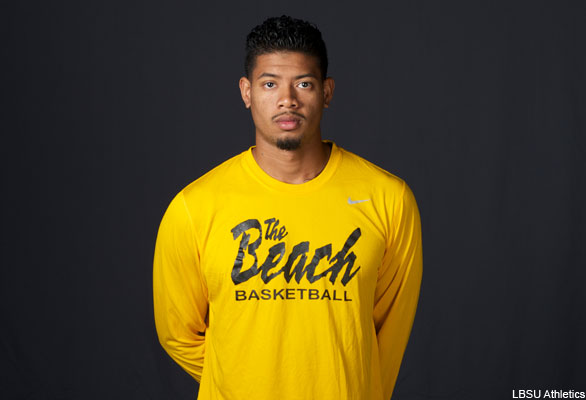 Tyler Lamb woke up on the morning of December 19 with a wonderful twist to the thought that has spurred him on for more than a year. He’d played in just one game since the end of the ’11-12 season, but on this Thursday night, that was going to change.

Long Beach State was scheduled to play USC at 7:30 p.m. Lamb, a junior who’d transferred from UCLA and enrolled at Long Beach State last January, could not be declared eligible until the end of the first semester of the current academic year. Final exams had ended on December 18, and grades would not be posted until hours before tipoff against the Trojans. It was the perfect opening opponent for the former Bruin.

Despite the faint air of uncertainty, Long Beach State coach Dan Monson told Lamb to be ready. That wasn’t a problem. Lamb had spent more time than he cared to remember preparing for this moment.

Coming into UCLA in the fall of 2010, the 6-5 Lamb was a top-50 national recruit. He’d played his final two seasons at Mater Dei (CA) High, a perennial powerhouse, where he’d showcased the well-versed scoring ability of a future combo guard sensation.

UCLA was Lamb’s dream school, but his time in Westwood proved trying. He averaged just 12.2 minutes as a freshman, and considered transferring after the season. But the UCLA team was tight-knit, and Lamb decided to stick it out for another year. In ’11-12 he blossomed, starting 32 of 33 games and posting 9.0 points, 3.6 assists, 2.8 assists and 1.8 steals, while flexing his scoring range (he hit 43 threes).

He flourished during the Bruins’ trip to China in August 2012, and looked primed for an all-conference season in ’12-13. Then, fate came crashing down. Just one month before the opener, Lamb underwent arthroscopic surgery on his left knee. (He’d had a similar operation before his freshman season in college.) UCLA welcomed the nation’s No. 1 recruiting class, which included three perimeter players, two of whom played major minutes immediately.

Lamb tried to come back ahead of schedule, but his knee flared up after just one game, presenting him with a tough choice. He could miss the rest of the season and return with one final year of eligibility at UCLA, or he could transfer to another school for the spring semester and recoup half a season’s worth of eligibility.

Lamb chose the latter, and quickly narrowed his choices to Long Beach State and San Diego State, both of which were close to his home of Ontario, a city in the Inland Empire about 40 miles east of Los Angeles.

Keala King, a good friend of Lamb’s and a fellow top recruit from Mater Dei, had transferred to Long Beach State after his sophomore season at Arizona State, and personally recruited Lamb to join the 49ers.

There was a bit of a problem, though. Monson didn’t have a scholarship available, and he’d grown disillusioned with transfers. “These guys had come in for themselves, not for the program,” Monson said. “It really wasn’t working out with Keala [King] here, so I told [Tyler] and his dad not to come for him. I told my assistants not to call [Lamb], and it was nothing against him, it was a philosophy that the program has to change—we have to take freshmen.”

Two weeks later, Lamb called Monson. He wanted to come to Long Beach, and he’d pay his own way through the end of the ’12-13 academic year. For Monson, it was a win-win. “I said, we’d take the semester and try him out and see,” said Monson. “And he’s come in here and really bought in to what we’re doing.”

King was one of three 49ers dismissed from the team last May, but Lamb remained and kept on working. One of the reasons he chose Long Beach, he says, is because Monson made no promises. Having already gone through the recruiting ringer as a high school blue-chipper, sifting through empty promises, hype and noise, Lamb found Monson’s no-frills approach refreshing.

Lamb’s first months on campus were far from ideal, however. It took three months before he felt he was making any progress with the rehabilitation of his knee. Doubt crept in and set up roots. He feared he might never regain the same explosiveness.

But Lamb had a strong support group through coaches and family. He worked out with James Ennis, a senior on last season’s 49ers team who’d come into the program as a junior college transfer with little fanfare. Through dogged determination, Ennis transformed himself into 2013 the Big West Player of the Year and a second-round pick of the Miami Heat in the NBA Draft last June.

“It just opened my eyes watching [Ennis],” Lamb said. “This was my last chance to do something good, so I worked out with him and got in the gym. He had me working hard. I saw what it takes to get to the next level.”

As the pain and swelling in Lamb’s knee diminished, he began honing his jumper and overall game. Watching games, he realized that the thrilling, up-tempo style Monson has cultivated at Long Beach would require him to be in excellent shape.

He bided his time while the 49ers got off to a woeful start this season. Entering into the game against the Trojans, Long Beach was just 1-9, though in December they’d taken Washington to double-overtime in Seattle and pushed North Carolina State in Raleigh. There was a sense they needed another player to push them over the top…

Enter Lamb against USC. The morning of the game, he felt jitters, mostly attributed to the fact that this was just his second Division I game in 21 months. He thought back to his support group, and reflected on how far he’d come. That kept him steady.

He’d met with Monson and 49ers assistant Eric Brown the day before, and they’d told Lamb that however the situation played out, he needed to be ready. “I put myself in the mindset that I’d play—and win,” Lamb said.

When the first-semester grades were finally posted. Lamb found out he was cleared. True to his word, Monson subbed him into the USC game after the first media timeout. The crowd of 4,410 assembled at the Walter Pyramid Arena signaled their support with a nice ovation. Twelve family members and friends were amongst that thrum, with Lamb having set aside tickets before the contest.

With the fans “rocking,” as Lamb would later describe the scene, he proceeded to set the game ablaze. He scored 18 points in 12 first-half minutes, fitting right into the team’s breakneck pace and helping the 49ers mount a 50-36 halftime lead.

In the second period, Lamb came back down to earth, though he still finished with 20 points on 7-15 shooting and added 4 rebounds, 2 assists and 3 steals. The trend was a microcosm of Long Beach State’s whole performance, which hinted at their potential. “I think in the first half, we showed we can be a very good team,” Monson said. “The second half, we showed we’re not all the way there. We have the capabilities, but there’s still a ways to go.”

While Lamb took the early plaudits, it was fellow 49ers junior Mike Caffey who stole the show in the end. Trailing USC by one point with 20 seconds to go, Caffey turned the corner on a high-ball screen and assessed his options. When Monson had drawn up the play, he’d told Caffey that if the USC post didn’t hedge on the screen, he wanted Caffey to take it to the hole. With no one in his path, Caffey charged toward the hoop and hit the game-winner.

Lamb’s arrival couldn’t come soon enough for Caffey, who had been the focus of aggressive perimeter defense during this season’s early stages. Lamb served as the primary ballhandler as the game wore on, allowing Caffey to move off the ball and focus on scoring. Caffey finished with a game-high 22 points.

Caffey and Lamb have already struck up an impressive chemistry in the backcourt. They’re both from the Inland Empire, and even share a major (Africana Studies) with many of the same classes. “I didn’t know him personally before [Long Beach],” said Caffey, “but now we’re real close off the court. That’s really helped us out. We know what we can do.”

The 49ers felt they deserved to win the USC game, and both Caffey and Lamb said it bolstered the team’s confidence. The next morning, practice was sharper. Players felt energized. The 49ers beat Montana State-Billings just two days later, with Lamb scoring 24 second-half points on the way to a career-high 29.

Lamb will get the chance to partake in the final two games of Long Beach State’s perennially challenging non-conference schedule, road tests at Nevada and Missouri, before Big West play starts up in early January. When Lamb says he’s targeting conference player of the year honors, it may be the surest sign that his confidence is fully returned.

His fitness will continue to filter back—the general consensus remains that it takes two or three games to regain game shape—but his greatest contribution might be opening up the court for his teammates.

Caffey and Lamb have combined for 90 points through two games, and fellow junior guard AJ Spencer had a season-best 19 points against Montana State-Billings. Dan Jennings (11.8 points, 8.3 rebounds), a senior, continues to provide production in the post. “(Lamb) gives us another quality player who wants the ball, who’s aggressive and confident, who’s done it before,” said Monson. “He’s been a player at a high level. He’s been productive. He opens things up for a lot of other guys on the offensive end.” 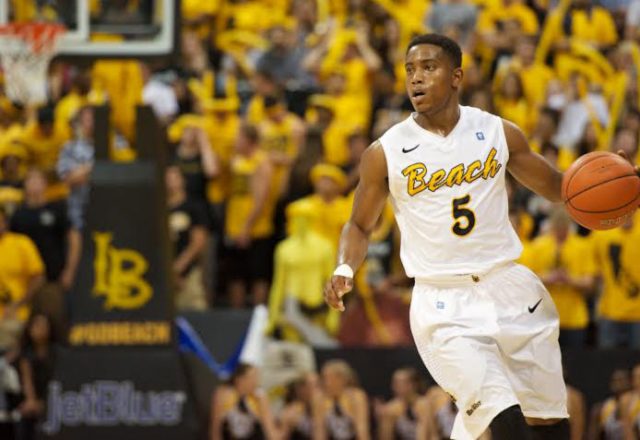 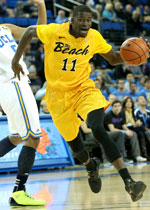 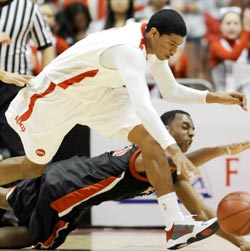 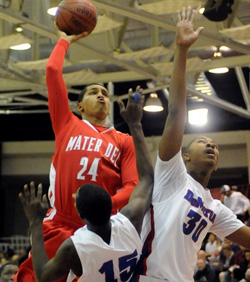