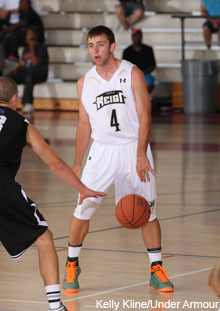 Of all the star-studded teams at the Under Armour Summer Jam in Milwaukee, the Utah Reign was certainly the most unique.

Instead of a roster full of all-conference or all-state players from different high schools spread across different cities and sometimes even different states, the Reign is made up solely of Lone Peak High School’s varsity roster. It’s rare to see club teams that consist of one high school team, but it’s even more unlikely to see them have a high amount of success wherever they travel.

Thanks to a trio of players committed to BYU, and a cast of steady role players, the Reign won five straight games before falling 52-49 to the Houston Defenders in the Elite Eight.

The Defenders backcourt consists of top-five nationally ranked twins, Andrew and Aaron Harrison, as well as a front line of Division I prospects—with the shortest guy being 6-7. Going up against teams such as the Defenders throughout the spring and summer is preparing Lone Peak for a run at three straight state titles, according to the BYU-bound starting backcourt of Nick Emery (6-2, Class of 2013) and TJ Haws (6-3, Class of 2014).

“Utah ball obviously isn’t as good as some of those teams in Milwaukee,” Emery said. “But playing against the bigger talent, and people who can jump higher and score the ball better, you really do find your weaknesses. It’s not easy, but that’s one thing we really work on—is what can we do to get better? Playing against different styles of basketball helps us grow as a team. No one is that tall back here.”

“Those guys are obviously really good,” said Haws, who scored 24 points in Lone Peak’s state title victory and was named 5A tourney MVP. “They’re super physical and that’s something I came away with from that game. That game was so physical. Even when a shot goes up or going to set a screen, everything was so physical and that hit me the game is really physical. They were so big and strong.”

“Our goal as a high school team is to win a state championship,” Haws added. “So, that’s the only reason we do all these trips. I think playing these teams and playing in these atmospheres really does help us a lot. It prepares us to play in state tournament-like games.

“Our first game in the playoffs (at the Summer Jam) we were up 20 and we let it slip a little bit. They came back and we had to fight to finish the game out with them having momentum. They tied the game up but we didn’t press the panic button and finished the game out.”

Both Emery and Haws can play both guard spots, but Emery impressed as a dead-eye shooting lefty while Haws knocked down shots from the perimeter as well as delivering flashy no-look dimes after penetrating into the teeth of the defense over the course of the five-day tournament.

As Haws has gotten older, he’s made a concerted effort to model his game after a slew of NBA point guards.

“Ever since I was little, Chauncey Billups has been my favorite player,” Haws said. “But as I’ve gotten older I’ve kind of started to like watching players like [Rajon] Rondo and Chris Paul. I like crafty point guards and I like watching the little things they do. I try and pick up as much as I can from those two.”

Emery is still deciding on whether he will go on a mission right out of high school, or after a year at BYU, but due to his potent scoring ability and similar size and stature to a former Cougar, fans have started to make some comparisons.

Emery welcomes the notion of being his BYU team’s version of Jimmer Fredette. He’s been working out with his older brother and former BYU standout, Jackson Emery, and also had the chance to work on his game with Jimmer himself.

“I’ve worked out with Jimmer and followed Jimmer a lot,” Emery said. “A lot of things in my game go with his game. I look up to him and all you can do is learn. I love watching other players and learning something, and Jimmer is one player I love watching. You might see a lot of his game in my game, but I want to carve out my own path.”

Emery and Haws have been teammates since they were in fourth and third grade, respectively, and they were joined last year at Lone Peak by an old pal.

Eric Mika, a 6-9 forward, may have been one of Summer Jam’s breakout players and was instrumental in the team’s success all weekend. An imposing presence in the paint, Mika was a terror on the glass and displayed an array of post moves. After playing with Emery and Haws in fifth and sixth grade, Mika didn’t start out at Lone Peak but transferred in before last year.

Mika led the Reign with 19 points in a Sweet 16 victory over the Wisconsin Swing, and was motivated by going up against Indiana-bound big man Luke Fischer, who was also ranked ahead of him by the national scouting services.

Skilled big men are hard enough to come by, but Mika played with a nasty streak that is sometimes even harder to find in post players and looks to be in line for a spike in his national ranking.

“I think about it a little,” Mika said. “When people tell me that I’m playing someone that’s ranked, I try and prove to people that I’m better than higher ranked players. But that’s not my only goal. I’m just trying to contribute what I can and do my job so that we win.

“I still need a lot of work. But obviously posting up is where I’ve been focusing everything on because that’s what I do for Lone Peak. I’ve been working hard on getting a lot of repetitions in the post on different moves, and being able to react to the defender and not just have a planned move every time.”

Lone Peak played at tournaments in Indiana and Boston last summer, Dallas and Philly in the Spring and then came to Milwaukee last weekend to test their skills against some of the country’s best players.

But the road show will continue during their high school season.

“I’m excited not only because I get to play with them one more season, but our season is going to be so fun,” Mika said. “We’re playing in Chicago, Milwaukee, Boston, Orlando and then a tournament here in Utah. So we’re playing some big-time national competition and it’s going to be a lot of fun because we’ve worked so hard and prepared for it.”

Mika was the last to commit to BYU in December. When the Cougars offered, he didn’t take much time to make his decision, as both parents of his are alumni. He also has three older sisters and an older brother who are all currently attending BYU.

It was Emery, though, who opened the floodgates from this Lone Peak squad to Provo after committing at the end of last summer.

“It’s kind of funny because last August when I committed, I went over to TJ’s house,” Emery said. “I was like, Hey man, I’m committing to BYU and want you to come play with me. Me, Teej and Eric are best friends and one thing led to another, and it all led to BYU.”

With his college decision well behind him, club teams from the west began calling on Emery for his services. But the chance to play year round with Haws, Mika, Conner Toolson, Zach Frampton, Talon Shumway (BYU football commit) and the rest of Lone Peak made it a no brainer.

“AAU teams call me a lot and want me to play for them, and think I’ll do well with them,” Emery said. “My thing is always that I’m going to be playing with my high school team the most, so why don’t I play with them during the summer? I’ve played with our starting five for a while together. It’s just a benefit to go to these tournaments because it helps you know how you can play with your guys during the season.”

Emery said he plans on having a decision about when he will do his mission by the end of his senior year, while Mika and Haws both anticipate attending BYU for one season before going on theirs. Since Haws is a year behind Emery and Mika in school, it isn’t quite clear when all three will reunite following this upcoming season.

What is obvious though, is that they aren’t going to get sick of sharing the court together any time soon.

“No, I think all three of us are pretty dang excited to play with each other again,” Haws said with a laugh.