Standing 7-feet tall with a 7-6 wingspan, the UConn sophomore projects to take a giant step forward this season. 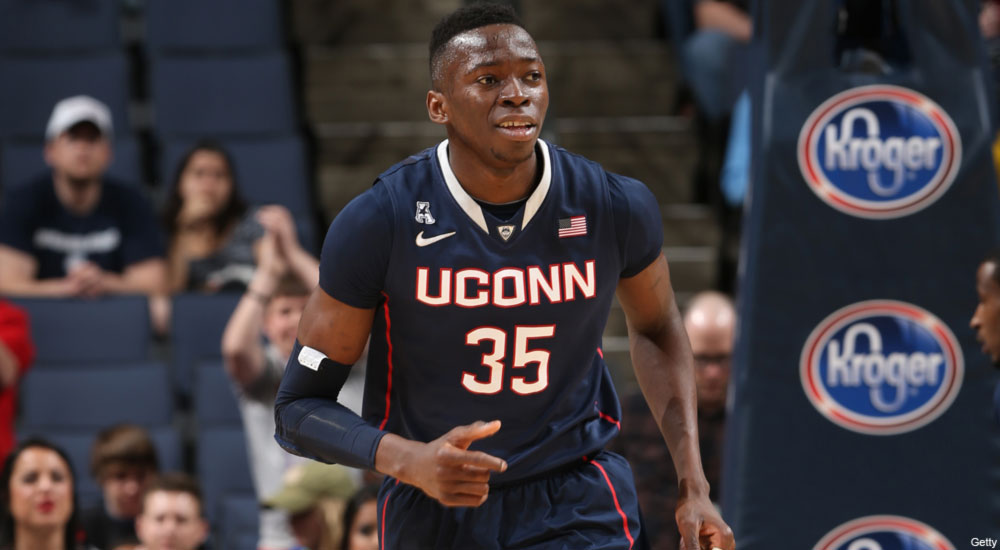 How Did He Get Here? Brimah was born in the African nation of Ghana, where he honed his speed and fancy footwork on the soccer pitch until, at age 17, he immigrated to Miami to play high school basketball. New to the country and late to the AAU scene, Brimah was under-recruited out of high school. He was down to La Salle and Southern Miss before UConn took a flyer on him, and, by all means, was an unheralded player in the Class of 2013.

But UConn’s coaching staff quickly recognized it landed a rare prospect in Brimah, a gangly 7-footer with a 7-6 wingspan and quick feet. Coach Kevin Ollie threw Brimah into the mix right away, in the Huskies’ opener last November vs Maryland. Brimah played only 15 minutes, but he instantly went from never-before-seen big man to potential NBA prospect. I was in attendance for the game, and I remember thinking to myself, Wow, why is nobody talking about this Brimah kid? Dude is 7-feet tall, blocks everything that crosses his path, and runs the floor like a guard. I thought I knew about every worthwhile recruit in the Class of 2013. Obviously I was wrong.

In that first game—and throughout his freshman year—Brimah was playing exclusively off natural instinct, without a hint of basketball know-how. At times it was ugly. He was beyond frail (220 pounds at 7-feet tall!), constantly getting pushed off his spots and clearly learning the game on the fly. But Brimah was also uniquely athletic and mobile for a 7-footer, and his long-term potential was apparent.

Now a sophomore, Brimah is still raw in terms of skill set. But he’s expected to take a big step forward this season, both on the court and in the locker room, as evidenced by him being named co-captain despite his youth. Brimah’s primary responsibility will be to anchor the Husky defense, something he did effectively last season, at least when he could stay on the court. In 16 minutes per game, Brimah recorded 2.3 blocks but also committed 3 fouls. He demonstrated terrific instincts but also a lack of patience. It’s imperative that Brimah adopt a Roy Hibbert-like approach of staying vertical defensively, contesting shots but not always trying to block them.

Brimah is an overall plus defender—one of the best rim protectors in the country, actually—but there’s always room for improvement.

Brimah’s offensive development, on the other hand, will be the determining factor in his long-term future. While Brimah was a reliable finisher last season—he converted 70 percent of his attempts around the basket, per Synergy Sports—on film it’s clear that his close-range buckets almost exclusively came off alley-oops and drop-off passes. In fact, 27 percent of his offense came off cuts and 27 percent came off put-backs, while isolation plays made up less than five percent.

Brimah played off instinct, and he just wasn’t equipped to make moves offensively. That was passable last season, because he played alongside the best backcourt in America. But for this year’s UConn team, Brimah needs to be at least ostensibly functional on offense.

If he can incorporate even a singe post move this season—say, a simple hook shot over his right shoulder—Brimah could end up as the best center in the American Conference due to a rare combination of 7-foot size, fluid mobility and defensive instincts. He’ll be a reliable finisher around the basket, and an absolute beast defensively. At the least, he’ll be fun to watch. At his best, Brimah could assume a “Hasheem Thabeet” type of role in Storrs, and have a decision to make come May.

• Speed and Mobility at 7-feet Tall

Brimah flies up and down the floor, routinely getting ahead of the defense for easy transition buckets. There is no questioning his effort.

Twenty-seven percent of Brimah’s offense last season came in “cutting” situations, more frequently than any other aspect of his game. He finished an excellent 73 percent of his cuts. This statistic bodes well for his NBA prospects, as he dives hard to the rim on the receiving end of pick-and-rolls.

— Drop Offs Under the Basket

Brimah corrals rebounds in and out of his area using his height and athleticism to track down loose balls. He must get stronger, however, as he often gets pushed off his spots and tries to compensate by out-jumping opponents. Everyone can jump at the NBA level, and, really, in college as well.

Brimah was devoid of any offensive skill last season. When he received the ball in the low post, he would just fling the ball in the air, almost like he panicked. He needs to improve all aspects of his post game—establishing position, catching the ball, and making a move. The hope is that Brimah will be more comfortable operating in the post this season.

Brimah did flash some potential in his post-up arsenal last season. In a very small sample, he shot 10-22 (45 percent) on posts up, per Synergy. But an effective back-to-the-basket move was few and far between.

Brimah must get stronger to hold his ground in the paint. You can’t be 7-feet tall and only 220-pounds.

Gambles for Blocks, Instead of Holding His Ground and Staying Vertical

As mentioned, Brimah must learn how to stay vertical, contesting shots but not thirsting for blocks.