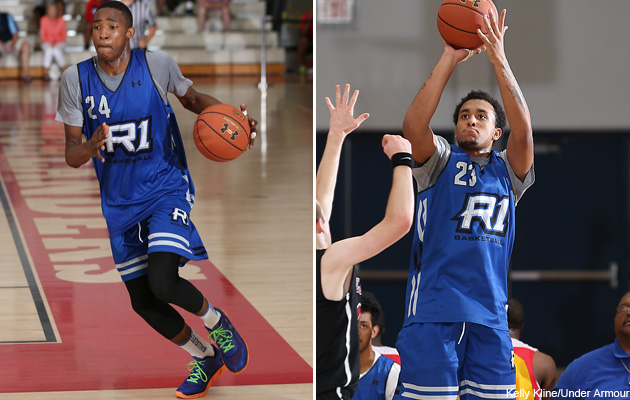 Impressive showings at the NBPA Top 100 camp, and other events earlier in the spring and summer led Arch Bishop Carroll (PA) Class of 2015’s Derrick Jones rise to five-star status by the ranking services.

He holds offers from Kentucky, Kansas, Syracuse, Villanova and Maryland to name a few, and the 6-7 lefty is starting to compile an entertaining Ballislife highlight video thanks to his athletic drives to the cup and high-flying tip-dunks.

Jones (pictured, left) was one of several players with similar resumes in attendance at the Under Armour Summer Jam presented NY2LA Sports July 17-21 in suburban Milwaukee, WI—but all that added up to was an opening night loss and an admitted underwhelming performance.

“That loss showed us any team can beat us at any time if we’re slacking or come out lazy,” said Jones, who runs with We R 1 based out of Philadelphia. “After that we came out playing with our hearts on the line. We kept winning.”

Following a loss to a talented Utah Prospects team, Jones began to turn it on and so did We R 1 all the way through their championship victory over the DC Assault. Jones still has a developing perimeter game as he continues to tighten his handle and gain more consistency on his outside shot.

But his prototypical size and athleticism as a 2-guard or a 3 is what caught college coaches’ attention over the last couple years, and what has subsequently led the gurus to rank him among the top-25 players in the Class of 2015.

As college powerhouses continue to court him for his services, his focus is on his own game so he can remain among the cream of the crop.

“I haven’t thought about school because it’s so early in the process—I still have two years to think about it,” Jones said. “It’s great and an honor to be one of the top players in the class. But that means I have to keep going out and playing hard, and keep working. I’m trying to get better and better every day. I like playing the 2 or 3, just being on the wing so I can break my man down and get to the basket.”

We R 1’s success at the Summer Jam wasn’t all Jones by any means. Burly 6-5 wing Tyler Kohl (Trenton Catholic) was consistent from three-point land throughout the playoffs, and bullied smaller defenders by taking them right to the hoop if they tried to run him off the three-point line.

Kohl’s biggest offers were from St. Joseph’s and Rhode Island prior to the Summer Jam, but Minnesota offered on Saturday as Kohl (pictured, right) was We R 1’s steadiest player. Kohl was happy to get a chance to prove himself at the tournament that saw over 1,000 different coaches come through the doors at Homestead High School in Mequon, WI.

“I like playing on the wing,” Kohl said. “But if I have a mismatch, I’ll go down low and destroy people. This was good because I didn’t to play in this tournament last year because I had some things I had to take care of. It was a good tournament. We came in with a big target on our backs because we’ve already won two tournaments. We wanted to prove to everybody we were the best team here.”