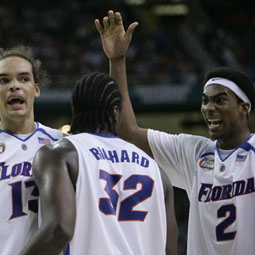 Neither semifinal game offered much in the way of excitement. Ohio State was just too deep for Georgetown and kept bringing guys off the bench who could play. The Buckeyes really should have blown them out, but give JT3 credit for designing a defensive game plan that kept the game within reach. At least now Roy Hibbert can get a shape-up. The Hoyas were hurt by Jeff Green’s absence. Yeah he was in the game but he was nonexistent, playing this Final Four game like it was the first game of the season. I mean that’s how you play your last collegiate game? That’s your last audition? Pretty sure he’s going pro but he might have lost a shot at the lottery with that BS game. He only scored 9 points and without him it was no contest. His draft stock certainly dropped, didn’t it? I mean that was one game but what a game to flake out on. Yeah, the Buckeyes weakside defense was good, but not THAT good. Green took himself out of the game. Who feels good about using a high pick on him? Not me.

The real question that occurred to me while watching that game was if Mike Conley Jr. declared for the draft after the season, how high could he go? 7? 5? No joke, dude can play. He’s a top 10 pick right now. If Oden goes, I can’t see Conley coming back. And yeah, Oden has to leave, right? Even if I can’t recall watching a dude who is worse at drawing fouls. I mean its like he’s doing it on purpose. The trendy thing to say is that now he’s not ready. He’s not on Tim Duncan’s level so he should wait another year. To that I say, of course he’s probably not as ready as we want him to be but he’s still very much worth a number 1 pick. He’s young and in many ways untested. In the L he’ll get eaten up by the Dwight Howards of the world, but give him time and he’ll be a factor. Dude got ability but he’s 19 or something. Just because he looks like Father Time doesn’t mean he ready. Give him time.

The other game was much worse of course. I’m not saying the refs should look the other way when there is a foul but for sake of the game, have some discretion. The third foul on Afflalo was barely worth it and as soon as he sat I knew it was over. As it was, UCLA was gonna have a hard time with the Gators but now you take their best player away? Great. Now we have to sit through an entire half of watching the crowd do that gator bite thing. Which, I used to think was cool but is now greatly annoying. The Gators are good though and they’ll probably win tonight because Oden will get in early foul trouble and they go inside to Horford and pass out to all those perimeter guys and find a way to win. They’re an interesting team aren’t they?

First off, Noah is a funny looking dude. He makes Mike Bibby look like Djimon Hounsou. And Taurean Green has that discoloration thing going on in his face; I mean that’s motivation. He was probably like I’m never gonna get laid looking like this, I better make the basketball team then it won’t matter. More power to you Taurean, that’s what I say. Then there’s the confederate-like named sharpshooter Lee Humphrey. Damn he can shoot but I just can’t get by his name. Wasn’t there a Lee Humphrey who worked under Jefferson Davis? Horford is the man though, easily the guy with the most upside. He’s a top 5 pick no doubt. I was also amused by the constant news that Fla coach Billy Donovan was being mentioned for the Kentucky job. Why would he want to take that? Kentucky is one of those programs that lives in the past. Much like Alabama and Notre Dame in football nobody cares about Kentucky except for the people who live in the state.

So here’s my prediction for tonight: Florida 77, Gator Bait 71.