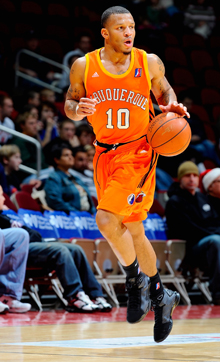 After going undrafted in the ’05 NBA Draft, Will Conroy was left looking for a place to play. It might not have seemed like much at first, but the NBA D-League had a spot for the former University of Washington point man and the Huskies’ all-time assist leader. He’s now the little League’s leading scorer and a quick first step away from a full-time position in the NBA.

After playing four seasons in the Down-Low, Conroy has matured into a lethal offensive weapon. In 2007, he earned two NBA call-ups, one from the Clippers and a second from the Grizzlies. Since then, he’s been in consideration for spots with the likes of the Cavs, Bobcats and Lakers. While he hasn’t been able to stick yet, his official stints have been a big part of Conroy’s solid work experience.

“This is the fastest route to the NBA for guys who don’t get drafted,” says Conroy, whose college teammates included first-round picks Brandon Roy and Nate Robinson. “There is a guy or two on every team down here that could be a full-time player in the League.”

Now, Conroy is working toward another shot in the show. His  stats for this season in Albuquerque speak volumes about the maturation of his game—26.4 points, eight assists, 4.3 rebounds and 2.1 steals per night. He’s had eight 30-point games, ranks fourth in assists and recently made his second D-League All-Star Game appearance in Phoenix. Doesn’t seem like such a bad job after all.

Trey Johnson—Now in his second season in the D, Johnson has found himself dominating opponents every time he steps on the court. With season averages of 20.1 points per game, just under 5 assists and over 3 boards, the 6-6, 216-pound Johnson is more than ready for an NBA call-up.

Blake Ahearn—The Spurs made this 6-2, 190-pound scorer the first call-up of the ’08-09 NBA season. Now playing for the Dakota Wizards, he is averaging 24 ppg and 6 apg and had a great ASW by winning the D’s Three-Point Shootout and co-MVP of the All-Star Game.

Eddie Gill—For a man who has been in the A on and off for years, the news that the Bucks called him up February 10th shouldn’t have been shocking. The 6-0 guard, who was averaging nearly a double-double in the D-League (16.2 PPG, 8.6 APG), carries the hopes of his hometown Colorado 14ers on his back, as well as every
other D-Leaguer.