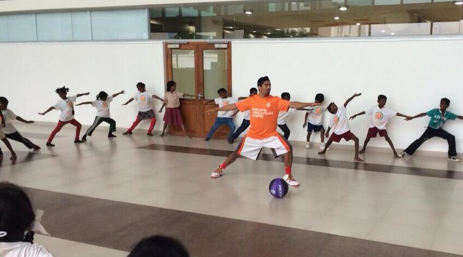 Back in 2013, former NBA commissioner David Stern discussed the state of basketball in India:

“To be specific, we can look at an Indian in the NBA in five years. If we get our grassroots programs bigger and kids across this country start bouncing the ball rather than kicking it or hitting it with a strange paddle, there will be an enormous influx of very good and talented athletes into our game.”

One of those grassroots programs that is helping India’s youth bounce the ball is Crossover Basketball. Founded by Shaun Jayachandran in 2012, Crossover has held a free two-week summer program for youth aged 8-14 in Chennai, which is located in the southern part of the country. Crossover is not just focused on creating better Indian basketball players, but wants to use the sport to inspire Indian youth. From its website:

The main objective of Crossover Basketball is to use basketball as a vehicle of change in communities in India by combining the ideas of academics and sport – imparting the values of leadership, character, teamwork, and communication with the goal of inspiring and preparing those students to continue in their educational pursuits through the university level.

Jayachandran, who has a background in teaching and coaching basketball, founded Crossover because the problems surrounding poverty and education in India really touch home for him. With family hailing from the Chennai area, Jayachandran has seen firsthand the level of depravity that exists in certain corners of the country and knows that education and confidence will help Indian youth get out of a seeming never-ending cycle. “In the entire world, one in five children are actually in India. With that large of a number, many of the children end up becoming part of the poor and marginalized which leads to them often being left behind. In India, graduation rates hover around 10 percent! Using basketball as a vehicle of change, Crossover participants learn leadership, communication, teamwork and character skills which give them the necessary tools to become future leaders.”

The program has grown by leaps and bounds since its inception in 2012 when it served 45 underprivileged youth. This summer over 400 youth participated in the program. As the program’s numbers have grown so have their staff, which includes college basketball players, high school and college coaches and even several high school basketball players. Of note is that all of Crossover’s staff are volunteers, as their belief in the organization’s mission is what drives them to support the program. Maryland guard Varun Ram explained to SLAM in an email exchange why he decided to volunteer this summer: “Crossover was a great opportunity to give back to a community in need using the basketball and leadership skills that I have acquired growing up around the game. As a first generation Indian American, the opportunity to give back to the community in which my parents were brought up added extra incentive.”

Basketball is truly used as a vehicle of change at Crossover, as the program itself resembles a normal basketball camp:

The main difference between Crossover and a typical basketball camp is that Crossover includes classroom sessions that focus on leadership. “Our leadership/academic program centers around Crossover’s Four Pillars of Success—leadership, character, teamwork, and communication—and the introduction of Coach John Wooden’s Pyramid of Success,” Jayachandran says. “Each student goes through four rotations per day with one exclusively in a classroom setting that allows our faculty to connect with students about each pillar and the building blocks in the Pyramid of Success.”

What makes all of the work Crossover has been doing so remarkable is that Jayachandran has managed to run a successful program despite not having any major donors. Getting a generous donation of free gym space from the American International School of Chennai has helped immensely but he admits that, “The biggest obstacle has been in connecting donors passionate about Crossover’s mission. Funding a startup non-profit has required us to be extremely lean which takes away from time being spent furthering the impact of the program.”

Harvard forward Jonah Travis—a two-time volunteer—explained in an email exchange with SLAM, “The enthusiasm and the appreciation of the children is what kept me coming back. Being able to see that there are kids out there that appreciate what you are doing for them so much that they would do just about anything to be a part of the program, it makes you reexamine your everyday approach to life.”

Maggie Brown, a forward at Trinity College in Hartford, CT, echoed similar thoughts in an email, saying, “We saw kids laughing and screaming their heads off, simply because they had made a layup after days of trying. We saw kids who smiled in amazement as they entered camp, simply because there was a clean water cooler and bathroom awaiting their arrival. Crossover made all of this possible, simply by using basketball to create change.”

With all of the impact Crossover has already accomplished, Jayachandran is focused on keeping the program strong. “Next summer we plan to implement a joint internship program between Teach For India, Crossover, and Harvard University where students will spend time observing a classroom for a few weeks, working with Crossover, and then returning to the same classroom to observe and further develop impact,” he says. “Also, we intend to not grow our student population from this year, but to enhance the training and learning of our faculty in order to allow them to further their impact.”

With the popularity of basketball in India at an all-time high, Crossover is not only teaching the sport to youth, but also creating hope and change through it. “The game of basketball is about so much more than just winning or losing,” Ram says. ”It is about the life-changing impact that the game can have on a person or community.” For more information on Crossover, visit its website. 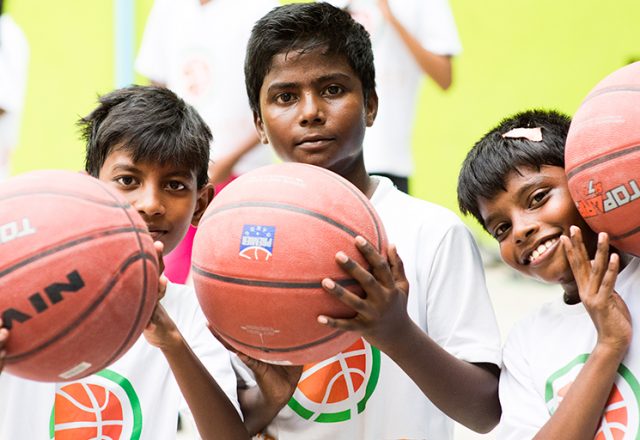