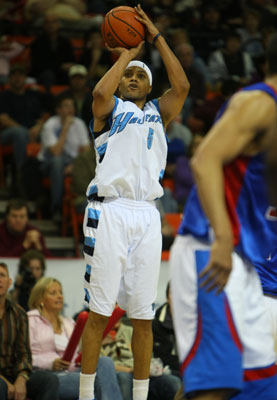 It’s a rainy winter night in Halifax, Nova Scotia. The coastal town moves slowly as headlights cut through heavy fog. In the downtown core, cars search for a parking spot outside the Metro Centre, the shared home of the Halifax Rainmen, a National Basketball League of Canada franchise, and the Mooseheads, the local semi-professional ice hockey team.

Inside the arena, Desmond Ferguson lifts his 6-7, 225-pound frame from the bench. To his teammates, his friends and the fans he is known as Moneyball. It’s a nickname based on his ability to knock down three pointers—the moneyball.

The name was born in his AAU days, when he played alongside Kevin Garnett. Every time Ferguson hoisted a shot from long distance Garnett would scream out the name, indicating to everyone else what he already knew, Ferguson wasn’t going to miss.

Garnett went on to become an NBA champion, a league MVP and a 14-time All-Star. Ferguson is about to check in for the 18th team he has played for in a career that has spanned 10 years and 13 countries.

He moves confidently, but slowly. His body can’t hide the mileage it’s endured. At 33, Moneyball is the oldest man on the court. He’s also the only one with NBA experience.

His team is down 12 points to the visiting Lawton Fort Sill Cavalry. As he steps on to the court, he rubs his hands together. A neon blue number five glows from the back of his ivory uniform. It represents the month his mother, Patricia, was born. “The rock of my life,” he calls her.

He’s been in this situation before. Down and out. The odds against him. Success followed closely by failure.

“If you can’t control it, you can’t be mad about it,” he says. It’s a personal mantra forged from a life of constant instability. Basketball has always been his refuge.

Across the court the opposing coach, Michael Ray Richardson, paces up and down the sideline. Dressed in black slacks, a black turtleneck, and a brown and black pin striped jacket, he barks orders at his team.

His starting center, DeAndre Thomas, has just thrown the ball out of bounds. His team has a comfortable lead over the Rainmen, but Richardson isn’t letting up. He stops pacing and crouches beside the court.

In 1978 Richardson was drafted fourth overall by the New York Knicks. Billed as the next Walt Frazier, he was a tremendous talent with all the physical gifts to be an iconic player. Eight years later he found himself banned from the League for life. Cocaine had ended his career.

Ferguson fell in love with the game while growing up in Lansing, MI. Raised by a single mother with a younger brother in tow, he was forced to become the man of the house. His escape from circumstance was also his second home, Georgetown Park.

The outdoor court, a graying slab of concrete surrounded by oak trees, allowed him to be a kid again. A child amongst men. His competition was stronger, faster and better. Their abilities amplified his weaknesses, fueling his motivation to improve himself, as a player and a person.

He saw the older men lining the sides of the court. When they stepped off the asphalt the basketball was swapped for the bottle, the exchange of high fives was replaced by the exchange of drugs. It’s a world he chose to avoid; instead focusing on his idol, Earvin Johnson.

Earvin became Magic when he recorded a triple double of 36 points, 18 rebounds and 16 assists in a single game for Everett High School. The same high school Ferguson would eventually attend.

“Magic was someone that gave me hope,” says Ferguson. “With him you could see the dream, you could touch it.”

By the time his final year of high school had rolled around, Ferguson had made a name for himself. He’d grown to 6-5 and his body had begun to fill out. He was not just a man, he was the man.

“I was caught up in the hype,” he says. “I knew when it came time to choose a school, I wanted the attention, I wanted people watching. I wasn’t thinking about anything else, I was just living in the moment.”

In the first game of his final season, he was informed recruiting agents from University of Minnesota, among others, were in the stands. He knew this was a real chance, a tangible opportunity to secure his future.

In the dying seconds of the game, with his Viking squad down three points, the ball—his future—was in his hands.

His right hand palmed the leather of the ball as his eyes watched the clock. Five seconds.

He’s practiced this moment over and over. He’d lived it in all those nights spent in Georgetown Park, watching the sky fade to black. It was these nights that the surrounding homes would fall asleep to the sound of the ball bouncing off the asphalt as he shot, and shot, and shot.

He glanced at his defender, then up at the rim. With one push, he threw his body to the left and then just as quickly, snapped it back to the right. The crossover shook his defender and gave him just enough space to see the orange glimmer of the rim. It was all he needed to see. As the ball floated from his fingertips, the crowd watched with frozen expressions.

Ferguson scored 38 points that evening and his Viking squad walked out of gym with the air of victory swelling in their chests. He had put on the performance he needed, but the talent scouts from Minnesota never saw it. As snow poured down from the sky, their plane had stayed grounded.

The following week the University of Missouri flew Ferguson down to their campus. On the return fight, he signed his letter of intent.

“Missouri didn’t turn out to be anything like I imagined,” he says softly.

He reflects on those days in a dimly lit bar in downtown Halifax. His drink of choice is a glass of ice water.

“I had high expectations for myself and for the program, but I never felt like I was given the opportunity to reach those standards,” he says, disappointment evident in his voice.

He stops speaking and stares up at the NBA game buzzing in front of him. The glow of a television screen reflects off his glass, a smile creases the corner of his cheeks.

“Going back to Detroit was one of the best decisions I ever made.”

After one season at Missouri, Ferguson returned home. At the University of Detroit Mercy, he rediscovered what made him fall in love with the game, what had been lost in the notoriety and hype of playing for a Division I school.

“At Detroit, I could just have fun again,” he says. “I could let myself enjoy the game.”

His roommate was also one of his closest friends, a fellow teammate and future NBA talent, Jermaine Jackson.

“I actually begged him to transfer from Missouri to come and play with me,” recalls Jackson. “When we got him I knew we had one of the best shooters in the country…his defense was bad as hell though.”

Jackson remembers Ferguson as the quiet guy on campus and laughs when doing so. “He’d walk around with his big ‘fro, always matching his clothes together. He was a neat freak, always getting mad at me for not keeping the room clean, I used to make him mad just because,” he says.

“He slept all the damn time anyways.”