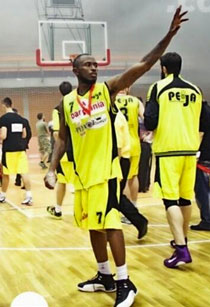 Last time SLAM checked in with Harouna Mutombo a little less than a year ago, he was preparing for the NBA Draft. His college career behind him, Harouna was all set to step out of Uncle Dikembe’s 7-2 shadow and ready to make a name for himself in the basketball world. That journey has since taken more than a couple left turns, but for his resolve, the first chapter in the tale of Harouna Mutombo won’t do him justice unless it begins with his tenacity.

A pulled hamstring kept him from participating in the 2012 summer league, but Harouna returned from injury in time to be selected by the Santa Cruz Warriors, D-League affiliate team of the Golden State Warriors. Mutombo spent training camp in Santa Cruz, but was eventually cut from the team in December.

“Santa Cruz was in a tough situation because while they liked me as a player, I was fighting for a roster spot against guys like Travis Leslie and Dominique Johnson. I was pretty much the only non-rookie there, so I understood. The experience was still a positive one,” Mutombo says.

Taking the setback in stride, Harouna waited for his next opportunity to arise. A month passed, during which time a potential spot on the Sioux Falls Sky Force, the D-League affiliate of the Miami Heat, Minnesota Timberwolves and Orlando Magic, never materialized because a player on the team that was supposed to be called up to the NBA never was. And so there was no room for Harouna Mutombo there, either.

At that point in early January, Mutombo had a difficult decision to make: Whether to remain stateside and train, hoping opportunity would eventually come knocking, or take control and find opportunity wherever it may currently be. Following the advice of his support group, his agent, and even other professional organizations, Mutombo chose the latter and found an opportunity to play for KB Peja in Peja, Serbia. His intentions were simple: log significant minutes continue to gain pro-level experience, and work out the weaknesses in his game.

“The primary motivation in my decision [to go overseas] was gaining experience. It was extremely important to my agent, me as well. He really wanted me to get a good feel for the game at the pro level. The main thing for me was to be playing. I’d been working out since May (post-injury), and moving into 2013, playing time was the most important thing, and so over seas teams became a much more viable option,” Harouna explains.

For those born and bred in North America (which does geographically include Canada, before the comment thread goes elementary school social studies teacher on us), moving across any major ocean can be a jarring transition. The best way to avoid the culture shock and feeling of loneliness that accompany such a change is to stay focused on goal, and Harouna’s basketball-tinted sunglasses did wonders on the foreign glare. The most difficult transition Mutombo had to contend with did not involve his diet, the difference in culture, or even the language barrier; it was centered around his growth as a basketball player.

“Getting used to life in Peja was the easy part. This town is a lot like an American college oriented city, so I adjusted fairly well,” says Mutombo. “Being one of the two American imports here, its almost like the entire city is watching you. The main thing I had to learn was how to not take things so personally. Losing a game, having a bad game, you can’t take it out of the locker room with you. It’s part of basketball. Minding my game, and coming in and working hard, that’s what I have to focus on.”

On the court, Harouna faced the same challenge—growth—but it wore a different mask. During his time at West Carolina University, Harouna was, for his size, asked to play a lot of minutes at the power forward position. His doing so allowed WCU to play with four guards on the floor, and caused the mismatches that allowed Mutombo to excel from the 4 position. He did it for so long, so well, that one could easily forget that his natural position is shooting guard.

“When people ask what position I played in college, my coach would tell them that I’m a basketball player. In college I had to do a lot of things for my team. We didn’t have a lot of size and rebounding, so at 6-5, I was able to squeeze in at power forward, which allowed us to play with the best of the opposition offensively,” Harouna says.

In Serbia, Harouna has been able to return to his natural guard position, not at shooter, but point. Playing the point guard position challenged him greatly at first, but also taught Harouna several valuable lessons about the game of basketball. But, same as anything else worth the time, his point game certainly did not come without effort.

“[Playing point guard] has been great. I’ve always been able to pass the ball, so it’s been all about keeping my handles tight, keeping good footwork. That first month and a half I was here, it was pretty tough. I didn’t know what I was doing, by that I mean I was always in between. I didn’t know when I was scoring too much, when I was passing too much. I was being too passive, then being too aggressive. That was messing my game up a bit for the first month,” Harouna explains.

Getting acclimated to the point guard position was a process, but as the season progressed, Harouna found confidence in countless hours of work put toward his craft, and the endearing support of his teammates.

“Talking to the veteran guys, including one of the premiere PGs in the country, has been great. Their trust gave me this confidence. They would tell me, ‘You know you can pass, you know you can score. When you run plays, read what the defense gives you.’’’ Harouna says.

Fast forward to today, where Harouna Mutombo is putting the finishing touches on a solid rookie season. Mutombo put up modest averages while backing up Samir Shaptakovic at point guard: 7.5 ppg, 4.8 apg and 4 rpg in 16.1 minutes per game. But his team is 26-4, and their playoffs begin on May 4.

“Last year, I wasn’t a complete player. I was a shooter before everything, and even that was somewhat inconsistent. Coming here, I’ve learned how to be prepared for a shot quicker. Learning what’s a good shot, what’s a bad shot, when to shoot and when not to shoot; all those kind of things affect your performance. I’m smarter now, and a better player for it,” says Harouna. “Also, playing point guard, I can push the ball now. I’m more comfortable getting into and performing well in transition.” Mutombo explains.

His time in Peja has been a successful venture so far, as Harouna has been able to do everything he set out to accomplish. The significant amount of minutes he’s played this season has afforded him the pro level experience that he sought, and his time playing point guard has, in his estimation, made him a better overall guard and basketball player. His focus is now on his team’s playoffs, but Harouna has not forsaken the forest for the sake of the tree. His big picture focus remains intact, and he is looking forward to displaying his skill for NBA teams when his season comes to a close.

There will be a transition in returning to playing ball in the United States as opposed to Euro ball. In Serbia, Harouna hasn’t been able to play his naturally aggressive defense they way he would stateside, but he is not overly concerned.

“Defense has always kind of been my thing. I guess you can say it runs in the family a little bit. I’ve had to learn how to use my feet, use my length [here in Serbia]. Going back to the USA, I can take my improved footwork and hands, and incorporate it into my naturally aggressive defense. Of course the players in the USA are quicker, but each team over here has two Americans, and I’m assigned them often, so I like ill be alright when I come back.” Mutombo says.

The journey of Harouna Mutombo will run through the Summer League, that we know for a fact. Where it goes from there, whether a team takes him into NBA training camp, he winds up back in the D-League, or even back in Europe remains to be seen. But one thing is for sure, SLAM will be paying attention, and will bring you the next chapter.