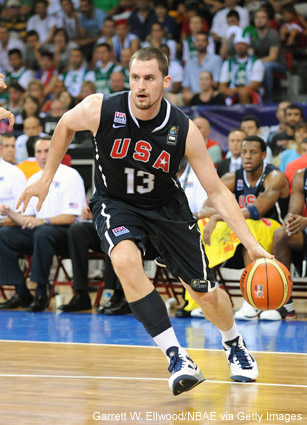 Predictably, USA and Brazil have steamrolled through Group B in their first two games. USA defeated Croatia and Slovenia by similar margins, 106-78 and 99-77, while Brazil came one point close of identical victories over Iran and Tunisia, 81-65 and 80-65.

Tonight’s match-up should significantly test the American’s lack of size, which hasn’t been a problem thus far, as they’ve out-rebounded the competition 89-74. Kevin Love is cleaning up, coming off the bench to snag 21 boards in just 26 minutes of action. His double-double yesterday is exactly why Coach K brought him along, to be a bulldog in the paint. Along with Lamar Odom, they’ll have to deal with the height and physicality of Andy Varejao, who’s been out with a sprained right ankle, and Tiago Splitter.

The winner of this game will sit alone at the top of Group B, with Team USA and Brazil inevitably advancing in first and second place. This is significant because Group B faces Group A in the knockout rounds, where powerhouses Argentina and Serbia (likely finishing their group first and second) await the third and fourth place finishers of Group B.

ESPN will be airing the game at 2:30 PM EST. ESPN 3 should have it online.