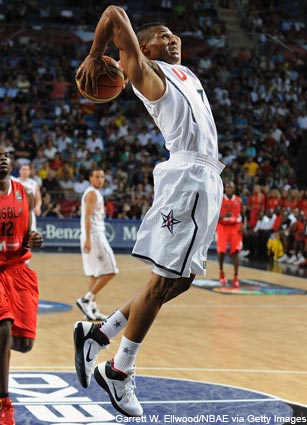 More eerily than fittingly, USA and Russia will compete in the quarter finals on the 38th anniversary of USSR’s controversial ’72 Olympic gold medal win over America. This tidbit is more for nostalgia and the history buffs, but Coach K is sure doing his part to reignite a Cold War flicker with Russia’s American-born coach, David Blatt.

Yahoo! Sports with the story:

On Wednesday, Krzyzewski mocked a story that Blatt told about crying at the conclusion of the ’72 game as a teenager growing up in Massachusetts. Blatt recently watched a new documentary on the final minutes of the game and changed his opinion on how the events played out.

“He’s Russian,” Krzyzewski told reporters. “He coaches the Russian team. So he probably has that viewpoint. His eyes are clearer now because there are no tears in them.”

“I’m not Russian,” Blatt countered to Yahoo! Sports. “I’m an American-Israeli. But I’m proud that I can view things objectively and form my own opinion with the hope that it doesn’t insult anybody. If anything, it only asks people to be a little more open-minded and fair about things.

“I thought we were past this,” Blatt said. “Shouldn’t Mike be proud that an American coach has made his way to Europe and become coach of the Russian national team? If people are still getting emotional about that thing 40 years later or trying to use it in a way to further their own cause, so be it.”

Nonsensical mind-games aside, Russia is 5-1 this tournament and has the length and size in their front-court to utilize an effective zone defense against the undersized Team USA.

This game will air live on ESPN at 11 AM EST.