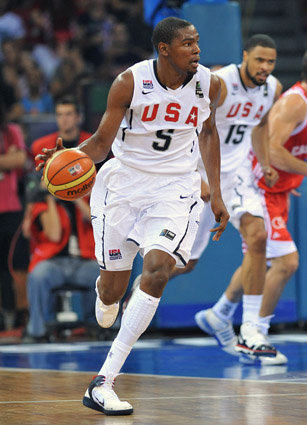 So that was easy. Yesterday’s demolishing of Croatia (106-78) sent a loud message throughout the basketball universe (particularly contrasting against Spain’s unexpected loss) that Team USA should not be underestimated. Despite all the chatter about being too small, too young and too inexperienced, the American’s put on a well-rounded offensive display. Overall they shot 55.4 percent from the field, while going 12-30 beyond the arc. After a tight first quarter, where the Croatian’s pounded the ball inside for close buckets, Kevin Durant lead the charge in the second quarter where USA outscored Croatia 26-6.

“I think we did a great job of talking in the second quarter,” Durant says. “Guys put pressure on the defense. It was a great team win. If you look at the scoreboard, everybody had a bucket, everybody contributed. It was a good win for us.”

Four of those 12 three’s were courtesy of Eric Gordon, who many thought would be cut at the start of training camp. The Clipper led the team with 16 points in 22 minutes.

When asked if he’s ever been cut from a team in his life, he casually responds, “No.” It also helps he plays with guys who can penetrate in the lane, leaving him open for the three. “This game is easier when you spot up and shoot to make shots,” Gordon says.

This afternoon the Americans match up against Slovenia. The crowd will be heavily European, whose fans came out in full force yesterday for their victory over Tunisia. Expect a sea of green.

-I decided to do a regular live blog today, seeing as how it’s a 9:30 am start on the east coast. For the few of you awake and ready, feel free to comment below. I’ll be looking out for them.

-Has Nelly’s Heart of a Champion become as ubiquitous at basketball games as Queen’s We Will Rock You at football games?

-So…much…green in the stands. Slovenia fans doing it big.

-I said it yesterday on Twitter, but Miha Zupan of Slovenia is Brian Scalabrine’s doppelganger. And he’s deaf. Just incredible. It looks like he has white hearing aids in his ears.

-Durant with a quick swipe on Slokar. Defense turns to offense for USA.

-As deafening as it is in here, USA is have no trouble communicating on offense. Easy drive and dish for Durant and Iguodala.

-Yes, it’s loud in here and very pro-Slovenia. A big offensive explosion in the first should dampen their fans’ spirit. USA jumps to a 10-2 lead on the back of Durant’s 5.

-Slovenia calls a quick timeout to try and stop the momentum, only to have Durant dunk the ball on the ensuing possession. This could get out of hand really quickly.

-Dragic was running circles against Tunisia yesterday, but he sits with two early fouls. Not so easy when you’re going up against Billups and Rose, compared to Kechrid and Maoua.

-USA getting anything they want inside. Interior defense for Slovenia is non-existent. 12 points in the paint for USA so far. 18-9 USA.

-Gay has played three minutes and already put up three shots and two free throws. You know he’s getting his.

-USA sloppy with the ball again. Make that 9 turnovers.

-On all possessions Odom keeps encouraging the team to play on. He’s getting on Gordon to hustle back and stop worrying about the refs. And he’s grabbing defensive boards. True veteran right there.

-Kevin Love enters the game at the five, and immediately Team USA falls asleep on defense. Dragic to Brezec for the dunk. 27-21 USA. It’s getting loud again…

-It’s back and forth right now. Dragic finally bags his first field goal.

-Sorry for the lack of updates that quarter, our man Tzvi had to jump in and fix some technicalities. As for the play, USA bagged some triples, forced turnovers and pushed the lead past 20. Slovenia tried to right itself in the end with some easy interior work by Vidmar. It’s 67-46 USA heading to the fourth.

-Rose with some more dribble penetration. One for the dish to Odom, the other for his on bucket.

-Odom fouls out of the game picking up his fifth.

-Vidmar is a funny guy. It looks like he pretended to hurt his hand on the offensive board, so he walked away only to jump back in when an easy put back presented itself. Now he’s at the line..

-Westbruuuk just rejected Rizvic and stared him down. Lucky for him this isn’t the NBA. He’d be T’d up so quickly.

-Down 25, these Slovenian fans are still as frequent with their chants as they were from the beginning. Gotta love fans like these.

-I’m not calling him Ray Allen, but after hitting four three’s yesterday, Eric Gordon is still sitting on zero (0-7).

-Right on cue, Gordon! He nails his first three.

-A second victory for Team USA in group play. This one ends 99-77 with Curry and Dragic sharing a laugh at mid-court. I’ll be back with quotes…

It was Kevin Durant who led the American’s early first quarter push to make the Slovenian crowd a non-factor throughout this game. He finished with 22 points on 8-13 shooting, another productive, efficient night for the team’s star. The x-factor this game was the rebounding advantage Team USA had, grabbing 50 boards (14 offensive) to Slovenia’s 33. Kevin Love contributed a workman’s double double in just 13 minutes, spelling Odom during his foul issues (he fouled out).

“It was cool,” Durant says about playing against a hostile opposition crowd. “We did a better job early on in the game of keeping them quiet and making three’s. We know we can’t go out here and blow every team out. We had to make this a grind game and did a good job of keeping our composure.”

So far Coach K’s squad hasn’t faced much opposition, but tomorrow night’s match-up against Brazil will be a stiff test against veteran NBA players like Barbosa, Varejao and the soon-to-be Spur, big man Tiago Splitter. I’ll be running Cover It Live for that game tomorrow (2:30 PM EST), see you then.