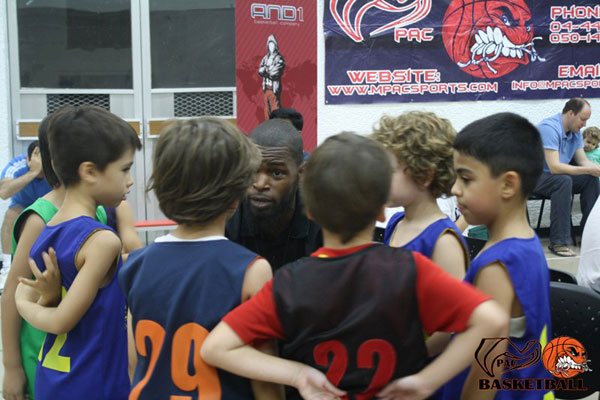 When Luqman Rashad launched MPAC Sports in 2002, he was merely experimenting with the possibility of life in basketball, after basketball. Rashad, then a rising senior power forward at Division II Lewis (IL) University, knew that when his playing career was over he wanted to stay around the game, preferably in a way that could help Chicago’s inner-city youth use basketball as a springboard for their future. So he started MPAC, a weekly training program stationed in Lewis’ gym throughout the summer, for kids to compete and improve their skills.

Eleven years later, never did Rashad expect—or even imagine—MPAC would be in charge of over 40 basketball academies, helping boys and girls of all ages improve their game and, hopefully, open up doors to play after high school.

And never, ever, did he expect to be doing so in Dubai, a small city in the United Arab Emirates, located on the coast of the Persian Gulf, 7,000 miles away from Chicago.

“It’s been a crazy ride, man,” Rashad says. “MPAC started in 2002 as an initiative to develop the infrastructure within the Chicago basketball landscape. One of our players in Chicago actually came to the camp from Dubai, and his father told me about Dubai and the need for the kids out there. So we came to Dubai in 2007, checked it out, and it made total sense. We’ve been here for the last five years. It was a unique opportunity to put some basketball DNA into the city while it was still developing, and now we’re definitely synonymous with basketball here.”

It goes without saying that Rashad succeeded in finding work after college. He learned the ins-and-outs of teaching basketball, transported some of his coaching buddies from Chicago to the UAE, and MPAC has been growing ever since. In recent years, Dubai has been globally recognized for its futuristic architecture and melting pot society—expatriates reportedly make up 91 percent of the country’s population—and it seems MPAC arrived at the perfect time.

Rashad estimates that “80 percent of the world’s cranes were in Dubai” when MPAC came over, hinting at the glaring opportunity to establish MPAC’s presence and implement its brand of basketball training in the Middle East. It is a unique story, with an already apparent impact and an unknown potential.

“Believe it or not, kids love basketball out here,” says Rashad. “Soccer is still number one, but with the NBA and YouTube and Hoopmixtape and the AND 1 Tour, kids have a foundation to dream, to motivate themselves.”

MPAC academies train over 2,000 boys and girls weekly, in four different age groups: 5-7, 8-11, 12-15 and 15-18. The curriculum starts with the fundamentals and progresses to advanced training—developing counter-moves, learning how to properly hedge on a pick and roll, perfecting shooting form, and so on—and every MPAC instructor has either played or coached at the college level.

“Some kids never played basketball before, some kids have a limited skill set, and some are very talented,” Rashad says. “Fundamentally, most were weak, but they were able to develop some skill set. It was just raw basketball. It’s been a struggle at times, but that’s why we have over 40 academies—there’s a place for everyone.”

Training sessions are held two-to-five times per week, usually in the late afternoon and evenings, and communication is easy, as English is widely spoken in Dubai. MPAC’s most promising players are handpicked to compete in a special “elite” group. Those are the players Rashad wants to help get to the next level, to play for a college team—in the UAE, America or another country.

There are seven emirates in the UAE, and thus far MPAC—based in Al Barsha, a modern sub-community of Dubai— has footprints in five of them. Rashad’s ultimate goal is twofold. He wants to create a full-scale basketball infrastructure across the Middle East; “Everything from youth leagues to academies, elite camps, bringing AAU teams over here, and just competing at the highest level,” he says. And over the next year or two, Rashad is planning to beta test MPAC academies in Omen, Bahrain, Saudi Arabia and Qatar.

But secondly, sending players across the border to a Division I school is, ultimately, what Rashad is trying to accomplish. While they’ve exported several Division II and Division II players on full athletic scholarships, including schools such as Saint Xavier University (IL), Illinois Institute of Technology and Lewis University, MPAC is yet to produce a Division I recruit. But Rashad affirms that in the next year or two, there are “a few who will take that next step and make an impact at the mid-major level.”

To improve their skills and mental toughness, MPAC’s elite players regularly compete against top college and professional teams in the area. This way, local colleges see them, with the hopes of gradually catching the attention of American colleges.

“Dubai sets the stage for everything else in the region, so we have a great starting point,” Rashad says. “There are basketball-obsessed kids and teenagers here, and their mentality has been tremendous for what we’re trying to do.”

What MPAC is “trying to do” seems to be in the process of getting done. In June 2014, it will host the first-ever Elite International Tournament, welcoming some of America’s premier high school programs to Dubai. Montverde (FL), Huntington Prep (WV), Lone Peak (UT) and Whitney Young (IL) are confirmed. This is tremendous, as MPAC’s elite group will compete against their American counterparts. Even more important, the tournament will grow support and facilitate basketball interest in the UAE.

“This tournament will be historic,” says Ahmad Elzahdan, MPAC’s Chief Operating Officer. “There will be future NBA players competing against the top talent in the Middle East and North Africa. Media outlets, scouts, coaches and recruiters from all over the world have already inquired about coming. Our plan is to make this tournament the most sought after tournament for high school kids across the world by making it an annual fixture, and there’s no better place to hold an event like this than Dubai.”

Elzadan and Rashad are palpably excited for next June, and understandably so. For now, though, the MPAC crew will stay focused on the process—teaching the game, developing players, and increasing MPAC’s reach as the premier youth basketball program in the United Arab Emirates. Not bad, to say the least.