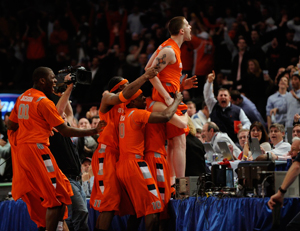 Recently SLAMonline caught up with former SLAM High School diarist and Syracuse standout Eric Devendorf. The 2005 McDonald’s All American discussed his year running the SLAM Diary, why he chose Syracuse University, his thoughts on the Cuse heading to the ACC and more.

SLAM: You sat alongside other stars members of our SLAM High School Diary Class, like S-Telfair, LeBron, KLove and more. During that period I know it was a very interesting time in your life, considering you left home to play at Oak Hill, which finished that year as the top program in the nation. How was basketball and life during that time, and did you enjoy the opportunity to give the fans a close look into your life?

Eric Devendorf: Yeah well you know everyone looks at SLAM Magazine, whether you play high school, college or professional. You know, it made people look at me in a different way and compete against me a little harder, especially at the camps and AAU Tournaments. I think it made everyone compete a little bit harder, but it bought the best out of me as well so it was a great experience.

SLAM: Recently I saw an article from the Bay Area in Michigan, which is where you are from, and they ranked you as the No. 2 player all-time from that area…

ED: They messed that up don’t worry about that [laughs].

SLAM: Yeah I do agree. Your junior year you averaged 30 points per game, right?

SLAM: There is always a large discussion among basketball coaches about the quality of basketball in public schools in comparison to the private school systems, whether it’s on the court against competition or in practice. In regards to learning, a lot of people say the public school system is sub-par in comparison to private schools. What are your thoughts on that, and did this have some weight in the choice of going to Oak Hill?

ED: Well, the move to Oak Hill was strictly from an academic standpoint, I would’ve gotten the same scholarship offers if I had went to the public school, because I really had already committed to Syracuse anyway before I went to Oak Hill. But when I went to Oak Hill it was for the experience. My team was Kevin Durant, Ty Lawson, Jamont Gordon, I had numerous guys on my team that had went DI and are playing professionally right now so the competition level in practice every day was better than when we went out and played real games. So it was good times and I still keep in touch with those guys. It was a good time in my career.

SLAM: You were one of the first players to mention Kevin Durant and how talented he was on that level in your diaries...

ED: Oh yeah definitely, was always very talented. You knew he was something special from day one.

SLAM: You were recruited by Michigan, Florida, Michigan State and you settled on SU. Why SU? Was it due to the seniors leaving and having the early opportunity to play?

ED: Well to tell you the truth I think I would’ve had the opportunity to play early wherever I went. But Coach Boeheim, he just sold the program well. I’m not saying the other coaches didn’t, but also they had that Detroit connection with a lot of guys like DC (Derrick Coleman) and a lot of other guys who went to Syracuse. It also didn’t hurt with them having Carmelo and them winning the National Championship, that also put a little extra on me going there also. So you know it was a combination of a couple things but it worked out well for me.

SLAM: That SU team was very underrated—you, [Demetris] Nichols and G-Mac (Gerry McNamara). Everyone knew their role, and despite some ups and downs throughout the season, you guys achieved what many thought was impossible at that time, which was win four games in such a short period for the Big East championship. When you finally clinched it vs Pittsburgh, many players bounced, but you embraced the fans and the moment, basking in the ambiance. How was the tournament run that year if you could describe the feelings of that?

ED: Ah man it was incredible. Just the excitement throughout the university and New York City, ’cause you know New York City is predominately Syracuse fans and just the energy the crowd gave me—I just fed off of that. And during that whole run it was just a bunch of excitement running through me the whole time. When we finally won, it just all came out. So it was a really good time.

SLAM: And how was it playing alongside those guys on that team, Nichols, G-Mac, Roberts etc.?

ED: It was unbelievable. ‘Til this day I still talk to all those guys and I keep in touch and I go back to Syracuse in the summer and workout. G-Mac is there because he is the assistant coach now, and I see these guys throughout the summer and we all still hangout and workout, so we always have a great time.

SLAM: When playing alongside G-Mac did you see him possibly being a coach in the future?

ED: You could always tell because he was always very close with Coach Boeheim and he always had the mentality of a coach. So when he took that role it didn’t surprise me at all.