With USA Basketball's growing dominance, it's time to consider a pan-continental competition. 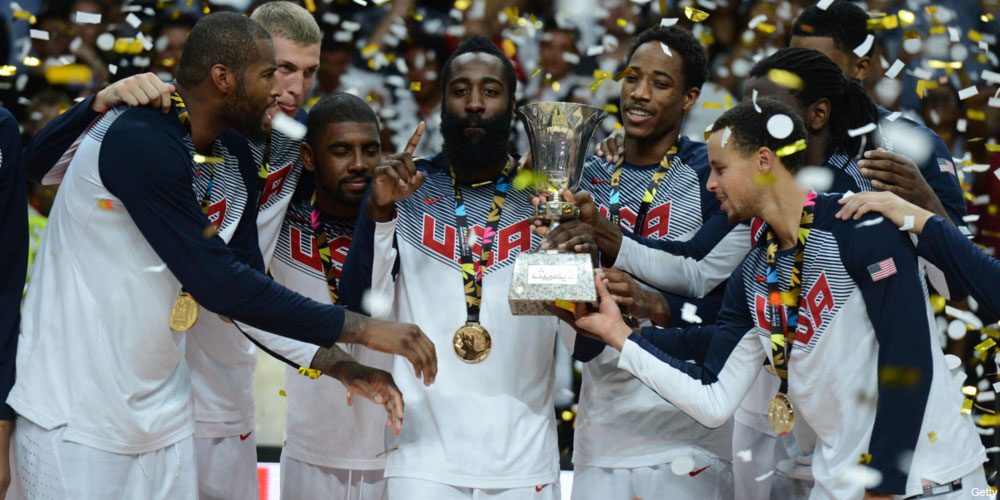 OK, rest of the world. Time to cry “uncle” already.

I’m an American, who appreciates winning, steak, Will Ferrell, and all the rest of it. But I am tiring of this headlock Team USA has every other nation in. On Sunday, the United States beat Serbia 129-92 in a FIBA World Cup title game that after six minutes held about as much drama as Anchorman 2: The Legend Continues. The US has now reeled off 63 straight wins, a run that was cool at first, when we had something to prove in basketball after losing three Olympic games a decade ago. Yes, the whole “Redeem Team” thing was fantastic. Millions of Americans tuned in to see the US make a resounding statement in the 2008 Olympics to reclaim Gold.

Less enthralling was the “Confirmation Team” of the 2010 FIBA World Cup. Or Confirmation Team 2.0, or 3.0. We get it: America is unequivocally the sport’s King once more. It’s clear that since American basketball powers actually put their mind to it, the US simply has too large a pool of hyper-skilled, hyper-athletic players—headlined by hyper-athletic, hyper-skilled young superstars (I.e. Kevin Durant, Anthony Davis)—that no other single nation can hope to match.

Spain, of course, loomed as a potential danger this summer. They boasted multiple NBA All-Stars, and a roster that in total had logged more NBA games (3,223) than even the American roster (3,213). But the host nation went cold at the wrong time, against a French team with enough athletic wing players to disrupt the Spanish perimeter offense. With far more disruptive, quicker players, the Americans would have beaten Spain too.

Now that the sun is setting on Spain’s Golden Generation, as it already has with Argentina’s, the United States is accelerating beyond the teams that have hung with them in recent years. “If anything, the gap is widening,” ESPN announcer Fran Fraschilla said last week during the Americans’ semifinal win against Lithuania. To the point where no nation poses a legit threat to Team USA at the 2016 Olympics.

France could look best on paper, but they would need four Nicolas Batums to hope to slow a team with firepower including Kevin Durant, LeBron James and Paul George. If the San Antonio Spurs, a favorite to repeat as NBA Champions this coming season, were allowed entry they would pose the biggest threat. But despite the Spurs’ Texan roots, they appear unlikely to seek political autonomy any time soon.

Instead of messing with the Olympics, it’s time to form another major international tournament that provides actual compelling and competitive basketball. Provide a venue in which the best players from non-US nations team up by continent. Call it basketball’s “Pan-Continental Cup.”

On their own, Marc Gasol, Rudy Fernandez, Ricky Rubio et al won’t beat the US in coming years. Spain doesn’t have wing players big and athletic enough to defend the likes of LeBron James and Kevin Durant. But with France’s Tony Parker, Nicolas Batum and Boris Diaw on their side, they have a legit shot. Add long, imposing players like Joakim Noah, an intermittent French national team member, or England’s Luol Deng to the mix, and the US would finally face a foe that rivals it in terms of skill, athleticism and size.

Pan-continental teams work. Look at golf, where the Ryder Cup has pitted a Team USA vs a Team Europe since 1979. Meanwhile, bowling has its own USA vs Europe competition. In each sport, over the years, the two sides have proven to be pretty much even.

This idea is also already reality at the youth basketball level. FIBA sanctions the Nike Global Challenge, an annual event in which a Pan-Asian team has competed against other nations including the US, and a Pan-African team still does. Another event, the Nike Hoop Summit, goes one step farther: It pits some of the United States’ best high school players against the similarly aged stars from all other nations. Just like in golf and bowling, this setup helps raise the game of both sides and provides better competition. Each side has won three games each in the last six years.

These competitions don’t involve nearly the same number of teams and games as the FIBA World Cup, and my proposed cup wouldn’t either. The inaugural PCC would include only four teams—the US and the best three of the pan-continental teams (including a non-US North American team). Those best three could qualify by weighing the rankings of their member nations and/or elimination games. The four-team tourney itself would be two best-of-three rounds, so nobody plays more than six games.

FIBA wouldn’t be on board with this proposal, but the money to get it off the ground can come from elsewhere. With enough star players involved, shoe companies like Nike, as well as China-based Li-Ning and Germany-based adidas should be interested. The television rights deal would be enormous, and more profit would flow in from licensed merchandise, digital and radio rights, corporate hospitality and a potential video game spin-off.

Plus, there’s already rising support from NBA team owners who want less wear and tear on their stars’ bodies during the summers, especially after the gruesome practice injury that kept Team USA candidate Paul George off the final roster. Dallas Mavericks owner Mark Cuban, for instance, has been outspoken in calling for the NBA and its players to organize their own quadrennial competition separate from FIBA. The PCC would provide a potential source of additional revenue for the owners, and certainly for the players, while decreasing their chance of injury.

Successful businessmen like Mark Cuban realize that it’s sometimes smart to put aside national loyalties. It’s a matter of fact no single European nation can by itself match the US’s economic might. But the nations who comprise the European Union can, as one, rival the US and tout themselves as the world’s largest economy. These countries have all agreed to make certain concessions—to some extent putting aside their national pride—in order to accomplish something they believe makes a stronger worldwide economy. It’s time we see a similar thing happen in basketball.

The US can’t remain invincible forever. But when that next loss comes, will it be because the law of probability caught up with the US and it had an off day—or because two teams played magnificently, produced one of the greatest spectacles in sports history and someone eventually had to lose?

Who can argue it isn’t?

Below are possible rosters for six all-continent teams, using only players who participated in international competition since 2011 at any age level. They are assembled with size and athleticism in mind, and ranked in projected order of finish worst to best.

4. Pan North America (except US)

*Under Armour just signed Mudiay, a potential No. 1 pick in next year’s NBA Draft, to a lucrative shoe deal. In helping Mudiay gain more exposure and potentially become the first great guard out of Africa, Under Armour potentially would have a vested interest in becoming a sponsor of this pan-continental cup.

*** Russia (but not Baltic states), Turkey and rest of mainland Asia