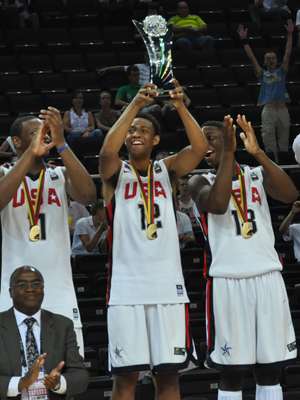 As the game of basketball continues to expand and globalize, we’ve witness the international talent improve drastically and shorten the competition gap a bit. But the results from this past week at the FIBA U17 World Championships in Lithuania reminded us that the USA still sits well ahead of the pack, with its future looking quite bright. That’s because the American team brought home the gold medal after defeating Australia in a 95-62 victory.

The American team went a perfect 8-0 during the tourney. We’ve all heard that defense wins games and this U17 squad proved to us all why. While averaging a tourney-high 100 points per game, USA held opponents to a low of 60.1 points. They also did a great job in contesting shots, as opponents were held to 33.8% from the field, including 21.8% from behind the arc, while USA averaged 4.75 blocks per game. The great defense from Team USA led to opponents feeling the pressure, as they averaged 13.6 steals and forced opponents to 22.3 turnovers per outing. The averaging margin of victory for the Americans was by 39.9 points.

The USA was led by Conner Frankamp’s 22 points in the championship game. Frankamp, a 6-0 Kansas-commit, is highly touted for his crafty PG skills and shooting abilities. Jahlil Okafor, a 6-9 center out of Chicago, finished with 17 points and eight rebounds in the final game, and was named the tourney’s Most Valuable Player. Okafor averaged 13.6 points and 8.3 rebounds throughout the tourney. Justise Winslow joined Okafor in the All-U17 World Championship team after putting up 13 points, 11 rebounds, four steals and three assists in the chip, averaging 9.9 points and 8.8 rebounds in the eight tourney games. Winslow is a 6-5 lefty wing from Houston (TX) that’s known for his explosiveness and ability to get to the rim. He’s ranked among the top players in the class of 2014.

Another player that stood out for the American team was Tyus Jones. The 6-1 Minnesota-native exhibited just how great of a point guard he is by distributing the rock and setting up for teammates. He finished with a team-high 43 assists during the tourney, which as about 5.37 assists per game, while also averaging 8.5 points. Frankamp led the team in scoring, averaging 14.1 points.

The American U17 squad all-time record at FIBA U17 World Championship improved to 16-0, after also finishing a perfect 8-0 at the inaugural FIBA U17 Men World Championship in 2010. After capturing the gold medal that year, 2012 NBA Draft lottery pick Brad Beal was named the tourney’s MVP.

“It feels great (to win MVP),” said Okafor, according to a press release by USA Basketball. “Brad Beal was a lottery pick, so it’s just an honor to be a part of that. I’m extremely happy, I can’t even explain. I’m on cloud nine. We started this in October 2010 and now it’s over. So, it’s a sad thing, but I’m very happy because we got the gold.”

“It feels really good,” added Winslow, about making the All-U17 World Championship team. “It’s a real good individual honor, but I couldn’t have done it without my team and the coaches. The coaches really motivated me. Ever since I got invited, last year I didn’t make (the U16 team) and they just told me to keep working. That’s what I did. I just tried to play my role, get rebounds and get some hustle points and everything worked out.”

Dakari Johnson and Jabari Parker suffered injuries and had to sit down for a few games.

Basketball around the world might be expanding to new horizons and the pool of talent might be growing, but if the 2012 U17 USA Men basketball team was any indication, there shouldn’t be any disputes over which country has the best players at the youth level. It would have been nice to see Andrew Wiggins, the top ranked player in the class of 2014, play for Canada and go against this American team but he instead played at the U18 FIBA Americas Championship in Brazil last month, where the USA U18 team also brought home the gold medal after going undefeated in all five game while averaging 97.2 points per outing.

Now it’s the pros’ turn to bring home the gold.