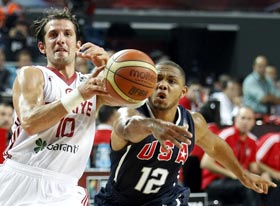 Typically, the summer sport’s world is dominated by baseball, pre-season football talk, and major tennis and golf outings, leaving hoopheads longing for something to watch. But this year (with the help of Nike and the ESPN family of networks), we were given the opportunity to see something great.

The Game in one of its purest forms. Guys playing not for the money, but for pride, driven by their passion for the game.

But as Team USA prepared for the FIBA World Championships, the hate was about as heavy as Shawn Kemp. The “B Team,” some called them. Granted, these weren’t the creamiest of the crop, but the “B Team”? Really?

Personally, watching them win left me a proud American, telling myself, “I Love This Game.” Seeing them play since early August, we were able to witness the entire ride. We got to watch them grow up and come together as a team, the final game being the fulfilling culmination of it all.

When they lost in ’02 (which was made up of “second-tier” guys just like the current team) and ’06, Americans were disgraced. Astonished. Ready to banish George Karl, Paul Pierce and the like from the country, forget the League. But the team that finally righted the ship, bringing home World Championship gold for the first time since 1994, hasn’t been met with the same enthusiasm.

Given all the hate, I think it’s time to show some love:

1. First and foremost, shout out to Kevin Durant. From day one, it was clear: He had to be the guy. Coach K had to ask him to be more selfish. With all the pressure on him, he stepped up. Big time. And when it counted most, is when he was at his best. Dropping 33, 38 and 28 in the final three games, setting all kinds of records for Americans in international play. Even when Team USA’s offense, or lack thereof, seemed to come to a standstill, Durant carried them singlehandedly, and was the lone Team USA member to average double figures, putting up just under 23 points per game.

2. Shout out to the the vets Chauncey Billups and Lamar Odom, or as ESPN analyst Fran Fraschilla dubbed them, the “safety blankets.” Early on, both stumbled. Billups was suspect on D, and uncharacteristically missed free throws — the most clear indication of his struggles. Odom was quiet and ineffective, too. But down the stretch of the tournament, both, especially Odom, answered the call, and showed why you’re taught to respect your elders. Odom, in particular, was absolutely huge, snagging 33 boards over the last three games, and igniting the fastbreak that was so key to the team’s

success. He seemed to be in the right place at the right time, time and time again. Billups steadied up, and finished as the team’s second leading scorer. The “old-heads” got it done.

3. Shout out to the energizer bunnies, Eric Gordon and Russell Westbrook. Early on, there was speculation that one, or both, would likely end up being cut. But in practice, scrimmages and friendlies, each earned his way on to the team and didn’t stop there. Both played their way into the rotation, and neither would have a bad game. When the starters came out flat — which happened on more than one occasion — Gordon and Westbrook were always able to provide a shock of life. Gordon solidified himself as one of the deadliest shooters in the game (if we didn’t know it already), looking so good that some thought he should even be starting. Westbrook was a highlight waiting to happen every time he touched the floor. His shooting was considered a weakness, but he knocked several nice mid-range jumpers (and even a couple threes, granted, the line is shorter), and used his explosiveness to serve as one of the team’s best zone busters. To top it off, both players locked up on D.

4. Shout out to Derrick Rose. His play tapered off a bit as the tournament went along, but that doesn’t discount the things he did earlier on; made some great plays late in games or in the shot clock, and, for a time, was the best offensive option next to KD. The confidence he was playing with was great to see (especially for Bulls fans), as he showed off his much improved jumper, and looked to have gotten even faster. If that’s possible. Even after not playing the entire fourth quarter in the semifinal game against Lithuania, he bounced back and helped seal the deal in the championship the next night.

5. Shout out to Andre Iguodala. The fact that he played as much as he did — starting every game — lets you know just how good of a defender he is. His shot looked terrible (though he shot 58 percent), but at the other end, he was all clamps. Guarding 4-men, he defended inside and out, post and perimeter. He got his hands on a countless number of balls and led the team in steals with 16 for the tournament.

6. Shout out to Kevin Love. Minute for minute, he may have been the most impressive, most productive player on Team USA. His playing time was inconsistent, but what he did when he got he in wasn’t. He dominated the boards, finished around the basket and stroked it from the outside. Until the late surge by Odom, he was the team’s best big man. All this in spite of the fact that he looked like Mike Posner (word to Lang Whitaker).

7. Last but certainly not least, shout out to Jerry Colangelo and Coach K. Colangelo has been phenomenal restoring a sense of culture and pride in Team USA, working from the ground up. Coach K proved why he’s one of the best to ever do it. While it helped to have a group of guys willing to put egos to the side, he developed the chemistry to a T and perfected the rotation by the end of the tournament. He’s on one hell of a run right now, also. Winning Gold in 2008, an ACC and National Championship with Duke, and now this. Not to mention, the Blue Devils have their best team in years and should enter — and possibly finish — the season as the best team in the country. And he’ll be with Team USA again in 2012, which he said will definitely be his last go-round. Calling him the greatest coach ever is arguable, of course, but especially given his current run, top three ever is not. If he wins another national championship or gold again in 2012, that case for best ever could be solidified.

The games were a chance to see the future of the NBA. Never before has there been a national team consisting entirely of players poised to have the best season of their life. Save Odom, Billups and Tyson Chandler, every player on that roster, from KD to KLove will enter the ‘10-11 season ready to have the finest year of their young careers. Playing with Team USA will be a major factor in their growth.

That being said, it will be very interesting two years from now when the Olympic squad is being put together. The big shots (Kobe, LeBron, etc.) will likely be back, but they will (or at least they should) have to earn it, because these young boys who played this year will be hungry, and if they’re not careful, somebody’s gonna get their spot taken.

They didn’t always look marvelous and certainly had their flaws, but Team USA 2010 went to Turkey and held it down. Shout out to them for doing so.