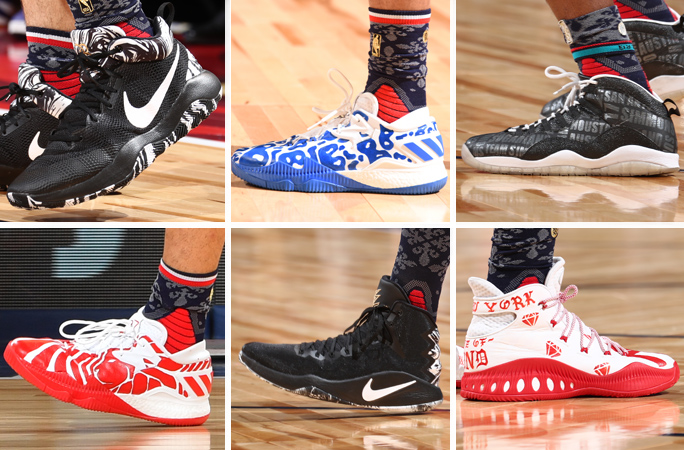 The future of the NBA was once again on the display in the League’s annual Rising Stars Challenge.

The game pitted the World versus the USA and it was a coming out party of sorts for the Nuggets’ Jamal Murray as he finished with a game-high 36 points to lead the World to a 150-141 victory while securing MVP honors. On Murray’s feet was the adidas Crazylight Boost 2016 in a white/red colorway with a special graphic print.

The custom graphics seen on Murray’s kicks was a theme seen on models worn by adidas athletes including Dante Exum, Brandon Ingram and Kristaps Porzingis whose pair of adidas Crazy Explosives featured “A New York State of Mind” graphic. With Nike forgoing an All-Star collection this year, a majority of its players took the floor in BHM models of their signature kicks. Karl-Anthony Towns donned the Nike Hyperdunk 2016 and Devin Booker played in the Nike Zoom Rev 2017.

Make sure to check out the rest of the sneaker action from the Rising Stars Challenge and let us know your thoughts in the comments below.