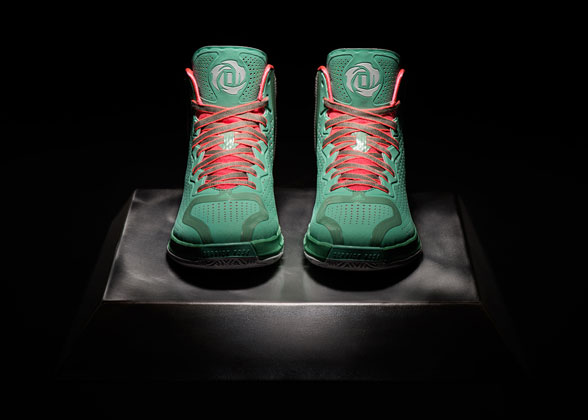 Named after the southern California beaches, the adidas D Rose 4 ‘Boardwalk’ colorway pays tribute to where Derrick Rose spends his offseasons training. Check out all the details, courtesy of adidas Basketball:

The shoe features washed out pastille tones of mint green, tan and pink to represent the ocean, sand and architectural details found throughout the southern California beaches.

“It’s important for me to work on my game every day during the offseason,” said Rose. “I chose southern California as my summer home because it’s a place where I can focus on training and getting ready for the season. I love this colorway of the shoe because it tells the other side of the story about where I spend my time.”

The adidas D Rose 4 represents the transition of Derrick from his focused, humble and understated off-court personality to his fierce, attacking and aggressive on-court playing style. The mint green front half of the shoe features a washed out nubuck finish representing the Pacific Ocean.  The back half of the shoe features a GEOFIT collar and SPRINTFRAME contrasted in tan with additional accents in pink.

The shoe features the distinctive D Rose logo on the tongue and collar, made of three petals that revolve around the letter “D” and number “1” in the center, the D Rose logo represents his three brothers and mother.

The adidas D Rose 4 “Boardwalk” drops November 7 for $140, and is available at adidas Basketball.