“Thirty years ago, that’s me.”

Thirty years ago, it was MJ and the Air Jordan I. This year, it’s Russ and the Air Jordan XXXI. Passionate, intense, athletic, brash, bold. The list of adjectives that describe both Jordan and Westbrook are indeed eerily similar. Fitting, then, that a sneaker that simultaneously pays homage to Mike’s first and most famous piece of footwear would in its 2016 reincarnation be designed for the gravity-defying, transcendent style of Westbrook.

During July, in the middle of a scorching hot summer, Jordan Brand took over the massive event space at Brooklyn Bowl Las Vegas for several days to host the Air Jordan XXXI launch event, plus give an experience of a lifetime to local fans and high school players in town for AAU tournaments. It’s the second straight year Jordan’s taken over this particular space, and everything was bigger and better in Year Two, from the interactive dunking and shooting competitions, to t-shirt customization, to the world’s coolest in-house barbershop and endless supply of free grub—and of course, the bowling. Jordan Brand athletes Jabari Parker, Jimmy Butler and Carmelo Anthony made appearances throughout the week to greet fans and hang out.

MJ’s words of praise rang out through a video on the big screen before Westbrook took to the mic during the official #AJXXXI launch to talk about the sneaker itself.

“When I first seen it, I think it was last summer, and I was like, Man, this is going to be crazy when everybody gets a chance to see this. And I was excited to get to wear it,” Westbrook told the assembled crowd of media and fans, later adding: “A lot of kids like to wear basketball shoes all day long, and I think this shoe can be worn with jeans, and obviously, on a basketball court.”

Already the face of the Oklahoma City Thunder franchise following the departure of Kevin Durant, Westbrook will also now be the public face of the AJ XXXI, a high honor not lost on the All-Star point guard.

In almost every instance, the initial launch of a new Air Jordan is met with diverging opinions. That’s what happens when you go above and beyond to defy expectations and challenge the norm. Of course, there are the Jordan heads who will worship every new silhouette from the moment they lay eyes on it. Likewise there are the Jordan haters who will rush to social media to throw shade. Truthfully, though, the story of the Air Jordan line isn’t just about its individual models—though they are typically the best performing on-court kicks on the market immediately—but rather about the history, and where each new sneaker fits in the long line of supreme performance game shoes.

In reality, that commitment to pushing the limits of pinnacle performance has assured that Jordan Brand never plays it safe. As Jordan Senior Designer Tate Kuerbis put it to us, “Every Jordan has something on it that you just scratch your head and go, Wow, how did they do that?”

In the case of the Air Jordan XXXI, the head-scratchers start with the fact that the last time a Nike Swoosh appeared on an Air Jordan was the AJ I. The last time the “wings” logo appeared on an Air Jordan was the AJ II. The AJ XXXI bears both of those iconic marks. The side-by-side of the Swoosh and the Jumpman logo on the XXXI silhouette is admittedly jarring, but that’s by design: “That came from Michael,” Kuerbis said following the sneaker’s Las Vegas launch. “I like the fact that Michael was bold enough to say, Let’s do it. He really did have the idea, like, Let’s have the Swoosh, but let’s have it fade into the Jumpman. And after we did it, it made a lot of sense.”

And that’s just the aesthetics. The material changes in the Jordan XXXI start with a flexible Flyweave upper that transitions to synthetic leather at the toe as a nod to the Jordan I.

“It’s important for people to understand their history to get to where they want to be in the future,” Yuron White, Vice President of Jordan Footwear said after the launch. “The symbolism of the XXXI really led us back to the I.” Of the fusion of strong fabrics, Westbrook noted, “The transition from the Flyweave to the leather is a big thing.”

Technologically speaking, the AJ XXXI is a basketball beast. The result of a project that required the brain, design and concept power of about 100 people according to White, the XXXI has Flywire construction you know and love, plus an internal bootie that connects to the shoe’s tongue for better lockdown and fit. A modified herringbone traction pattern on the outsole has enough grip to keep up with the likes of Westbrook. The idea of getting the player as low to the ground as possible—as the AJ I once did in revolutionary fashion for its era of sneakers—is what led to perhaps the most important alteration in the XXXI: it features full-length Zoom Air, which would be a comfortable ride on its own, but combined with the FlightSpeed tech we’ve known since the XX8, it might be the coziest basketball shoe ever constructed.

Listen to the geniuses behind the sneaker and it’s clear that propulsion is the Jordan performance line’s No. 1 priority. 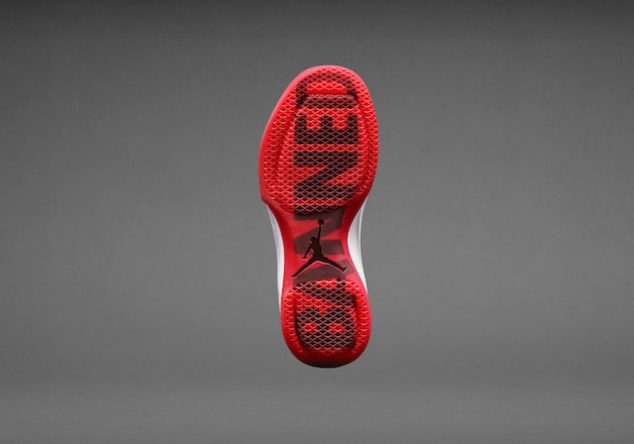 “We’re going to lead the industry as it relates to propulsion,” White said bluntly. “And this is something that comes from Michael. Michael was like, If you think about the [Jordan I], I love the forefoot containment, I love the underfoot and the heel support, and so I want you guys to take the lead and innovate there. And so that’s where you see the Flyweave material in the forefoot. Obviously Tate tried to do everything we could to get that competitive advantage, which means full length Zoom Air, FlightSpeed technology.”

Jordan’s design team wanted there to be no wasted motion in the athlete’s foot, since oftentimes players complain about sliding around inside their kicks. For a player as explosive as Westbrook, in particular, he needs to feel locked down, 100 percent, to tap into all his basketball superpowers.

“With Russ, half a second is all he needs from top of the key to dunking on you,” White pointed out, quite accurately. “He led his team in dunks, and most of those were blow-bys, so we wanted to make sure that we continue to give that competitive advantage to him, which ultimately leads to the consumers.”

The general public can get its hands on the Jordan XXXI on September 3, when the initial “Banned” colorway hits retail with a price tag of $185. (The matching “Banned” Jordan I will release the same day, for $160.) And given the silhouette’s nod to the AJ I, Kuerbis is confident the XXXI will resonate not only as the pinnacle performance product in its category, but also as a casual option for elite athletes, sneakerheads and everyone in between.

“The player is going to be able to wear this on-court and perform really well, but I think having a shoe that you can wear off-court and get that style aspect is not an easy thing to do. It’s a really hard challenge. So for me,” Kuerbis said, “that’s a gamechanger.”

Creating a sneaker that checks all those boxes off for the common consumer would be hard enough, but knowing that Westbrook, himself hurdling toward top-tier pop culture style icon status, would be the judge of the shoe’s overall artistic appeal meant the pressure was really on. Right?

“I just give them all the input I can on how it feels on my foot to help Tate and those guys that design the shoe, kind of give them a sense of direction. They do an amazing job,” Westbrook said before smiling and adding, “My job is to wear it and perform in it.

OK, so you’re probably thinking that Russ is contractually obligated to never admit if he wasn’t a fan of the newest AJ silhouette. But something tells us he’s not the type to bite his tongue, either. If he were, you really think Mike would be drawing the comparison to himself as a youngin’? That’s high praise you rarely hear from the GOAT. And it’s precisely the reason that Jordan—the man and the brand—chose Westbrook to carry on the torch as the player that all performance kicks will be developed to support. 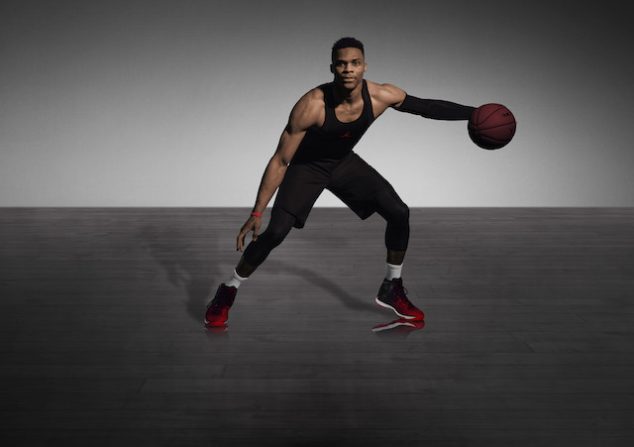 In many ways, the XXXI feels like a “reset button” of the Jordan line, beginning anew 30 years after it all began. The Swoosh logo, the embossed wings logo on the ankle collar, the red and black launch colorway, the reminiscent shape of the silhouette souped up with all the technology advances of the last 30 years.

While a common refrain from the aforementioned haters is that JB leans too heavily on its history, like it or not that rich history will forever be tied to every new sneaker, from II to infinity. The XXXI is not only a reminder of the revolution that its oldest ancestor ignited, but a reminder that there are still barriers to be broken, still risks to be taken, still room to crash the party and fuck up the norm with some out-of-the-box thinking. Call it bravado, braggadocio, swag or otherwise. Look no further than Westbrook’s tattered post-game ’fits that buck the so-far-gone NBA dress code.

“It started with Michael. We started as a basketball brand. Our obligation, and what Tate works to do is to put the best performing basketball shoe in the marketplace for the consumers to be able to play the game,” said White behind closed doors with both the I and the XXXI at his fingertips, at once acknowledging the past and seeing into the future. “What excites me more than today is where we’re going to take you guys tomorrow.”