Allen Iverson Speaks on Kicks, His Legacy, the Media and More 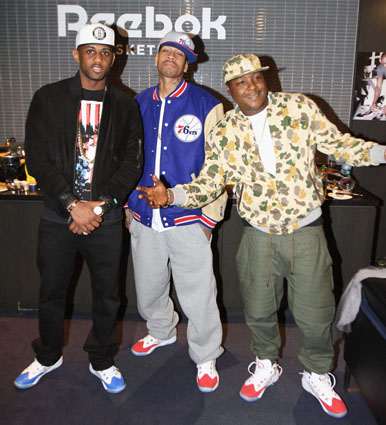 Last Friday night, while the Brooklyn Nets and Miami Heat battled at the Barclays Center in a relatively exciting early regular season game, Allen Iverson sat a few hundred feet from the court in a luxury suite rented out by Reebok to celebrate the release of the Reebok Q96 and the Pumpspective Omni, the former of which is the latest iteration of the 11-time All-Star’s still-popular sneaker line.

During the contest’s first half, along with a few on-camera interviews—one of which aired live on ESPN—AI spoke to a small group of print and online reporters in two separate sittings. He spoke about his kicks, his career, his legacy, media-derived rumors about his life and plenty more. Below is a condensed and edited version of the sessions.

Is it weird being in an NBA arena on opening night and not playing?

Allen Iverson: Yeah, absolutely. [Laughs] You knew the answer to that one.

How do you feel about the new shoe?

AI: Man, obviously it’s exciting to have a new one come out. It always seems like the first time, because it’s a new you.

This is the first one post-career, too.

AI: See, I never looked at it like that. Now you got my mind all—I ain’t look at it like that. That makes it that much better, thinking about it, knowing that it’s a new one post-NBA and all that.

Did you get to play in them at all? Like just messing around or whatever?

AI: I played in them in Indonesia. I was sorry as hell out there, too.

What was that like? Because you played in China a little, too—how different is playing in Indonesia from playing in China?

Did you hear LeBron called you pound-for-pound the greatest player ever?

How’d that make you feel?

AI: I mean, it made me feel good, because I know how great he is. But that’s my little man. I know he feels like that. He’s my little man. For him to say that, he didn’t have to say that for me to know it and acknowledge or whatever, just like he knows that I know that he’s the best playing the game. It was great, I think, for him to say that and for people in the world to acknowledge it and respect it, because it came from him. I love him for that.

Is that a part of your legacy that you’re really proud of, as a smaller guy who fought a lot of tough battles?

AI: Yeah. You know how it go. See, the questions that you’re asking me, you know the answers to already, especially if you’re any type of basketball dude. All us dudes who know basketball, we all believe in the same thing. At the end of the day, all of us know what time it is. All of us know that it’s Michael Jordan, and then Kobe came along, and Kobe is like Mike and he plays like him. All of us know that we can debate whether it’s Mike or LeBron and nobody else is in that conversation—all of us know that, man. All of us know it. All you gotta know is it’s basketball. It’s easy, man.

Did you ever go up against guys in the NBA while they were wearing your sneakers?

Did you give him shit about it?

AI: No, because I would never disrespect nobody like that, you know what I mean? I love the fact that they respect me enough to wear them playing against me. I look at it as a compliment.

C-Webb wore your shoes too, right?

Did he talk to you about it first before he started wearing them? Like, to make sure it was cool?

So with the new shoe, do you want to have a role in picking who gets to wear it? Or do you see it the same way, where it’s like, if you want to wear it, that’s just a respect thing?

AI: Man, if you wanna wear my shoes for whatever reason, I’m cool with it, and I’m gonna love every minute in it. Just like I like to see little kids wear ‘em, I damn sure like to see grown men wear ‘em.

Do you have a favorite color way?

AI: Red and white. Because they’re original, they’re the first ones.

Since the retirement and even with a lot of the shoe stuff, that picture of you stepping over Tyronn Lue in the Finals has made the rounds. Do you hear from him at all?

AI: Man, listen. I don’t, and we don’t talk about that at all when I do see him, but I love him. I never thought that somebody I would be in verbal wars with, physical wars with in a game, and have a certain dislike for during competition, that I could feel like I feel about him. Like, I love him. He’s my man. Me and him are cool as hell with each other. But that whole thing was, he looked up to me when he was in college and growing up, and it shows what type of man he is and was because he didn’t back down to me because of that. And I respect him a whole lot for that.

When people are talking about the best in the game, who impresses you the most who doesn’t come up during these interviews? A player who’s not an All-Star.

What is it about his game that impresses you the most?

AI: Everything. Everything. He can do it all. That’s how hard this League is. That’s how hard this profession is. That’s how great these guys are, because a guy that great doesn’t even get mentioned like he’s supposed to. He’s incredible, man. He’s incredible out there on the basketball court. He can score; he can defend; he can set people up; he can do it all. He’s obviously not on a team that allows him to be put in a situation to succeed and be a household name. Kids might not know him unless they’re kids from wherever he plays at. But guys like me that respect the game and know what it’s about, it can’t go unnoticed. I know how great he is. That’s what makes it so hard when it comes to the NBA. There’s so many guys that I see night in and night out outside of the NBA, that’s supposed to be in the NBA, that’ll never get a shot because of whatever reason. Even streetball dudes. You see some streetball dudes [and you’re] like, how are you not in the NBA? But then you gotta question them, too. Like, what have you been doing to not be in the NBA?

If you had any advice for a young player in the League right now, what would it be?

AI: Same thing I would tell anybody, whether it’s somebody coming into the League, somebody that’s playing pick-up basketball, somebody that’s playing Pop Warner: Play hard. You can’t miss with that. And that’s another thing about the fans in Philly—they never gave a damn about if Allen played well some nights or whatever. We know he’s gonna give everything he got. Regardless if he miss every shot, regardless of if he has 20 turnovers—we know he’s trying to win. That’s what it’s about in anything. Just giving all you got. That’s the only thing you can ask for from somebody that’s doing anything. Shit, if you’re talking to a girl, give all you got. All your best lines, use ‘em. Don’t save ‘em! Use ‘em. In anything you do, any story you write, make it your best one. Make it to whereas you feel like it’s your last one. God might not open your eyes the next day.

What’s the one question that you’ve always wanted people to ask you but no one ever asks?

AI: I would ask me: From the perception that we make you to be, as far as rumors and things we hear, does it hurt? And my answer would be, Yes, it does. Especially when it’s not the truth. I look at the situation and as long as a person don’t call me a rapist or a child molester or a racist, I’m like, Aright. As long as you don’t call me that, then I won’t defend myself. I’ll let it go as long as you don’t call me that. But a lot of other things that people say that’s not true—they hurt. The shit hurt. People think that I’m some tough, renegade, black-hearted-being, evil, no-feeling-having mothafucka, but that ain’t me. I think some media outlets and some people know that about me. They know it gets to me. They know it bothers me, so I think that’s why they do it. But I’m human just like everybody else. I’ve got feelings just like everybody else. When motherfuckers write shit about me that’s not true, damn right it hurts. It hurts even more knowing my kids are old enough to know what it is now. That’s what I would ask myself. I would love to answer that question so people could know that—that Allen Iverson really does have feelings.

AI: OK, that’s another great question. I want to, at times, but the satisfaction of answering it and responding to it does everything that the person that wrote it or reported on it wants. You’re doing just what they want you to do. And I mean, my ex-wife, my mom, my aunts, my uncles, my friends, they’re like, Man, respond to this shit! They’re reporting this and they’re reporting that, and I be wanting to do it so bad, but I feel like that’ll just keep it going and keep it going. Then I respond, then they say something else, then they want me to respond again, then I respond, then it keeps going on and on.

When did you figure it out, to ignore those rumors?

AI: I didn’t figure it out. I think with me, I would’ve been did it—responded—but the people that love me, I take their advice. I know that  if I respond to everything, it’ll keep going on. It’ll be just like, somebody will keep doing it because they know they’re gonna get a response from me. So my whole thing is, if you love me, then love me. If you don’t, then believe what you hear and run with that, because even if you love me, or if you don’t love me, you ain’t gonna love me no more for responding to the shit. You don’t love me anyway, so what difference does it make? Why am I trying to prove anything to you?