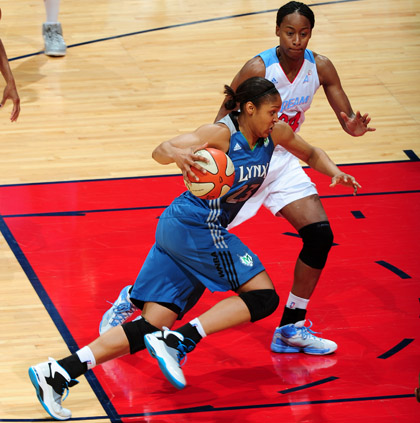 Over the course of the line’s lifetime, Jordan Brand has become synonymous with excellence, exclusivity and style. In keeping with that ethos, JB is especially judicious in selecting athletes to represent them on and off the court—think Carmelo Anthony, Chris Paul and Dwyane Wade. That’s why Jordan’s recent decision to make Maya Moore the brand’s first female endorser makes so much sense.

Don’t believe us? Ask MJ himself.

“Maya’s strong work ethic, competitive nature and high basketball IQ makes her a tremendous ambassador for the Jordan Brand and the game of basketball,” Michael Jordan explains exclusively to KICKS.

In her four years at UConn, Moore established herself as one of the best college basketball players of all time: She won back-to-back Player of the Year awards, recorded 150 wins and played a major role in the NCAA record 90-game win streak that spanned the better part of her stay on campus. Not surprisingly, in this past April’s WNBA Draft, the 6-0 jack-of-all-trades was selected first overall by the Minnesota Lynx. Shortly thereafter, in mid-May, the folks at Jordan Brand made her their first choice as well.

“As a student of the game, it is a dream come true to align myself with a brand that has a rich history in sports,” Moore said upon signing. “Like most kids, I grew up idolizing Michael Jordan and continue to work relentlessly to reach his iconic status on the court.”

While Moore’s signing is a big step for her and JB, it’s also a giant leap for women’s basketball, which has gained an unquantifiable amount of exposure through the Jordan/Moore union.

“The more popular it gets that way, the more coverage we’ll get and it will keep going in a circle, getting more popular,” said Moore.

As for the kicks themselves, on June 3, 2011, Moore made her WNBA debut in a custom colorway of the Jordan Fly Wade that matched the Lynx’ blue, silver and white jerseys. Aside from basketball skills, a glimmer of her endorsement savvy was on display earlier that day, too, when she announced what she’d be rocking by tweeting out (@MooreMaya) a picture of the PEs to her more than 30,000 followers.

Although there are no current plans for a signature shoe, Jordan Brand clearly sees Maya Moore as the future of woman’s basketball, and they plan on being there with her every step along the way.