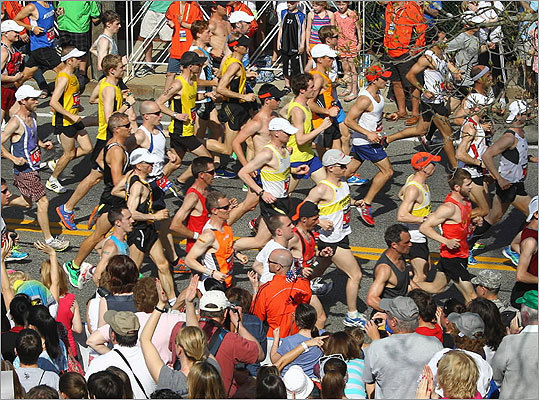 You may remember from my post in mid-March that I was training to run in the world’s most prestigious road race, the Boston Marathon. No, I didn’t qualify, but as a member of the media, I was able to run the race through SLAM’s friends at adidas, the official footwear and apparel provider for the race. With the wonderful Caitlin Albaugh of adidas PR serving as my conduit, I arrived in Boston last Sunday and headed straight for the race Expo to pick up my official bib number and check out the wares from all sorts of running-related brands. Given the brand’s deep-rooted partnership with the Boston Marathon, it was no surprise that adidas had the grandest set up of anyone in the Expo.

There was certainly a buzz in the air about the forecast for Monday’s race, but I think I was sort of in denial about the whole thing. It couldn’t possibly be almost 90 degrees for the Boston Marathon, could it?

Well, Monday did start warm, but it was all good. I took the bus out to the race start in Hopkinton, had some snacks, mingled with other runners, and slowly started coming to grips with the conditions. I decided to put on copious amounts of sunscreen and wear a hat, two things I never do while running (usually not doing it long enough for it to matter, certainly not in super-hot conditions).

The start was extremely well-organized (as was the whole weekend), and the first half of the race was, honestly, very fun. You start in a part of Massachusetts that feels more rural than suburban—running straight past farms—and the fans are great, and people are listening to the 11 a.m. Red Sox game on their radios in their front yards.

I was definitely soaking in the atomosphere, and with my adizero Adios 2s pushing me along, I was running about 9-minute miles, my typical goal and one that, if nearly maintained, would allow me to finish in less than 4 hours. When the course reached the Wellesley “Scream Tunnel,” which stretches about 1/3 of a mile on the right side of the course and is, quite literally, made up of screaming college girls asking you to kiss them, I had run about 12 1/2 miles total and didn’t have a care in the world.

I was still feeling good when I passed the halfway mark in tasteful/rich downtown Wellesley (sample business I noticed: a pizza shop called The Upper Crust), in part because there had been limited uphill stretches of the race. But from that point on, the party was pretty much over. There were hills around the 14-, 16-, 18- and between 20-21 (the famed “Heartbreak Hill.”) mile marks. Needless to say, my quads did not enjoy this part of the race, and “walking” would be a far better description of what I did on those hills. I rallied a bit after Heartbreak Hill, spurred on by super-supportive (read: likely drunk) Boston College students and the sight of my parents and my daughter cheering me on around 21.5. Finishing in less than 4:00 was no longer doable, but I told my family that I’d probably finish in around “4:25.”

Unfortunately, from that point on, though, I was pretty cooked. From mile 22 to the finish, I probably walked as much as I ran. My splits kept slowing, and I finished with a career-worst time of 4:42 (my five previous marathon times had ranged from a best of 3:49 in Chicago to a worst of 4:27 in New York).

Temperature—and the cramping it caused—was the biggest problem. It was 81 when the first group of runners began at 10 am, and reached a high of 89 at 12:30 pm. Especially considering that most people in the race probably hadn’t felt temperatures like that since last summer, it was the type of day where you’d normally scale back ANY plans of physical activity, or make sure you did you running early or late in the day. But we were running right in the heart of the day. What’s more, since it is still pretty early in the spring, many of the places on the course with trees nearby couldn’t offer any shade because their leaves hadn’t grown in yet. The hat definitely increased how much I sweat, but at least it kept the sunburn to a minimum. I’m sure I could have trained a bit harder for the race, but there was really no way for a runner from NY/NJ to prepare his body for how it would react to running this much in such heat.

By the way, that’s me, in hat and unpurchased MarathonFoto shot, at left. The wider crowd shot below is from the Boston Globe, which has an awesome gallery of race day here….

I obviously wasn’t the only person slowed by the conditions. The winner, Wesley Korrir of Kenya, ran a 2:12:40, the second-slowest winning time since 1985. adidas’ most highly touted male runner, the defending champ and pre-race favorite Geoffrey Mutai, ran a recond 2:03:03 last year but this year he dropped out after 18 miles.

There were a few “celebrities” who ran as well, and their times aren’t much better than mine. I know at one point I was about 20 yards behind Kristine Lilly.

Some other facts about the weather’s impact included that of the 22,551 people who started the race, approximately 950 dropped out and more than 2,000 received treatment in one of the medical tents that dotted the course and after the finish line. I was actually pleasantly surprised to find out that no one died.

Yes, I realize some of these facts are pretty grim. The day wasn’t though. Not if you like the sport of marathoning. As bad as I felt for those last four miles and the first 30 minutes after I finished, I felt an incredible surge of pride that has already lasted much longer than the pain—and will last my whole life. The message sent out by the race organizers—typically the most dedicated to elite runners and impressive times of any marathon in the world—before and during this year’s race took on a decidedly different tone. Do not treat this as a “race,” we were told. Treat it as an “experience.”

Well, for me it was an experience I will never forget.