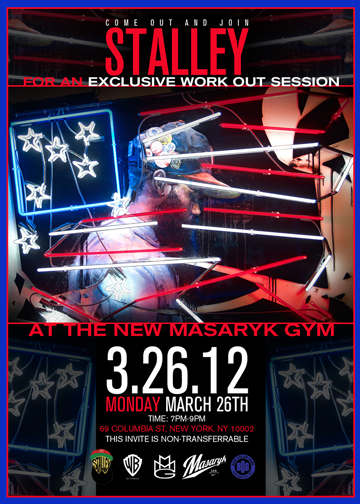 Even as someone fortunate enough to be a member of Nike’s Masaryk gym, getting invited there to work out and play with bubbling rapper and gifted ball player Stalley (who used to write for us) last Monday night was pretty exciting. And sure enough, blessed with some new Hyperfuses, some custom Stalley x Masaryk gear, and the sage advice of trainer Daryl “D-Trained” Smith, all of the gathered writers were well-prepared for a good run.

Stalley, a lean lead guard with a nice handle and a great jumper with range, set up his team to have the most complementary pieces possible (including XXL Magazine’s “combo forward” Adam Fleischer, another some-time SLAM writer), and his team won all five or six games played. But shit, he and his people sponsored the event, so who can be mad at him wanting to win?

Besides serving as a nice treat for media members that have rocked with Stalley in the past, the point of the evening was to raise awareness of the proud Ohio native’s new mixtape, Savage Journey to the American Dream, which dropped today.

Here’s the release from Warner Brothers Records on the project:

“It’s the most album-sounding project for me as far as the music goes,” says Stalley. “[People] are going to see the growth lyrically, musically, production-wise. There are definitely some surprises on there. But it’s still Stalley, it’s still that Intelligent Trunk Muzik vibe to it.”

Following his critically-acclaimed Lincoln Way Nights album in 2011, the former collegiate basketball player has been serving up an assortment of music in his Songs by Me, Stalley series to preface the release.

“The American Dream is something I’m still struggling to define,” reflects Stalley on the inspiration behind the mixtape’s title. “When I was younger, my dream was to be a professional basketball player as a way out of a small town. You hear stories about people leaving their town to follow their dreams and ‘make it.’ I wanted to make it. But for me, personally, my dreams shifted because injuries prevented me from becoming the athlete I wanted to be. Now my goals are totally different. I’m still in pursuit of the American Dream, and one day I’ll define it.”

You can (and should!) download the album right here.