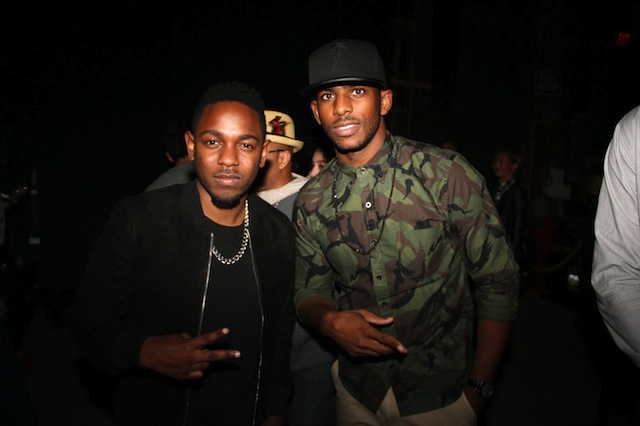 “We wanted a person that felt like an organic fit for the brand,” says founder David Raysse. “Jamal’s on and off-the-court persona is really cool and being that we’re a Los Angeles-based brand, Jamal was a perfect fit.”

About 300 people were in attendance at the launch event. The venue featured two sections filled with food, drinks, and music. A regulation basketball court was installed with a projected backdrop that read “A DIFFERENT WAY TO FLY”—one of the brand’s mottos. Members of the Venice Ball League (VBL) participated in a dunk contest during the event.

The BRANDBLACK Raptor—Crawford’s personal favorite shoe and the one he’s been playing with this season—was on display for the public to get a first-hand look before the shoe is set to release in February at select boutiques nationwide.

“The performance and aesthetics of the line is second to none. The minute I began to play in the shoes, I knew that I never wanted to wear another brand. The craftsmanship and overall design of the shoe was beyond my expectations,” Crawford said earlier in the day, when his partnership with BRANDBLACK was officially announced.

Fellow Lob City teammates Chris Paul and Blake Griffin, along with rapper Kendrick Lamar of TDE, were also in attendance.

During the event, Crawford came onto the stage where he a had a few words for the audience regarding his new brand:

“We’re doing big things. I’m happy to be apart of BRANDBLACK. I see this similar to when Allen [Iverson] signed to Reebok; it was different and cool. I couldn’t be more happy and we have big things in store.”

One of the big things in store is the announcement of Jamal Crawford’s “JCrossover” line, which will be releasing within the next couple months. The line will consist of different apparel as well as footwear that Crawford will be wearing during the annual NBA festivities (Fit Week, Noche Latina, Christmas, etc.).