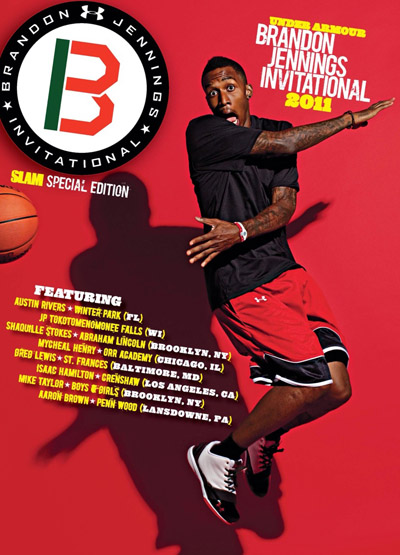 Greetings from frigid Milwaukee, where I’m covering the first-ever Under Armour Brandon Jennings Invitational. I’m excited to watch a nice mix of top programs and players from around the country, and feel especially connected to this event because we at SLAM actually made the program (you can see the cover in this post, and trust, it’s about the nicest 32-page program you’ll ever see—true SLAM collectors are going to have to find a way to get their hands on this thing).As we announced a couple weeks ago, the event is centered around a quadruple header that tips off at Marquette University High School today, Saturday the 22nd, at 11 am.

Last night I had a table set up at dinner and got the chance to sit with one or two top players from each of the participating teams. Please keep reading to learn the matchups and see what the kids had to say…

After a “busman’s holiday” at the Grizzlies-Bucks game tonight, I’ll get another big post up for tomorrow with recaps of all four Under Armour Brandon Jennings Invitational games.

For this cross-country matchup I spoke to a duo from each team: Penn Wood’s Aaron Brown (6-5 senior wing who is committed to West Virginia) and Shawn Oakman (6-9 senior PF who is committed to Penn State, where he’ll definitely play football and probabably hoop, too) and Crenshaw’s Daniel and Isaac Hamilton (a freshman and sophomore, respectively, Daniel and Isaac are both 6-5 guards and younger brothers of Texas star Jordan Hamilton).

SLAM: What are you guys hoping to get out of this trip, which is a little break from your local league games?

Aaron Brown: I think we’ve gotten a lot better as a team since starting a little slow, and we want to show the country that we’re better.

SLAM: Have you gone on many trips like this earlier this season?

AB: We’ve been to a few around Pennsylvania and the Chick Fil-A Classic in South Carolina.

SLAM: How does this event compare to the others?

Shawn Oakman: It’s good. There are some really good schools here and the competition should be tough.

SLAM: What’s it like to play against a team like Crenshaw, which is a famous program but that you know nothing about?

AB: It’s different, but we expect to come out and play at a high level.

SLAM: Some quick college talk with both of you guys…Aaron, what made West Virginia the choice for you?

AB: When I took my visit, everything was great: the coaches, the town, everything. They took me in and I loved it.

SLAM: Think my man Kevin Jones, who is in the new issue of SLAM, will stay?

SLAM: How about you, Shawn? Where has basketball fit in the whole college thing for you?

SO: Well, at Penn State they say I can do both as long as my grades are OK.

SLAM: Cool, so you’re definitely planning on it?

SO: Yeah. I talked to a few schools about playing both sports. Penn State was just the perfect fit.

SLAM: Not sure how many SLAM readers care, but me, as a college football fan, I gotta ask: What’s up with JoePa?!

SLAM: Why do you think basketball has struggled so much there compared to football?

SO: Football is just like the bigger brother to basketball. I think it’s like that at a lot of big schools, actually. We’re just going to try and bring the basketball up to that football level.

SLAM: Back to you, Aaron, I know you started out at Roman Catholic and played more of an inside game. Talk about the transition you’ve gone through at Penn Wood.

AB: My game has changed immensely. I went from playing power forward to the 2/3. I think to get to the next level, I’ll be able to have the inside game and the outside game, and be able to guard a lot of different positions. I think that will be great for me.

SLAM: So you guys came out here all the way from L.A. What do you hope to accomplish in this event?

Isaac Hamilton: It’s a national stage, and we want to play hard, play smart, play good, and show some new people what we can do.

SLAM: Have you played a lot of non-Cali games this year?

IH: Nah, this will be the biggest trip we take.

IH: Yeah, we do. We’re a little more used to it than other kids because of AAU and being around Jordan.

SLAM: Do you know much about this Penn-Wood team?

DH: Nope, just that they have a player committed to West Virginia.

SLAM: What’s that like, going up against a team you know nothing about?

IH: It’s not really different. Just like another day in the backyard. Just go at whoever we play. That’s what I try to do.

SLAM: How often do you talk to Jordan?

DH: We talk to him a couple times a week, and we text a lot…about the season, my grades, stuff like that.

SLAM: Obviously you’re going to have earn everything on your own, but do you feel like it’s a great resource to have a brother who has gone through all of this already?

DH: Yeah, I appreciate it. He set the tone for us.

SLAM: And that’s in basketball or off the court.

IH: Life general. And with his situation, how he couldn’t play his fifth year, he just tells us to keep our grades up and take heed of that. And now I’m in a great situation. My dad went to Crenshaw, my uncle went here, so we knew we were going to go to school here and keep Crenshaw on the map.

SLAM: Is it fair to say that Texas has an instant recruiting advantage for you guys?

SLAM: What are your goals for your high school career?

DH: I want to become one of the best players in California and make the next level, and then the next level. Hopefully one day there will be the three brothers in the NBA.

IH: I want to work on the same things. Keep getting better, keep getting stronger.

SLAM: Oh, and is going to college together a possibility?

IH: Yeah, my dad likes that idea and we talk about it everyday. Daniel isn’t just my little brother, he’s my best friend, so going to school with him is a joy.

To get ready for this Mid-Atlantic against Midwest game I sat with St. Frances’ Greg Lewis (6-8 senior F who has committed to Rutgers) and then Orr’s Mycheal Henry (6-6 wing who will attend Illinois next year.

SLAM: How does this event compare to some others you might have been to?

Greg Lewis: It’s Under Armour event, and we’re an Under Armour team, so we’re real excited. This is the biggest thing we’ve tournament in this year.

SLAM: Do you know anything about this Orr Academy from Chicago?

GL: Not much. We just need to come ready to play, whether we know them or not.

SLAM: How do you like playing for Mark Karcher?

GL: It’s fun, he’s a good coach. He’s almost more like a brother than a coach, since he played the game.

SLAM: Yeah, you young guys might not remember or know all this, but he and I are close in age and I remember him very well. Was one of the best players in the country in high school at St Frances and had a great college career at Temple, too.

GL: Right. I think we all know that stuff. He reminds us of it. Everyone on the team knows he was a great player. It’s always good to have a Baltimore guy leading our team. For me it’s great because I have a coach who went where I’m trying to go.

SLAM: Speaking of where you’re going, Rutgers is next. Speak on that decision.

GL: I chose Rutgers based on the opportunity. They’re in a rebuilding process and I think I can fit in with them well.

SLAM: Back to this season, what is your main goal before you finish your high school career?

GL: I want our team to win a state championship, a Catholic League championship and then go down to the Invitational for Catholic teams on the East Coast and win that, too.

SLAM: So, Mycheal, you didn’t travel as far as some of these other teams but this is still a change of pace for you guys, playing a team from Baltimore in the middle of your Chicago season. What do you look for in events like this?

Mycheal Henry: We want to come out and enjoy the experience, and get our chemistry together to take back home with us. We’re in a little slump so we need this game to get back on track.

SLAM: Why are you guys slumping?

MH: Offense hasn’t been flowing and we’re playing too much as individuals.

SLAM: Talk about your college choice for a minute. What was the key thing that made you choose Illinois?

MH: The key thing was closeness to my mom, so she could come to games, and the attachment I felt to the coaches and the players.

SLAM: There have been a lot of struggles over the last 10 years or so for Illinois to get Chicago kids. Do you feel like that should be an important link, that more of the top kids in Chicago are going to Illinois?

MH: I mean, it was my first option. I’m one of the first CPS players they’ve gotten in a long time, and that’s huge. Illinois is the choice I made and its right for me but I don’t want to say what other players should do.

SLAM: Lastly, give me one goal you’d like to accomplish before now and the end of this season, the end of your high school career.

MH: I’d like to be named “Mr. Basketball” for Illinois, and be named to the McDonald’s Game [laughs].