Brandon Jennings & Under Armour’s Impact on his Community 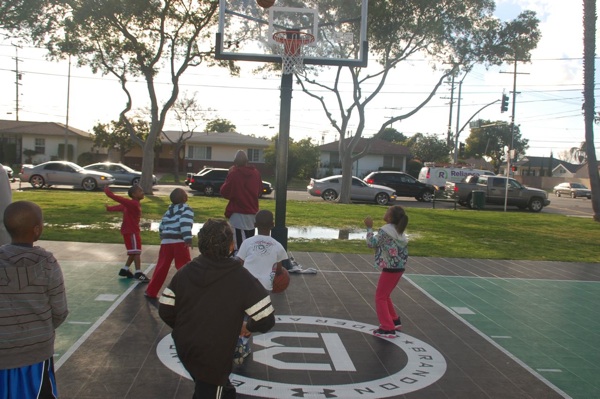 The impact of Milwaukee Bucks star Brandon Jennings and Under Armour’s service to the community has already become evident to anyone passing by Gardena, CA’s Rowley Park. Young ballers, aspiring ball players or even just those looking to get a quick run in have wasted little time in hooping on the brand-new, state-of-the-art rubber-surface basketball court Jennings and his shoe company had built last month.

The renovations have allowed kids of all ages to take advantage of one of the most lavish courts out there, which features “BJ3” logos and NBA-style hoops. As you may remember, we helped  break the news of this most generous endowment by Jennings and the good folks at Under Armour, and we also covered the park’s  makeover inauguration during NBA All-Star Weekend.

Just yesterday, we shared the news that Brandon was named by the NBA as the recipient of the NBA Cares Community Assist Award for the month of February. Obviously, Rowley Park’s renovation was a major factor, among other community, philanthropic and charitable deeds by Jennings. Below are some images that demonstrates the true testament of Jennings and UA’s mark on the community.

Keep up the good work, BJ!