A panel discussion on sneakers at Barnes and Noble in Union Square back in December helped raise funds for Brooklyn Democracy Academy. 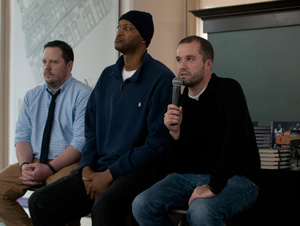 It is rare that you can buy a book, keep it for yourself and still have it positively impact another’s life. But this was the case December 17, 2014 with the SLAM Kicks: Basketball Sneakers that Changed the Game in-store event.

Held at NYC’s landmark Barnes and Nobles building in Union Square, the in-store author talk and panel discussion on sneakers was part of an initiative to raise funds for Brooklyn Democracy Academy (BDA), a transfer public high school for over-aged and under-credited students.

The conversation explored the impact of sneaker culture and its relationship to each panelist. Both Osborne and Whitaker explored their personal nostalgic aspect of sneakers. Be it Osborne scavenging along Fordham Blvd. in the Bronx looking for Converse Weapons or Lang’s waiting at the Atlanta airport to ask Dominique Wilkins (and other Hawks) for his game-worn kicks, the effects of sneakers on these men go well beyond commerce.

Wallace, who had his own signature line of sneakers with Karl Kani, shared his parental and professional reflections in regard to manufacturing companies’ fiscal, community, and societal responsibilities. “I now wear American-made New Balance and will not buy my children anything too expensive such as Jordan Sneakers.” His concerns include the values and messages being expressed through price gouging and the continual flow of new product. Interestingly enough, Osborne added that the burgeoning socks market with responsibility-minded companies such as Stance, may put less emphasis on continually getting the newest and most expensive sneaker. Socks are now gaining cool street credibility but are also considerably more affordable.

Underlining the youth culture-education nexus in the Q+A segment of the session, BDA principal, Andrew Brown, remarked, “We have been able to use basketball as a way keep our young men and women occupied with positive activities after school, and as a means to keep students dedicated to earning a diploma.” Proving him right, present amongst the audience were the BDA boys and girls basketball teams, cheerleaders, students and their kicks.

Crystal Lan is a freelance writer specializing in the media’s role within theology. Her work can be found in SLAM and The New York Times.