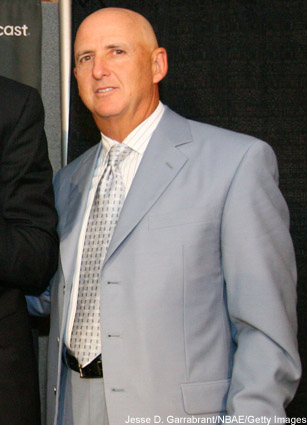 Evan Turner has arrived at his first commercial shoot and he has yet to see the cool set. He’s busy staring at a food truck outside.

“Will this be here all day? With food?”

His agent David Falk laughs. Falk tells him the truck will be at his service throughout the day.

Turner is here for a commercial and print shoot for his shoe and apparel endorser, Li-Ning. The Chinese athletic company is hoping Turner can help introduce their product to the US market. It’s a creative and unique deal that both Turner and Falk are extremely excited about. While Falk and Turner sit at the back
of an open moving truck enjoying some breakfast, a crispy black Maybach rolls through the lot in slow motion. Will Smith.

“Aren’t you supposed to have someone driving you in that kind of car,” Evan jokes.

He mentions something about wanting to meet Smith who is here to shoot a music video with Will.I.am next door. Falk knows him—no surprise. He walks over to the Maybach as Smith gets out. Within a minute, Falk and Smith start walking back toward the truck. Evan gets up and meets them halfway. Falk smiles as he makes the introduction.

I had no idea Falk was going to be in attendance. Earlier that morning, I arrived at the W in West Hollywood to meet Turner and Li-Ning Director of Brand Initiative for Basketball, Brian Cupps. It was mid September and the hotel was a complete zoo. Entourage was set to shoot on location later in the day, so I arrived as cars and crews blitzed the venue. Falk came to support and overlook the production for his talented rookie client.

I was here to work on a piece for the magazine on Turner and his relationship with Li-Ning. When Falk and I met, he immediately took notice of my attire and gave me some shit—rocking an adidas Muhammad Ali track jacket wasn’t a smooth move. Falk told me that if I was here to see MJ, he would refuse to speak with me if I showed up in a competitor’s gear.

I knew he was right. I made the mistake of rocking a pair of Chuck Taylor’s when I met up with Allen Iverson five years ago for the cover of Kicks 8. AI could not believe that I had come to see him in my “flat-ass Converse.” Dude was witty as hell. And like Iverson, Falk wasn’t being mean about it. He was teaching.

On the set, I sat and conversed with Falk while Evan did his work. We spoke for hours. I found him to be brilliant in many ways and very open and willing to discuss any topic I brought up. I have always viewed him as the most impressive agent in the history of the game. His record speaks for itself.

But what I found in my discussions with him is that David Falk is not an agent. He’s a creative. He has ideas, concepts—a vision. And his experience in the game is unrivaled. After a few hours passed, I asked if I could record our discussions. Falk agreed. I decided to break up our Q + A into two parts. In part one, I focused on some of the hot topics from the offseason: LeBron and The Decision, ongoing CBA talks and of course, Worldwide Wes.

SLAM: Mark Cuban came out and said LeBron James lost $1 billion in brand equity by participating in The Decision and making his exit in the manner he did. Do you agree?

David Falk: I think in the short term he has lost a lot of brand equity. I’m a big LeBron fan. The challenge will be to build it back. I’m not sure he has $1 billion worth of brand equity in his brand, so I think that’s probably a little bit of an exaggeration.

SLAM: Were you surprised at the level of anger from fans and comments from people within the League following his decision?

DF: I wasn’t surprised at all. I was disappointed that it wasn’t handled better. I really like Maverick Carter. Maverick is not his NBA agent. In any situation when you’re going to exit, I think you have to stand up and tell the person in advance, ‘Hey, I’ve made a decision. You haven’t created an environment that is conducive to my success, so I’m going to leave.’ He has every right to leave. I just think there’s a certain level of respect, consideration and professionalism. And LeBron is a very professional guy and I don’t think he received very good advice in how to handle that situation. I think the show was a disaster.

SLAM: But everyone watched it.

DF: Everyone involved in the show, from Jim Grey, to the agencies that created it, to LeBron — everyone came away with a black eye. You do the thing first, and then you talk about it. When reporters call me and ask me ‘Is Jeff Green going to re-sign in Oklahoma? Is Roy Hibbert going to sign an extension?’ I tell them to stay tuned. Let me do my job and when it’s done we can talk about why we decided to do what we did. If LeBron had gone to Miami and then did a show and said he didn’t think he could win in Cleveland and wanted to be with his buddy DWade— be Batman and Robin like Michael and Scottie, that would all be cool. To do it simultaneously is a little too modern, a little too social media. You lose the flavor. This is basketball. This is not television. We’re not talking about why you’re taking a role in one movie as opposed to a role in another movie. It’s basketball.

SLAM: It was a crazy time. Reporters angling for scoops, rumors by the hour on Twitter—

DF: But it wasn’t really news. Everyone I knew told me a month before that he was going to Miami. It wasn’t a surprise. What I think is interesting and the League will have to deal with this with the next agreement whether they choose to or not. This situation with Carmelo. He sees those guys teaming up, now he wants to team up, whether it’s with Chris Paul or Amar’e. I actually tried to do that in my own day in my own way, but I never did it publicly.

SLAM: What can you tell me about Worldwide Wes?

DF: I’ve known him since 1986. I really like him. He’s a fun guy. He has great talent in brokering relationships. I think he’s probably better under the radar than in the radar. I think he knows that. I think the job he just took puts him more in the spotlight.

SLAM: For a long time, many were unsure of his role in the basketball world. I know you’ve said that he is someone the players trust.