Elena Delle Donne's lived up to the hype on the court. Off it, her incredible journey has inspired fans for years. Now she and Nike are telling the next chapter of her story. 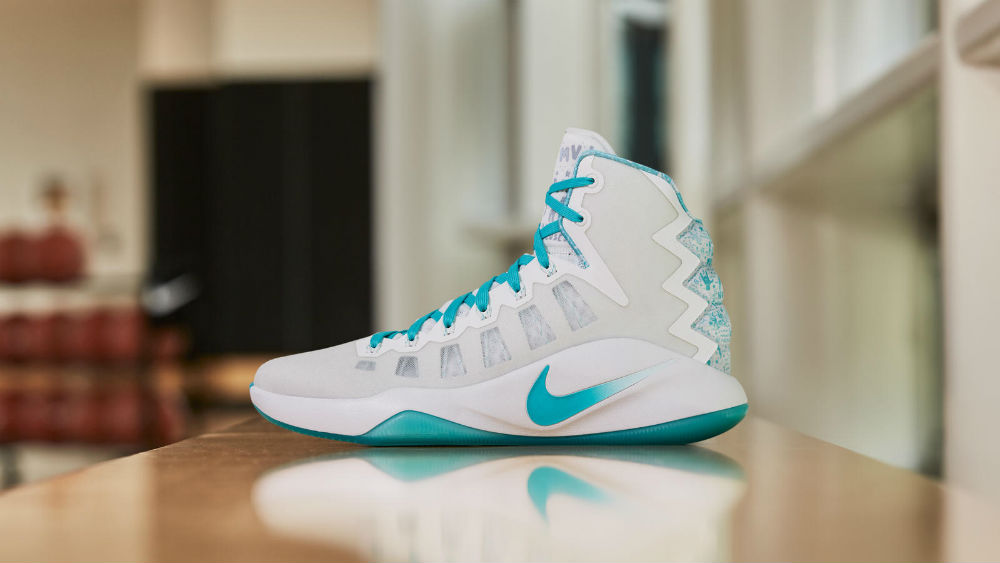 Back in 2008, Elena Delle Donne, the nation’s best high school player, was all set to become the latest UConn superstar. But she decided against becoming a Husky and started on her own journey, one that she’s shared with all of us for years. That journey eventually led to a WNBA MVP award, an Olympic Gold Medal and her own Nike PE.

“The Path Less Traveled,” which appears on her Hyperdunks and is a nod to EDD’s decision to skipping out on UConn, has become one of Delle Donne’s mantras. It’s one of 15 individual designs that appear on her new sneaker that also includes waves, representing her love for water and the clouds that are a nod to the Chicago Sky. She’s the second W player to get her own PE, but she’s become one of the faces of Nike Basketball, popping up at all types of Swoosh-related events and in Nike commercials and short films.

This past season, Delle Donne averaged 21 and 7 before going down with a season-ending thumb injury in September. During the Olympics, she averaged 8 points, 3 rebounds and 3 assists off the bench, playing much better than her stats suggest.

We caught up with the MVP to talk about her new Hyperdunk PEs, which are out now.

SLAM: We’ve seen you in lots of sneakers throughout your career. Zoom Soldiers, HyperRevs, Flyknit Hyperdunks, even that crazy pair of Kyrie 2s. Why’d you pick the 2016 Hyperdunk as your PE sneaker?

Elena Delle Donne: It really suits my game. I’ve played in both the highs, the lows. Even though it looks pretty high, it still has a low feel to it. I love the way it wraps around my foot. It just feels great. I love these shoes. I’ve been asking a lot of people who have been wearing them what they think about them and they’ve been loving them, too. Just a great shoe.

SLAM: There’s a lot going on with the sneaker and all the designs have their specific meanings. Who came up with the art?

EDD: One of the awesome Nike designers (laughs). I was able to spend some time with some of the shoe gurus of Nike and just sit down and talk to them about colors and styles that I like. I was just telling them about my basketball journey and my life and they came up with this awesome design. I couldn’t even believe it when I saw it.

SLAM: Nike’s famous for how much input their athletes get for PEs or signature lines. Was there anything that surprised you during the design process?

EDD: I wasn’t surprised because I know Nike’s great. They want this to be really important to us, the athlete, and we’re able to drive the ship. For me, it was just special to sit down and see the input they let me have and let me steer the ship. Then they would just throw out ideas, see what I thought about it and would go from there.

SLAM: You’ve always shared your story with the world, but never through a sneaker. Did you find any differences in telling a narrative through a pair of kicks?

EDD: It was definitely different. I had no idea how it was going to come together on a shoe. As I was having certain conversations, they’d throw out ideas. Like, having some of these details raised because my sister’s blind and touch is so important. She’d be able to feel the shoe and feel these details. They knew the importance of my tattoo and putting that inside of the shoe but making it pink because we’ve always said that Lizzie’s favorite color is pink. That was what was so cool, was seeing how they were going to put these ideas on to a shoe.

SLAM: There’s an interview where you said the Air Swoopes had you freaking out when you were a kid. Were there any other sneakers that you also had to have?

EDD: That was definitely the biggest. I had wanted to wear a female shoe for as long as I can remember. So when that came out, I was probably the most obnoxious kid to my mom and my dad, just whining to get out there and get that shoe. Then the second I got the shoe, they couldn’t get me inside because I was outside playing so much. I remember the importance of that moment in my young career. If I can have an impact like that on just one child, that would be incredible, because I remember it still to this day.

SLAM: So when you see some kid rocking your sneaker, you’re gonna freak out, right?

EDD: Oh, of course (laughs). I’m gonna freak out probably even more. I’ll be taking pictures with them, shooting around with them. I can’t wait to see it on people, I think that’s gonna be the most amazing part of this whole process and there have been a lot of awesome moments.

SLAM: Next season’s still a few months down the line, but are we gonna see you taking the court in these?

EDD: Definitely. This is by far my favorite shoe.