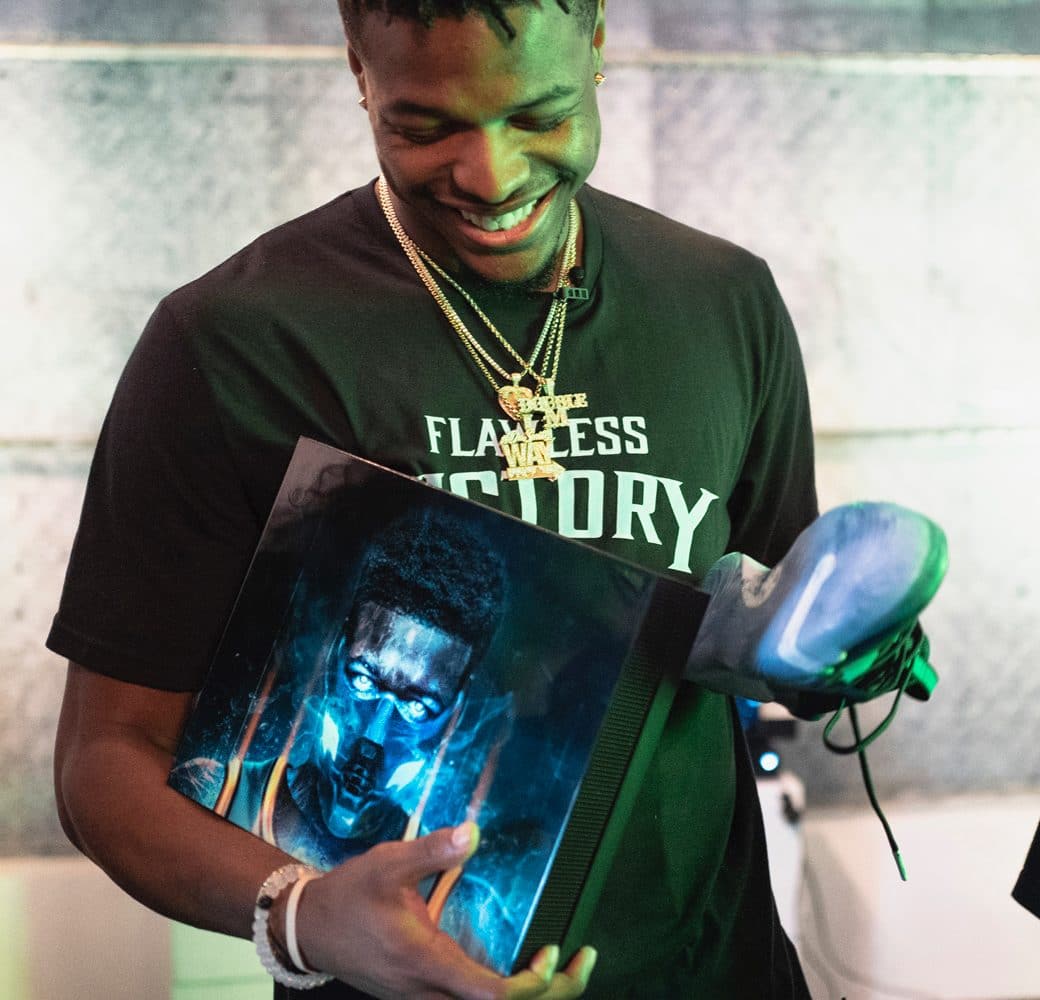 Dennis Smith Jr’s love for Mortal Kombat began at a young age. Growing up in North Carolina, he remembers the many Sub-Zero-versus-Scorpion battles against his cousins on the sticks.

Now, at 21, Under Armour has helped to bring back that nostalgia, creating a Sub-Zero-themed Anatomix Spawn to commemorate Smith’s love for his favorite character and the recent release of Mortal Kombat 11.

Smith Jr stopped by the LA-based boutique BAIT for Fight Klub, a pop-up to celebrate the drop of the sneakers and game. We caught up with the New York Knicks point guard to talk about the UA x Sub-Zero concept, playing Mortal Kombat and more.

SLAM: How did this whole Sub-Zero Anatomix Spawn concept come to life?

Dennis Smith Jr: We came up with the idea of the shoe in Las Vegas during Summer League when they released the HOVR Havoc. They showed me that shoe for Summer League and I seen it—it was dope. I just ran an idea about them with my move—the hesitation is like the Sub-Zero—that’s what we call it. It freezes people. I was just telling them the idea that it would be dope if we came up with the shoe that went together with Sub-Zero. That was what laid the foundation for the shoe and they came up with the design and it came out good.

SLAM: What were your thoughts when you first saw the shoe?

DSJ: I liked them and thought it was dope. Y’all been doing a lot helping me promote it as well with SLAM Kicks. The reviews have been great. A lot of players and a lot people locally have been showing me a lot of love. I think it’s a great look.

SLAM: The Anatomix Spawn is one of many Under Armour shoes you’ve worn since being in the League. Where does it rank among your favorite hoop kicks?

DSJ: These number one in terms of comfort, how they look and stability.

SLAM: What is it about Sub-Zero that makes him your favorite character in Mortal Kombat?

DSJ: I grew up playing with game with my cousins and most of them like Scorpion. We always viewed Sub-Zero-Scorpion like Duke-UNC—how they were rivals—and I started liking Sub-Zero. It started at probably 4, 5 years old.

SLAM: You got a couple reps in with MK11. What were your overall thoughts?

DSJ: It’s kind of hard to play [laughs]. The controls is different, but I could tell when I get used to it it’s going to be a good game. I’m going to catch a lot of Ws in it. That’s for sure.

SLAM: Is this a game you can see playing against some of your teammates or other NBA gamers?

DSJ: Maybe, if I find other people that play Mortal Kombat. There’s a lot of people that been feeling the shoe and been giving positive reviews on it, so I might be able to find a couple people to play me.

SLAM: If you were to be put in Mortal Kombat, what would your name be?

DSJ: Jung Lao [laughs]. His name is Kung Lao and I’d be Joon Lao. See what I did there?

DSJ: I want the same kind of gear like Sub-Zero, Scorpion and Reptile be wearing—the little suits, but mine is going to be red.

SLAM: What would your fatality be?

SLAM: You have a costume that’s mixed with Sub-Zero, Scorpion and Reptile—all-red. Are you on the air or on the ground?

DSJ: I want it to be on the ground. I can’t take Sub-Zero’s because I want to be faster than everybody and be like the Flash of the Mortal Kombat world. I think that’d be dope.

Photos courtesy of Under Armour.