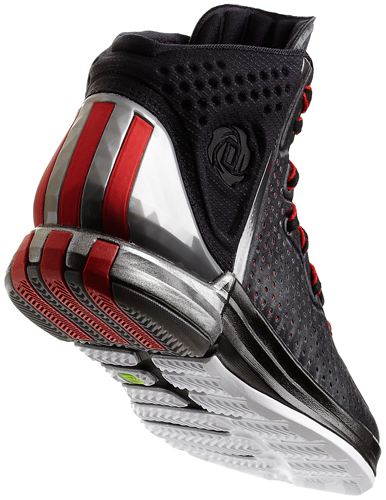 It’s no secret that Derrick Rose maintains two distinctly different personas. Off the court he’s a calm, shy guy with a quiet voice and a perpetually laid-back disposition; on the hardwood, he’s all aggression and ferocity, exemplified by an endless supply of forceful drives to the basket and two-handed in-your-face hammer dunks. This juxtaposition is exactly what the folks at adidas used as inspiration for the D Rose 4, the latest iteration of Rose’s signature sneaker line.

The front of the kicks are subtle, maintaining a single pattern of small dots, but a vertical stripe separates the front from the back of the sneaks, with the heel featuring a variety of designs: the D Rose logo, SPRINTFRAME with a sleek, pearlized finish and the signature adidas Three Stripes along the back of the shoes, placed there so opponents can see them as Rose breezes past and elevates toward the hoop. “It’s kind of like my personality into one shoe,” Rose told reporters at the unveiling of the D Rose 4 in Chicago last week. “The front of it is clean. You can wear it with anything. The back is kind of crazy. It’s just like me on the court. I play aggressive, so for them to put both sides of my personality into the shoe, I think that’s what makes the shoe special.”

“[Derrick] wants his fans to have a chance to wear the shoe on-court, so they have the best innovation, but also to be able to wear it to the malls [and] clubs,” says Lawrence Norman, adidas’ VP of Global Basketball. “He’s like, If they can’t buy two shoes, then I want to give them the opportunity to wear one in all of these situations. We took it from there, so it’s gotta be the best of adidas’ innovations but also able to go with jeans and to have all rich materials.”

According to Rose, the D Rose 4s are a huge improvement from the 3s and those that preceded it. “I think this year’s version, the D Rose 4, definitely is superior [to the D Rose 3],” SLAM 172’s cover star told us. “I think that the way that they made it, technology-wise, it’s more stable. The stability is way, way better. The front of the shoe is a little bit different—it’s really like a basketball shoe, performance-wise, like you won’t roll your ankle or anything.”

The kicks also feature an oversized tongue—made of synthetic leather—along with the Crazyquick outsole traction system, which includes a forefoot with two-way flex zones for better court feel. They’ll be released in a total of eight colorways and will drop on October 10, retailing for a price of $140.

“When I first signed my contract I didn’t have a shoe at all,” Rose says, reminiscing a bit. “I was still playing to get a shoe. Now I’m in that position where I’ve got my shoe, got my logo, got my collection. I’ve just gotta keep it going.”