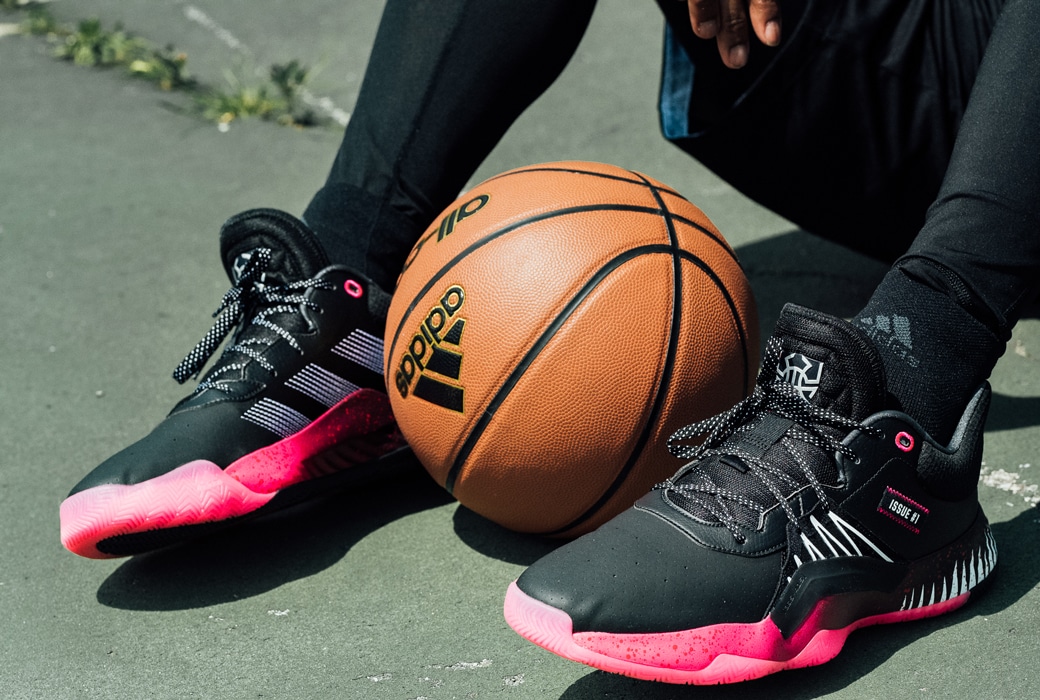 To make the sneaker he envisioned, it needed to encompass his full story.

So over dinner in Portland, OR, one night, with an audience that included his mother Nicole and several members of the adidas team, Donovan Mitchell told that story.

He spoke of a childhood filled with adversity, although some of it only became known to him later on. Nicole worked tirelessly to pay bills and keep food on the table, hiding many of the family’s obstacles from her kids. Despite the hardship, she drove Donovan to every AAU tournament and fostered his passion for the game.

He described a dream that developed early on, but that no one truly believed was attainable. Not even Nicole. At times, not even himself.

He reminisced on the many people who assured him he couldn’t do this or that or wouldn’t make it as far as he has. And the few instances when, though brief, he thought the same thing.

Overall, however, the 23-year-old Mitchell explained how he overcame the barriers and cynicism, how he persevered to make it to this moment, on the brink of releasing his own signature sneaker.

Rashad Williams, the Senior Director of Footwear for adidas Basketball, listened intently to Donovan’s words. Each chapter of his journey had a similar theme. There was the time Mitchell broke his wrist playing baseball and missed a crucial summer of basketball for recruitment, only to return and start killing everyone on the court and move up the rankings. Or when, amid a difficult freshman season at Louisville, he would break down in his dorm room and even contemplated quitting the sport he loved, only to spend late nights in the gym honing his craft.

All the while, there was the constant chatter about him on social media and the internet, asserting he simply wasn’t good enough to achieve his ultimate goal.

It was Determination Over Negativity (D.O.N.) that got him to the NBA, never giving up on his dream even when doubt engulfed it. Doubt from everyone.

By the end of that dinner, the group had established a good foundation for Mitchell’s signature. The message would be right in the name. The D.O.N. Issue #1.

“Determination Over Negativity is a belief that anything is possible no matter who you are or where you come from,” said Mitchell, via press release. “I wanted this sneaker to be a symbol of that—for the kid who believes they can do anything.”

Then, of course, there was the design. It was established early on in the process that the sneaker would incorporate Donovan’s nickname: Spida. A former teammate’s dad came up with it when Mitchell was a kid and it caught on.

Mitchell’s tremendous wingspan (6-10) allows him to be disruptive in passing lanes and reach for rebounds (sometimes absurd put-backs) among the trees. He glides effortlessly to the basket and soars through the air with ease, as if swinging between buildings like Spider-Man.

Partnering with Marvel, adidas went on to announce four superhero colorways of Mitchell’s sneaker. The main one (“The Amazing Spider-Man”) is red, white and blue and features web stitching on the toe box and tongue. There’s a “Symbiote Spider-Man” colorway (also known as “Venom”), which is pink, black, white and silver with teeth patterns across the midsole. The “Steal Spider-Man” has glow in the dark details and there’s the red and gold “Iron Spider” as well.

Throughout Mitchell’s incredible rise in Utah, which has included a Slam Dunk Contest title, a pair of trips to the playoffs and two-year averages of 22.1 points, 3.9 assists and 3.9 rebounds, the young guard has had Dame 4s and the Pro Bounce 2018 Low on his feet. The Dame 4 helped serve as a base for the D.O.N. Issue #1.

“The main two areas Donovan wanted to focus on were a nice, soft upper—similar to what he wore in the Dame 4—and then having some great traction, based off his game,” says Williams. “He prides himself on being a two-way player and those are the first two areas we focused on.”

Mitchell was heavily involved in the design process. Each new idea was brought to him for approval or rejection. Numbers printed along the side reflect his standing and running vertical leaps at the NBA Combine. Additional “coding” hidden on the shoe pinpoints the key locations along Mitchell’s journey, including Brewster Academy, where he finished his high school career.

One of his specific requests was that the toe be soft and pliable to enhance comfort. He also wanted Bounce foam in the midsole, another quality of the Dame 4, to support his athleticism. Other elements were added to ensure the sneaker was compatible to Mitchell’s high-flying style.

“Donovan is a special type of basketball player who exerts extreme forces on his footwear when moving during a game,” says Jimi Taylor, Senior Footwear Designer for adidas Basketball. “In particular, he generates peak force when he jumps and lands by angling his feet to side propel himself upward. We obsessed over this detail in his game and built a shoe that has a wide stable base for launching and landing with layered reinforcement in the forefoot to provide lateral stability without limiting movement.”

“The shoe really focuses on Don’s style of play,” Williams adds. “He starts and stops very hard and explodes at a tremendous force.”

As Donovan has quickly assumed a go-to role on the Jazz, a team with its sights set on a deep postseason run, the dynamics of the silhouette had to change. According to Taylor, it was built for the long haul.

“One of the things that struck us immediately in the design team was the amount of work that Donovan was doing for his team so early in his career,” he says. “With the major minutes and responsibility he was carrying, we worked to create a shoe that was as comfortable as possible, to allow Donovan to push as hard as possible all season long and into the playoffs. We did this by creating a really comfortable tongue and collar with focused zones of extra padding. We also gave him a really plush Bounce tooling that would help absorb the beating his legs were taking but without sacrificing his natural feel for the court.”

Beyond its performance and functionality, it was important to Mitchell that the sneaker be accessible. He made that very clear to Rashad, Jimi and the rest of the team working on it. It needed to be affordable.

Growing up, Mitchell often lacked the money to buy the pairs he desperately coveted. That stuck with him over the years. With a retail price of $100, far cheaper than most options on the market, the D.O.N. Issue #1 will hopefully not present that problem.

When he stops to consider where he’s at now, how far he’s come and what he’s managed to accomplish, Mitchell is still taken aback. He’s played merely two seasons in the NBA and already made a big enough splash to warrant a signature sneaker. On most nights, he takes the floor with the same guys he idolized, people he used to watch on TV and read about in magazines.

The experience of creating something for individuals who now look up to him was surreal for Mitchell.

“He constantly says he can’t believe it,” Williams explains, when asked about Donovan’s reaction to the sneaker. “He’s very excited, that’s one thing I love about Don. Anytime I’m with him, he gives off a tremendous amount of energy. And you feel that energy and you feel that authenticity. Him having a signature shoe—anytime you hear him talk about it or you see him with it, that authenticity, that excitement, is always there.

GRAB YOUR COPY OF KICKS 22

Photos via adidas and Getty Images.