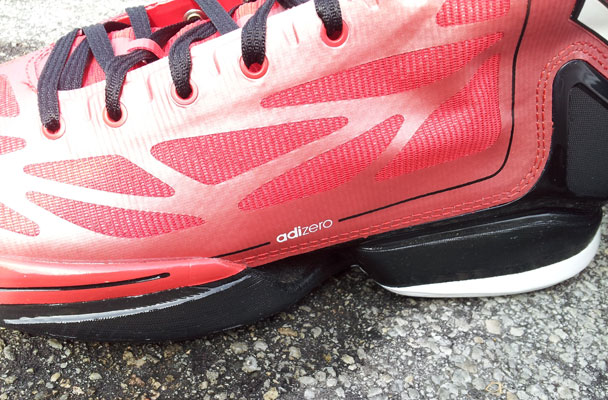 That was the mantra as the adidas adizero Crazy Light 2 came on the scene this past May, exploding on the hardwood NCAA courts during the March Madness tournaments—bright colors on high-top basketball shoes, weighing not much more than half a pound.

The look of the adizero Crazy Light 2 is simply electric, but it is encompasses an idea that makes it even more relevant—the idea that a shoe can be substantial in performance and achieve a featherweight feel is powerful in a sport where feeling is a sign of quality. Fortunately, I was able to secure a pair of the adizero Crazy Light 2 and generate some early impressions of the shoe.

As can be seen from the gallery, the adizero Crazy Light 2 is a technical shoe that possesses a lot of pizzazz. The lines are dynamic and sharp, the angles are drastic and winding, and the stance of the sneaker is aggressive. It’s a shoe that has a lot of character, aesthetically, but its gold is in its performance benefits.

One of the issues that I had with the first adizero Crazy Light was that it was too yielding in fit; for a player who has narrow feet, like me, the initial introduction of the shoe was a slight disappointment, because I wasn’t able to keep my feet from sliding and shifting. In the second version of the adizero Crazy Light, there is no such issue—in fact, it more than makes up for its initial forgiving fit.

The adizero Crazy Light 2 is very stiff, both in the last and in the upper; it was too stiff for me in my first wears. Where the first adizero Crazy Light was wide and had a bigger mesh weave, the second version fits close to the foot and use a much tighter weave of adidas’ patented ‘zero’ mesh, which is open-cell textile mesh for supreme breathability. The last is heavily contoured and the make of the shoe is rigid in construction, making the adizero Crazy Light 2 unadaptable for some foot types.

For years, I was a men’s 10.5, but as people started getting bigger in the late 1990s and early 2000s, many of the shoe companies adjusted their fits about a half size bigger, and thus, I later shifted to a men’s 10—in the case of the adizero Crazy Light 2, it is suggested that you go a half-size up, as I had to do, which greatly changed my impression of the shoe for the better.

Having said all of that, I don’t feel that the adizero Crazy Light 2 is perfect, but it has a great build that makes it a winner in many respects. I feel that the comfort level of the shoe could be improved, and as I’ve complained about with the adizero Rose series (and this is essentially a Derrick Rose non-signature shoe), the inclusion of adiPRENE would greatly help the cushioning aspect of the sneaker. As great as the SprintFrame is for torsional rigidity (something that I’ve found that I need to keep my own feet healthy), its rigidity makes even the premium-sourced cushioning of the shoe nullified—I’m pretty confident that adiPRENE would give it more pop.

Secondly, as I prefaced, the adizero Crazy Light 2 is so heavily contoured, it eliminates some players from wearing because of its more discriminatory fit; it’s not a bad thing, per se, but some feet will fit better in the shoe than others (specifically, curvier feet will do better).

All in all, the adizero Crazy Light 2 has the makings for a dynamic court shoe. The durability and lockdown of the shoe’s SprintWeb upper, the torsional support of the SprintFrame, and it only being 9.5 ounces of shoe makes it a winner, even it isn’t perfect—and honestly, it doesn’t have to be perfect, it just has to be good enough, and the adizero Crazy Light 2 well above “good enough.” Just size up when you buy.

Sandy Dover is a feature writer and published author, multi-platform consultant, and a SLAM web columnist & print contributor whose work has been prominently featured and published by US News, Robert Atwan’s “America Now”, Yahoo!, ESPN, and STACK. You can find Sandy frequently here at SLAMonline and contact him via his website at about.me/SandyDover.