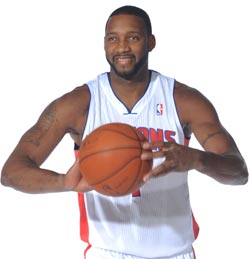 SLAM reporter, Eric Woodyard gives viewers a glimpse of what it’s like in Auburn Hills, MI as the Detroit Pistons host their annual “Media Day” on Monday, September 27, 2010. Woodyard interviews Tracy McGrady and Rip Hamilton on their shoes for this season, Ben Gordon on his offseason, and Will Bynum on his growth as a player.