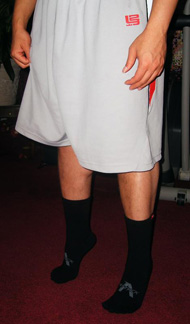 When I was first given the opportunity to wear-test a new product, I was told it was in connection with the famed trainer Tim Grover, who many know for his legendary work with Michael Jordan in the late 1980s through the end of his career. Needless to say, I was excited, and that the product would be a revolutionary new performance sock, I was excited–really, I was. Though I had never hea

rd of the Southern California-based Injinji sportswear company, I was extremely optimistic about using the product. After all, reviewing sportswear and footwear only makes sense for a guy who’s been following new foams, leathers and outsoles since the age of 12. I was happy.

And so I chopped it up with Grover and the president of Injinji, Jason Battenfield, who were both enthusiastic about the opportunity to pass on their baby to someone who had the chance to review. I learned from the 25-minute conversation that I had with them that the XR Performance Toesock was something that originated in Injinji’s running division, but seeing as to how Grover has had a relationship with the company and always looking for an edge in training methods, the crossover of the XR was seemingly natural.

As was explained by Tim and Jason, the Xtreme Revitalization Toesock is a post-workout/post-game sock that operates to really keep the foot from suffering any tragedies after hardcore activity. Anyone who has played the game of basketball and played for a few consecutive games knows that your feet can be a mess afterward, and because of the brutal nature of the foot’s activity, the XR Toesock is for the revitalization of the foot (a part of the body which is considered “the second heart” in some Asian cultures). According to the Injinji packaging, it “revitalizes after intense training,” “fuels circulation,” “supports and aligns,” “boosts breathability,” “helps prevents blisters & hotspots (and) athlete’s foot, bacteria & odor.” Now normally, I know for a fact that consumers looking at the attributes of purchased products have certain amounts of skepticism…or BS detectors, in other words; what I choose to acknowledge is that the sock, more or less, lived up to its billing–it was a positive experience for me.

(I was also told that Gilbert Arenas and Dwyane Wade specifically had been wearing the socks during the offseason workouts at Grover’s Attack Athletics facility in Chicago as well, so my sharing this exclusive experience was a personal delight.)

Because I wanted to see what they could do for real, I tested the Toesocks after a high-intensity walk/run cardio session the first time–this was probably the most important session because I was able to introduce the product to my body without having had any prior experiences with anything comparable. After the 35-minute session, I took a shower and then slipped my feet through the tall black crew XRs–by the way, the Toesocks are especially important because the individual toe digits are distinguished for your own toes (!)–as soon as the fabric grabbed in-between the space

s of my digits, my brain literally felt tingly. It was as if my nerve endings from the spaces of my toes’ digits were connecting. It was an ecstatic feeling, a good feeling, and it felt unreal, honestly. It was if I was lightheaded, and I actually had to find my balance, but after a while, I felt great. I walked around the house in them the first time for a number of hours, and while I could tell my circulation was changing in my digits, it was not anything that seemed dangerous; rather, it seem as if the Toesocks were re-calibrating my senses of my feet altogether.

I tested several other times, with both the crew and mini-crew sock versions with really consistent results. My circulation was definitely fueled, as I described above; my feet felt supported as well, but not too much different from a regular cotton sock, but it was a subtle feeling, which was positive; that the XRs are made of 70 percent CoolMax fabric (a moisture-wicking synthetic material often used in athletic socks, underwear and other base-layer/second skin sportswear) enabled an incredible amount of just-right dryness, that also was very noticeable in how it acted with my feet when they made contact with the floor–there was no odor, no sweat buildup of any kind, and I didn’t really have any hotspots, with absolutely no blistering, to boot. The XR Toesocks are the real deal.

My only criticism of the XR is that the crew-length sock didn’t seem to have as much grip to my foot as I would’ve liked. In that sense, I was only mildly disappointed by the overall support, and I think that there being only 5 percent Lycra spandex in the sock, coupled with the other 95 percent composition of the socks’ synthetic makeup, was the reason for a somewhat incomplete second skin feel. In an intended follow-up (complete with an exclusive interview or two), I will soon be testing other length and color variations of the Toesock in the near future. After washing, the crew sock tightened up a bit, so that was nice. The mini-crew I also tested was great as well, and while I also desired more hold onto my feet, it was noticeably better in it shorter form.

In all, after various wearings, from cardio workouts to pre-workout wears, I give the Injinji XR Toesock by Tim Grover a stamp of approval. The complexities of the product prevent me from nailing it down with a letter grade, but it provides a good experience, especially for those on their feet for tremendous hours of time, be it work- or fitness-

related. It’s a good sock to use when you’re lacking some variation in your sock game, and it’s refreshing to wear a sock that’s so refreshing. While it’s not a “kick-in-the-head” sort of experience after your first few wearings or so, the subtleties in the technologies of the socks are such that your comfort is heightened, and bottom line, the XR delivers on results.

It can be purchased via Eastbay now and for more information, visit Attack Athletics and Injinji at their respective sites.

(A special thanks to Ryne Nelson, Jordan Jerkovich and Ryan and Jan at Injinji for the coordination of this test review.)

Sandy Dover is a novelist/writer, artist, fitness enthusiast, as well as an unrepentant Prince fan (for real). You can find Sandy frequently here at SLAMonline, as well as at Associated Content and Twitter.