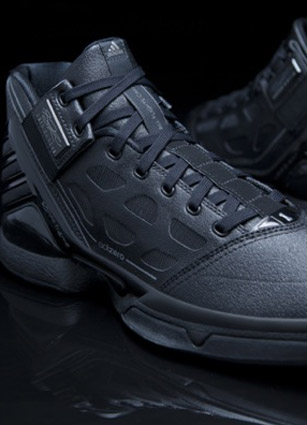 Derrick Rose is that dude. And yet, the L’s youngest-ever MVP isn’t on vacation this summer, sipping a pina colada somewhere in the sun. Nah, he’s at home, rebuilding asphalt courts and sharing his shine with the fans who love him most.

Saturday, October 15 in Chicago, fans that followed “Run with DRose” on the adidas Basketball Facebook page had the chance to watch and—for the luckiest ones—even play a casual pick-up game. Now, in honor of his dedication to the people of his home town, adidas is releasing a black-on-black-on-black colorway of his adiZero Rose 2.0. The details, courtesy of our friends at adidas:

To continue the Chi-Town love, adidas will drop a Triple Black version of the adiZero Rose 2 on November 10 at Foot Locker, Eastbay, and shopadidas.com. The shoe features thick, sturdy materials to represent the outdoor courts and street style of Derrick’s home turf of Murray Park in the Englewood neighborhood of Chicago. It has a rough, pumice finish to rep the concrete and asphalt courts, as well as D-Rose’s explosive play. Stay tuned to the adidas Basketball Facebook page for the exclusive, first opportunity to buy the shoes next week before the official launch.

But that’s not all.

We’re giving away three (3!) exclusive autographed adiZero Rose 2.0s, in the original red/black/white colorway (second pic in the gallery). Yes, that means the MVP himself offered his sig—a rare slice of history and a crazy cool piece of memorabilia. Want to win one? “Like” adidas Basketball on Facebook, and submit your answer to the following prompt in the comments section below:

The new adiZero Rose 2 colorway is built to reflect DRose’s “home turf.” Tell us—in 100 words or less—about your home turf. The place where you made a name for yourself growing up, honed your skills, played pick-up games every day after school or shot jumpers until the lights went out. Where is it? What’s special about it? What happened there? Why is it your home turf? Be original, be creative, be entertaining. And, of course, be real. The three best entries will be sent the auto’d Roses, courtesy of adidas and SLAM.

Winners will be announced on Friday. Good luck!