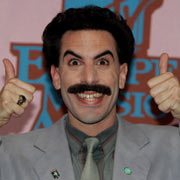 Fri-day! Yes! Sorry for the lack of posts today. I had a lunch thing to go to and I had to write the new SLAM newsletter, which is going out for the first time today. (If you haven’t signed up, you can do it right on the homepage.) Anyway, I wrote that referees thing last night to give you guys something to chew on. It’s funny, I watched the Spurs/Mavs and realized the referees were going to be a big topic today, and I was working on the referees thing and looked up to see Carmelo tossed from the game, right as I was in the middle of typing a sentence about Melo having been T-d up earlier. Creepy.

I mentioned this in the comments on the Chris Paul post, but if you missed it, Brand Jordan signed Chris Paul, Joe Johnson and Josh Howard today.

Since the SLAM crew has been working our butts off the last two weeks, posting night and day while shipping out the next issue of SLAM (available on newsstands in about two weeks), so Sam, Khalid, Omar and I took a field trip this afternoon to see Borat: Cultural learnings of America for Make Benefit Glorious Nation of Kazakhstan. And it’s an amazing, hilarious film. I don’t want to give anything away, but I spent half the movie laughing and the other half cringing, constantly waiting for the other shoe to drop. Most I’ve actually laughed out loud in a movie in a while. Go see it. You’ll laugh.

Actually, maybe Mark Cuban could go see it. Seems like he could use a laugh.

I’m out…catch you guys next week…