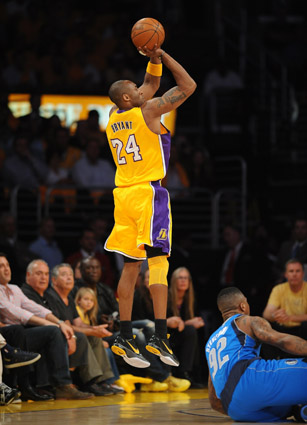 It isn’t often you see a press conference called over a sneaker. But early in December, 2008, that’s exactly what Kobe Bryant and Nike did.

Despite the scarcity of conferences, it still would have been easy to brush it off as an elaborate attempt to generate hype for Bryant’s fourth sneaker with Nike. But then, over the course of a short webcast intro, Mamba and the Swoosh unveiled just how they’d be flipping the script and revolutionizing the game.

The Zoom Kobe IV got lower and lighter than other kicks without sacrificing any of its functionality. Taking cues from soccer cleats, which manage to cater to stronger and more rapid cuts than typical shoes, the Eric Avar-designed sneak bolted forward and didn’t

Over the last three years, the low-cut silhouette has continued to evolve, getting lighter while trading out some materials for others. (Lunar foam went out with the IV, with heel and forefoot Zoom Air into the V. Flywire from the IV and V was upgraded to a three-layer Flywire setup for the ZK VI.) All of this, of course, worked further toward Kobe’s initial request of having a shoe that is merely an extension of one’s foot. The insoles of the ZK VI demonstrate this, with the phrase, “I want a shoe that molds to my foot,” spread out over the two feet.

Bryant wasn’t the first dude to rock low tops on the hardwood—far from it. Take a look, though, at the impact he’s had on NBA feet over the past three years: The Zoom Kobe IV, V and VI have essentially become the go-to sneaker for players in the League who don’t have their own signature models. Thinking of the NBA as its own democratic country, the players have spoken with their footwear choices and Kobe Bryant is the current president.

Before he became the Obama of the L, though, a teenage Bryant skipped the NCAA and landed Feet You Wear-first in the NBA, as a rookie with the Lakers and as an endorser for adidas. That pairing lasted the first six years of Kobe’s prolific NBA career, and though the adidas/Bryant relationship was moderately successful (Google “The Kobe Sunshine” for proof), things didn’t really rise to the next level until Kobe got low in 2008.

Through the 14 years we’ve gotten to kind-of, sort-of know Kobe, we’ve come to know his competitive side. As much as his (dwindling) number of detractors will complain that he’s a Jordan wannabe, Kobe is in the process of clearing his own path—one that’s Jordan-like, but still all Kobe. And as valuable as Pau Gasol was to the Lakers’ two Championships and three straight Finals appearances from ’08-10, Nike’s played the same role in helping Kobe blaze his tale and sneaker trail.

When he began rehabbing his image in the mid-2000s, at a point when most people in his situation would’ve hid or tried cleansing their image, Kobe created a lethal alter ego in the Black Mamba. Nike saw what he was doing, embraced it and used it as a key tool in Bryant’s image refinement. Working snake-like elements into Kobe’s shoes the last three years, in addition to crafting a sneak that was revolutionary in itself, Bryant is managing to do his own thing but still dwell in the realm of MJ. Diss him all you want, but KB is as calculating with the business side of his game as he is with the ball in his hands. He isn’t Mike, but he’s an awful lot like him—especially when it comes to seeking out those tiny little mental victories.

MJ already changed the shoe game on a cultural level that no one will ever match. But in each of the last three seasons, Kobe has changed the sneaker world on a personal level. In his heyday, Jordan was selective about who wore his signature joints. Kobe takes the opposite route, likely seeing it as each opponent and even teammate around him ceding to his superiority when they lace his kicks up. If players from every team across the Association wore your signature shoes, wouldn’t you look at it the same way?